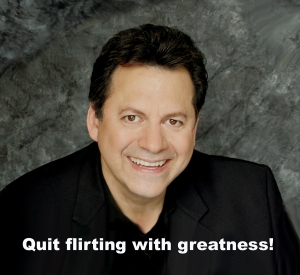 The fact is that we are either going to be a people of big plans or big excuses.  Will we be ready for this last great worldwide harvest of souls or will we allow years of shortages, rejection and fear to distract us?  Will we be found missing in action during the greatest display of miracles and revival in history?

There is a giant vision that is trying to find life within you right now.  You have the power to literally breathe it into existence. I know this is true because I know that right now God is scanning the world for helpers.  In this dark and evil day a loving God is preparing to display the grand finale of the human story.  It could be a season of harvest that could overwhelm the world for a decade maybe longer!

Who will be the irresistible Gospel mouthpieces of this final surge?  Who will be the powerful business people of God that will transfer the wealth of the wicked into the arsenal of the righteous?  Who are the impending Apostles of Faith, Wisdom and Love that will build great works and great armies for this global miracle?  Who are the intercessors that will graduate to the holiest place and tear down strongholds over nations? Who are the prophets that will roam the earth granting signs and wonders even as they declare righteousness?

I cannot shake the conviction that someone reading this right now is experiencing the power of the Holy Spirit and it is convicting them of compromise.  They know that they have chosen a limited life based on the wounds of their past and the threats of the future.  They know that they were born for something much bigger than the puny plans that presently control their life.

For now, we do not need to know where the money, the plan or the opportunity will come from to make our vision a reality.  What we must know right now is that we are not crippled by our culture, poisoned with grief, or blinded by adversity.  None of these things can stop us unless we let them.

Let me take you back to time in my life in Berkeley when I saw a smaller version of what is happening now.  Rioters had thrown rocks through our window nearly hitting a 6 month old baby in a crib.  This was after nearly two years of meetings that were interrupted by rioters and a constant shortage of funds.

I quit! The next morning I disbanded the staff and sent them all home.  I shut down Resurrection City, packed my belongings in a car and headed out of Berkeley never to return.  I arrived at Telegraph Avenue and by divine timing the light turned red.  Hundreds of students were heading to class right in front of my car.  These were the souls I was called to and I was leaving because of a big excuse.  My heart broke for these lost souls and I had to turn around and give it one last try.  That last try launched 8 more years of ministry that saw thousands saved and healed and a great revival on that infamous campus.

Don’t make small, affordable plans but prepare to launch out in the deep for a great catch.   WE ARE THE PEOPLE OF GOD IN A DARK TIME AND THERE IS ONLY ONE THING ON OUR MIND. IT IS A THOUGHT THAT PERMEATES OUR BEING, FORGES OUR PLANS AND OCCUPIES US CONTINUALLY…“IN THE LAST DAYS THE PEOPLE WHO KNOW THEIR GOD WILL BE STRONG AND CARRY OUT GREAT EXPLOITS.”  This is what matters.  This is the only fact that counts.  This is the only reality that has a right to influence us and guide our plans.

2 thoughts on “Quit flirting with Greatness!”