Last night the Santa Rosa Fire reignited.   Starting week 5 was uncharted waters for Mario Murillo Ministries. When we drove up to Living Word Family Church we had no idea of what to expect.  I had nagging questions in my spirit.  Would the crowds still come after all of this time?  Was it just a fad, a flare up of emotion, and not true revival fire?

Whatever doubts I had were completely erased as I pulled into the crowded parking lot.  People were charging into the building.  Boisterous singing was spilling out to the neighborhood.  It was a house filled with hearts on fire.

Pastor Larry King welcomed the people and then the worship team form Vertical Call Church led by Steve Peleo took us to heaven.  From the moment we began to sing, it was evident that this event no longer belonged to any man.  This is now divine property and there is no going back.

A supernatural cooperation exists here that should be a rebuke to cities were Pastors are guilty of turf wars.  This cooperation has already produced fruit.  The churches who are involved are reporting that their attendance is up and the people are on fire.

My message last night came from Romans 8: 32 “He who did not spare His own Son, but delivered Him up for us all, how shall He not with Him also freely give us all things?”  “I asked the people what would be harder for you to see your child die or for you to die yourself?  Now you can feel the heart of God the Father and His astounding and unspeakable love for us.”

Then I told them how mighty those 4 simple words are, “how will He not?  In light of the sacrifice that is beyond words, how can we think He will not heal, save, provide and protect?   This truth had an immediate impact on lost souls. 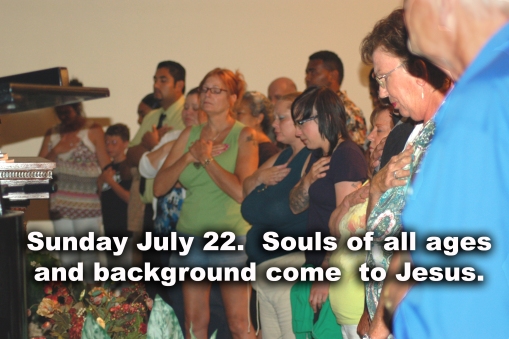 I called souls to Christ. We had the largest response of these meetings!

Andrea came forward to meet Jesus.  Later as she was walking back into the sanctuary, she was describing her need for healing to the head counselor.   No sooner did she sit down than by Spirit I was ordered to have her stand and then proceeded to list the very same diseases that she had just related to the leader.  She was overcome by the power of God and declared that she had no more pain!

Tonight the miracle continues and we cannot predict what is going to happen.  All we do know is that Christ commands this meeting and He will control the night!