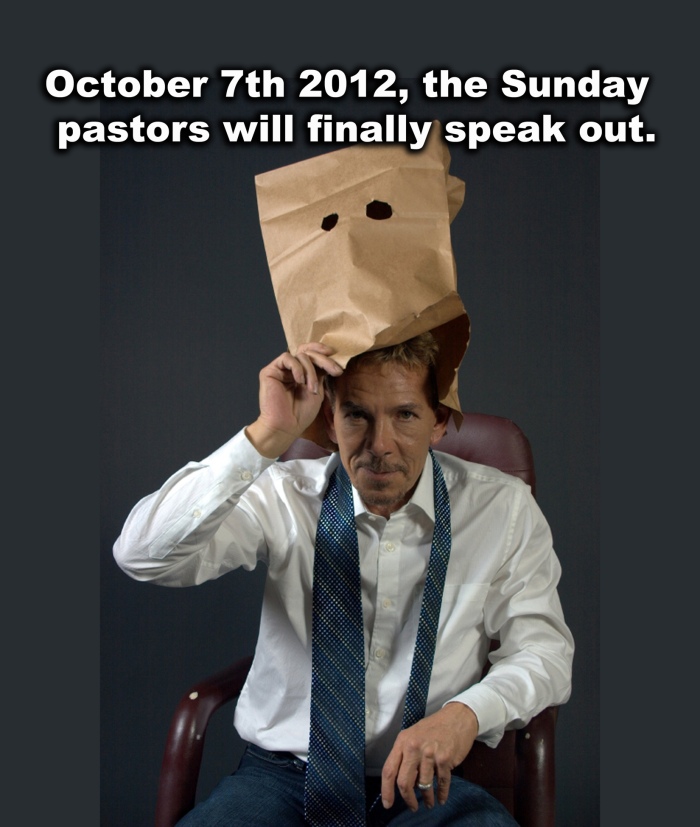 SILENCE IN THE FACE OF EVIL IS ITSELF EVIL: GOD WILL NOT HOLD US GUILTLESS.  NOT TO SPEAK IS TO SPEAK.  NOT TO ACT IS TO ACT.”  -Dietrich Bonheoffer

Today is Sunday October 7th. Pulpit Freedom Day.  Today in thousands of pulpits brave pastors will speak out about Obama record it, and send a copy to the IRS.  By this act of defiance they are confronting two great evils.

No one needs to tell you why the Church must speak out at this time.  Any pastor who says that they do not want to get political is practicing the worst form of politics.  They are remaining silent to save their jobs and to keep from losing members.   I cannot fathom a pastor who would rather lose a nation than lose a tither.

Dietrich Bonheoffer opposed Hitler when the complacent Lutheran pastors felt it was not their place to speak out.  Eventually it was too late to speak out.  I believe we are living out that same nightmare scenario in America.  We are watching a man run a campaign like a desperate crime boss.

He intimidates those who oppose him.  He forces agencies to change facts to suit his purpose.  He is given a complete pass from the media.   For example, Obama has already committed a crime that far exceeds Watergate.  Obama refused to send protection to our Embassy in Libya.  They begged for it and he said no.   Because of that, 4 American diplomats died.

The history of Johnson’s IRS gag order is instructive. It began with what some historians believe to be a fraudulent election of Johnson to the Senate in 1948. It has been maintained by both conservative and liberal historians that Lyndon Johnson’s election to the Senate in 1948 was won by massive voter fraud. Known as “Landslide Lyndon,” this aspiring politician was “elected” by only 87 votes. His challenger, Coke Stevenson, challenged his election and presented credible evidence that hundreds of votes for Johnson had been faked. Johnson, however, was successful in blocking Stevenson’s effort by the clever use of “cooperative” court injunctions.

In 1954, Johnson was facing re-election to the Senate and was being aggressively opposed by two non-profit anti-Communist groups that were attacking Johnson’s liberal agenda. In retaliation, Johnson inserted language into the IRS code that prohibited non-profits, including churches, from endorsing or opposing candidates for political office. In effect, Senator Johnson used the power of the go-along Congress and the IRS to silence his opposition. Unfortunately, it worked. Some in Johnson’s staff claimed that Johnson never intended to go after churches, only the two “nonprofits” in Texas. Nevertheless, his sly amendment to the tax code affected every church in America, and it is a violation of the First Amendment of the Constitution of the United States.

Under Obama, will this this gag order expand until the Gospel itself becomes illegal because of its effect on gays, Islam and socialism?   Do you really want to find out or do you want to follow Peter’s example today,   Acts 4: 18 Then they called them in again and commanded them not to speak or teach at all in the name of Jesus. 19 But Peter and John replied, “Which is right in God’s eyes: to listen to you, or to him? You be the judges! 20 As for us, we cannot help speaking about what we have seen and heard.”