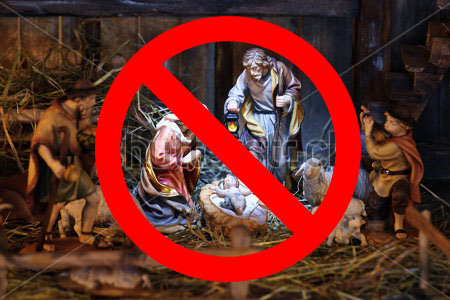 The city of Santa Monica can bar seasonal displays, including a Nativity scene that has appeared in Palisades Park for nearly 60 years, a federal judge ruled Monday.

In a closely watched case that has attracted national attention, Judge Audrey B. Collins denied a request from the Santa Monica Nativity Scenes Committee to erect multiple large displays depicting the story of the birth of Jesus in the park overlooking the ocean. The coalition of churches has erected the displays every December since the 1950s.

But last year, after requests for display spots exceeded the space allotted, the city held a lottery to allocate spaces. Atheists won 18 of 21 spots. A Jewish group won another. The traditional Nativity story that used to take up 14 displays was crammed into two.

Controversy erupted, and as a result, the city decided the lottery would become increasingly costly. Last June, the City Council voted to ban all private unattended displays.

In October, Nativity scene proponents filed suit in federal court to allow the traditional Christian displays to continue. In a 27-page tentative ruling, Collins denied the group permission to erect their displays this year while the case is pending.

“The atheists won,” said William Becker, attorney for the Nativity group. He then went on to compare the city to Pontius Pilate, the judge at Jesus’ trial, saying: “It’s a shame about Christmas. Pontius Pilate was exactly the same kind of administrator.”Santa Monica’s attorney, Barry A. Rosenbaum, said the city is “very pleased” with the ruling. The judge, he said, “understood the government interests and that [groups wanting to put up displays] have a number of alternatives to erect displays.”

All the parties are due back in court Dec. 3, when the judge will hear additional arguments in the case.