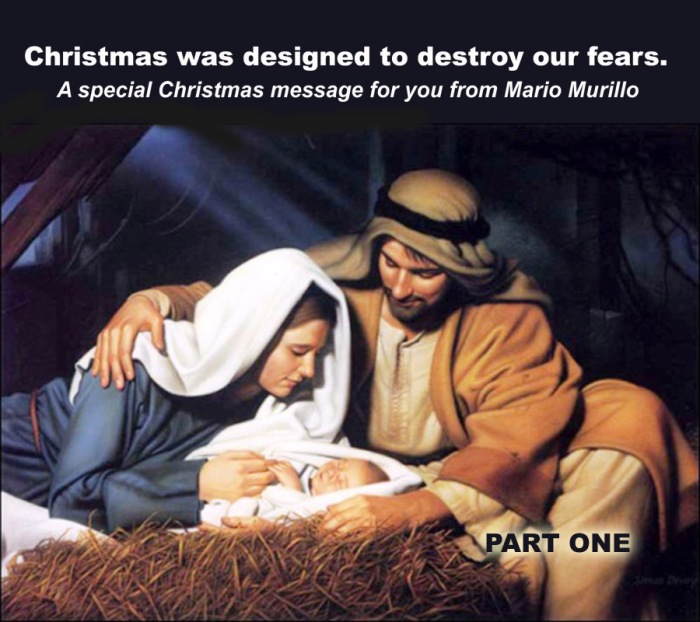 Christmas is designed to destroy our fears.

Imagine people gripped with panic and trembling at what might happen next.  Frantically, they seek ways to cope with the avalanche of terror.  Now there is the baleful knock of the wolf at the door!   The creature outside is the future, howling destruction!  Then just as suddenly, the house lights go up to reveal that this night terror is but a play.  Spontaneously, the audience and the cast retire to the grand lobby of the theater.  There they find a sumptuous feast awaiting them!   Celebration breaks out.   Laughter replaces weeping. Fond memories swallow fearful expectations.  The best music ever reawakens the innocence of childhood.  The delightful memory of simpler times overtakes them.  Aromas they have missed all year waft over them from the kitchen.  Silver bells ring out the call to rejoice; forget bills, aches, pains, threats and past hurts!  This is Christmas.  Everything is right with the world.

No one wants to leave the grand lobby to face the second act, however, they all must.  The cast will return to the stage and the audience will resume its place in the hard demands of everyday life and the din of modern times.  This time however, they know better. They return with a deep sense that the life they once feared is a temporary reality.  They carry in their soul the great hope that one day soon the Lion is coming to finish off the wolf and the house lights will stay up and of His reign there will be no end.

It is Christmas 2012 and not since October of 1929 have Americans felt this kind of fear.  This fear has spilled over to the Church as saint and sinner alike are cutting back on everything in anticipation of even more severe times ahead.  Many churches have let talented staff go and have halted vital services seeking to be wise with their dwindling resources.

In the face of such setbacks how should we celebrate Christmas this year?  Is a subdued, cut rate celebration is in order?  NEVER!  That kind of Christmas is way out of order.  We are not saying that you should load up your credit card and deal with the shock next year.  Nor are we prescribing a Disneyland denial.   Instead, we want a revelation of Christmas to overwhelm all of your fears.

December 25th is by definition a defiant holiday, a divine interrupter of worry and dread.

From the moment that the star appeared, a glorious triumph of the skies ensued and it interrupts again each year at this time.  (Before we go on, we must let you know how much we owe to my father in Christ, Ralph Wilkerson for the revelation that you are about to read.  Thanks Dad, for showing us the power of the Christmas.)

The Nativity is too big a miracle to adequately cover in any letter.   Instead, we want to focus on four amazing encounters with angels that prove Christmas is designed to destroy fear!  In fact, the Angels greeted each of the four main characters in the Christmas story with the very same greeting: FEAR NOT!  There is no doubt that fear was their primary target. When these heavenly visitors found each chosen vessel they confronted that person’s specific anxiety.  Then they instructed them to act against the grain of their dread and worry.   There were four different kinds of fear that the angel of the Lord attacked.  These also happen to be the fears that we facing now.   So, sit with us now.  Find yourself in the Christmas story and let an Angel touch your spirit.

The fear that God does not answer prayer!  Luke 1:11–14 “Then an angel of the Lord appeared to him, standing on the right side of the altar of incense. And when Zacharias saw him, he was troubled, and fear fell upon him. But the angel said to him, “Do not be afraid, Zacharias, for your prayer is heard; and your wife Elizabeth will bear you a son, and you shall call his name John. And you will have joy and gladness, and many will rejoice at his birth.

We are bombarded with images of dread.  So much of that we have taken for granted has vanished.  The things we counted on to help us climb out of debt are proving to be brittle handrails.  CEO’s have ravaged companies and destroyed the retirement of millions.  Politicians have lied and lied to cover their lies.  Both Republican and Democratic leaders look utterly incompetent to handle crisis at home and abroad.  Everywhere we look, we see another broken promise.  No wonder the devil tempts us to wonder if prayer itself will also fail!  We may ask “does God hear my cry? Has He forgotten the promises He made to me?  Will I find surpassing peace, tangible breakthroughs and victory over my threats if I keep on asking, seeking and knocking?”

If ever there was a poster child for this condition it was Zacharias the priest.  Luke chapter one shows us that he walked in integrity.   However, the cold, cruel world created by Roman occupation and the wicked compromise of his fellow ministers had hardened him with unbelief.  His acts of worship in the temple once drew deep reverence, expectation and wonder.  Now they were the perfunctory acts of a burned out man.  Even his prayer for the Messiah to come and deliver Israel was reduced to rote.  There is nothing more heart-rending to witness than a child of God mumbling catatonic prayers in quiet despair.

The warrior angel gloriously startled him to jolt him out of fear!  What an eloquent rebuke!  “Hey!  Wake up, God heard you, He never forgot!  I am here to set you back on course and to fulfill the deepest desire of your heart.  You are going to have great joy after all!”

The fear that you must put away your dream: Matthew 1:19-24 “Then Joseph her husband, being a just man, and not wanting to make her a public example, was minded to put her away secretly. But while he thought about these things, behold, an angel of the Lord appeared to him in a dream, saying, “Joseph, son of David, do not be afraid to take to you Mary your wife, for that which is conceived in her is of the Holy Spirit. And she will bring forth a Son, and you shall call His name JESUS, for He will save His people from their sins.” So all this was done that it might be fulfilled which was spoken by the Lord through the prophet, saying: “Behold, the virgin shall be with child, and bear a Son, and they shall call His name Immanuel,” which is translated, “God with us.” Then Joseph, being aroused from sleep, did as the angel of the Lord commanded him and took to him his wife.”

Joseph was an honorable man and he feared what society would do to the woman he loved.   Right now, Americans are afraid of what this crisis will do to the ones they love.  In a time when so many things seemed to have gone up in smoke it seems right to hunker down and brace ourselves for years of shortages.  Whether it is global warming or a moral cooling the logic of the moment seems to be to expect the worse.   He had night terrors voices that ran worst case scenarios in his mind.

Do you really want to prescribe a future of bleak limits to your children?   Everyone needs to know that their child will be safe on the way to school and on into their future.   However, children should not be warned to seek a career they can “fall back on.” They should be inspired to get a God given dream that they can throw their hearts into!   That kind of dream is so big that the facts don’t count and the flood of immorality will never stop it.

Not only this, but our children need to see us pursuing our dream.  We must remember that these hard times will not last but our dream will last.

It broke Joseph’s heart to think that he had to hide the woman he loved in order to save her.  While he was fretting over all of this the angel’s message loud and clear, “Do not fear current conditions. Why?  It was all summed up in this explosive statement: “what is conceived in her is of the Holy Spirit.”  Since your dream is of the Holy Spirit nothing can stop it!  Paul said “He that began a good work in you will complete it to the day of Jesus Christ.”

One thought on “How Christmas was designed to destroy fear.”