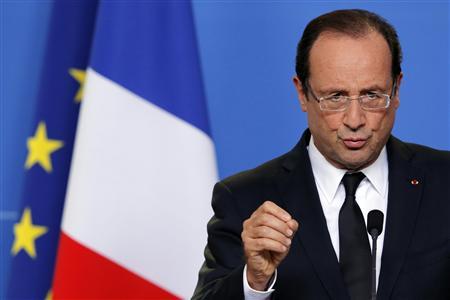 By Emile Picy and Catherine Bremer

(Reuters) – France’s Constitutional Council on Saturday rejected a 75 percent upper income tax rate to be introduced in 2013 in a setback to Socialist President Francois Hollande’s push to make the rich contribute more to cutting the public deficit.

The Council ruled that the planned 75 percent tax on annual income above 1 million euros ($1.32 million) – a flagship measure of Hollande’selection campaign – was unfair in the way it would be applied to different households.

Prime Minister Jean-Marc Ayrault said the government would redraft the upper tax rate proposal to answer the Council’s concerns and resubmit it in a new budget law, meaning Saturday’s decision could only amount to a temporary political blow.

While the tax plan was largely symbolic and would only have affected a few thousand people, it has infuriated high earners in France, prompting some such as actor Gerard Depardieu to flee abroad. The message it sent also shocked entrepreneurs and foreign investors, who accuse Hollande of being anti-business.

Finance Minister Pierre Moscovici said the rejection of the 75 percent tax and other minor measures could cut up to 500 million euros in forecast tax revenues but would not hurt efforts to slash the public deficit to below a European Union ceiling of 3 percent of economic output next year.

“The rejected measures represent 300 to 500 million euros. Our deficit-cutting path will not be affected,” Moscovici told BFM television. He too said the government would resubmit a proposal to raise taxes on high incomes in 2013 and 2014.

UMP member Gilles Carrez, chairman of the National Assembly’s finance commission, told BFM television, however, that the Council’s so-called wise men also felt the 75 percent tax was excessive and too much based on ideology.

Hollande shocked many by announcing his 75 percent tax proposal out of the blue several weeks into a campaign that some felt was flagging. Left-wing voters were cheered by it but business leaders warned that talent would flee the country.

Set to be a temporary measure until France is out of economic crisis, the few hundred million euros a year the tax was set to raise is a not insignificant sum as the government strives to boost public finances in the face of stalled growth.

Hollande’s 2013 budget calls for the biggest belt-tightening effort France has seen in decades and is based on a growth target of 0.8 percent, a level analysts view as over-optimistic.

Fitch Ratings this month affirmed its triple-A rating on France but said there was no room for slippage. Standard & Poor’s and Moody’s have both stripped Europe’s No. 2 economy of its AAA badge due to concern over strained public finances and stalled growth.

The International Monetary Fund recently forecast that France will miss its 3 percent deficit target next year and signs are growing that Paris could negotiate some leeway on the timing of that goal with its EU partners.

The INSEE national statistics institute this week scaled back its reading of a return to growth in the third quarter to 0.1 percent from 0.2 percent, and the government said it could review its 2013 outlook in the next few months.

Saturday’s decision was in response to a motion by the opposition conservative UMP party, whose weight in fighting Hollande’s policies has been reduced by a leadership crisis that has split it in two seven months after it lost power.

The Constitutional Council is a politically independent body that rules on whether laws, elections and referenda are constitutional.