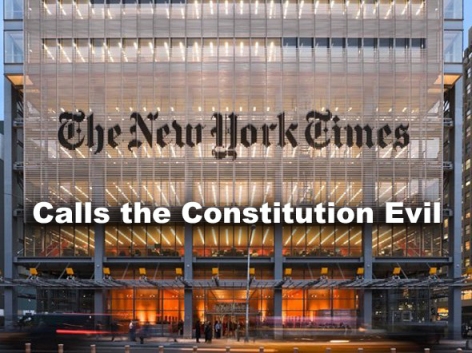 “Let’s give up on the Constitution” -New York Times.

“AS the nation teeters at the edge of fiscal chaos, observers are reaching the conclusion that the American system of government is broken. But almost no one blames the culprit: our insistence on obedience to the Constitution, with all its archaic, idiosyncratic and downright evil provisions.

Consider, for example, the assertion by the Senate minority leader last week that the House could not take up a plan by Senate Democrats to extend tax cuts on households making $250,000 or less because the Constitution requires that revenue measures originate in the lower chamber. Why should anyone care? Why should a lame-duck House, 27 members of which were defeated for re-election, have a stranglehold on our economy? Why does a grotesquely malapportioned Senate get to decide the nation’s fate?

Our obsession with the Constitution has saddled us with a dysfunctional political system, kept us from debating the merits of divisive issues and inflamed our public discourse. Instead of arguing about what is to be done, we argue about what James Madison might have wanted done 225 years ago.

As someone who has taught constitutional law for almost 40 years, I am ashamed it took me so long to see how bizarre all this is. Imagine that after careful study a government official — say, the president or one of the party leaders in Congress — reaches a considered judgment that a particular course of action is best for the country. Suddenly, someone bursts into the room with new information: a group of white propertied men who have been dead for two centuries, knew nothing of our present situation, acted illegally under existing law and thought it was fine to own slaves might have disagreed with this course of action. Is it even remotely rational that the official should change his or her mind because of this divination?

Constitutional disobedience may seem radical, but it is as old as the Republic. In fact, the Constitution itself was born of constitutional disobedience. When George Washington and the other framers went to Philadelphia in 1787, they were instructed to suggest amendments to the Articles of Confederation, which would have had to be ratified by the legislatures of all 13 states. Instead, in violation of their mandate, they abandoned the Articles, wrote a new Constitution and provided that it would take effect after ratification by only nine states, and by conventions in those states rather than the state legislatures.

No sooner was the Constitution in place than our leaders began ignoring it. John Adams supported the Alien and Sedition Acts, which violated the First Amendment’s guarantee of freedom of speech. Thomas Jefferson thought every constitution should expire after a single generation. He believed the most consequential act of his presidency — the purchase of the Louisiana Territory — exceeded his constitutional powers.

Before the Civil War, abolitionists like Wendell Phillips and William Lloyd Garrison conceded that the Constitution protected slavery, but denounced it as a pact with the devil that should be ignored. When Abraham Lincoln issued the Emancipation Proclamation — 150 years ago tomorrow — he justified it as a military necessity under his power as commander in chief. Eventually, though, he embraced the freeing of slaves as a central war aim, though nearly everyone conceded that the federal government lacked the constitutional power to disrupt slavery where it already existed. Moreover, when the law finally caught up with the facts on the ground through passage of the 13th Amendment, ratification was achieved in a manner at odds with constitutional requirements. (The Southern states were denied representation in Congress on the theory that they had left the Union, yet their reconstructed legislatures later provided the crucial votes to ratify the amendment.)

In his Constitution Day speech in 1937, Franklin D. Roosevelt professed devotion to the document, but as a statement of aspirations rather than obligations. This reading no doubt contributed to his willingness to extend federal power beyond anything the framers imagined, and to threaten the Supreme Court when it stood in the way of his New Deal legislation. In 1954, when the court decided Brown v. Board of Education, Justice Robert H. Jackson said he was voting for it as a moral and political necessity although he thought it had no basis in the Constitution. The list goes on and on.”

My reaction to this article by Mario Murillo

The New York Times is calling for the abolishing of the Constitution of the United States.  Beyond the obvious horror of such an idea there is a dark and sinister plan.   Even though the writer raises some valid questions about our constitution he is not being honest about his true intention and his connection to the Obama administration.

Here is how it works.  The White House looks for a vanguard scapegoat.   They look for someone willing to make an outrageous claim such as “abolish the constitution” and then let the chips fall where they will.   The idea is to let it percolate in the general public until it begins to lose its radical edge.

Joe Biden was a perfect foil for this.   His now famous, “I am comfortable with gay marriage remark,” we all now know was made intentionally and with approval from the White House.  Obama bought time by letting the dust settle before coming out in favor of this himself.

What you need to know is that Obama and the Democratic Party do in fact want to do away with our Constitution and have hacking away at it ever since they took control.

They went after the first amendment with gusto by bullying the Catholic Church.  Now they are not going to stop until they disarm every gun owner in the nation.

They can hide behind all of the rhetoric but the goal is clear:

-Dismantle American free enterprise and bring us into a global government.

-Remove the bill of rights so that government decides what goes on in our daily life.

-Disarm the public so that there cannot be any resistance to totalitarian government.

The pattern is clear.  Get rid of the America of the Founding Fathers.  Get rid of God. It is telling that this writer does not call for amending the constitution but abolishing it.   He finds no good in a document that has kept us free for over 2 and a half centuries.  That says it all!

If this does not drive you to pray nothing will.  God is still on the throne but He must use us in this urgent time!