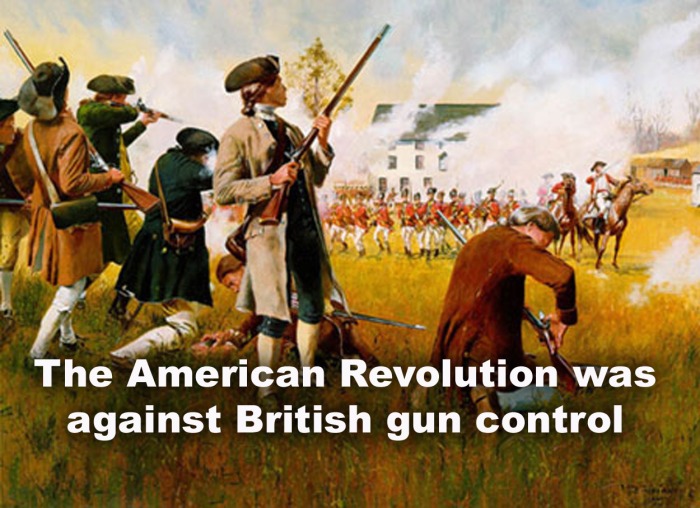 The American Revolution was against British gun control.

The following excerpt of illuminating history of gun control in America is by David B. Kopel,Research Director, Independence Institute, and Adjunct Professor of Advanced Constitutional Law, Denver University, Sturm College of Law.

This Article reviews the British gun control program that precipitated the American Revolution: the 1774 import ban on firearms and gunpowder; the 1774-75 confiscations of firearms and gunpowder; and the use of violence to effectuate the confiscations. It was these events that changed a situation of political tension into a shooting war. Each of these British abuses provides insights into the scope of the modern Second Amendment.

Furious at the December 1773 Boston Tea Party, Parliament in 1774 passed the Coercive Acts. The particular provisions of the Coercive Acts were offensive to Americans, but it was the possibility that the British might deploy the army to enforce them that primed many colonists for armed resistance. The Patriots of Lancaster County, Pennsylvania, resolved: “That in the event of Great Britain attempting to force unjust laws upon us by the strength of arms, our cause we leave to heaven and our rifles.” A South Carolina newspaper essay, reprinted in Virginia, urged that any law that had to be enforced by the military was necessarily illegitimate.

The Royal Governor of Massachusetts, General Thomas Gage, had forbidden town meetings from taking place more than once a year. When he dispatched the Redcoats to break up an illegal town meeting in Salem, 3000 armed Americans appeared in response, and the British retreated. Gage’s aide John Andrews explained that everyone in the area aged 16 years or older owned a gun and plenty of gunpowder.

Military rule would be difficult to impose on an armed populace. Gage had only 2,000 troops in Boston. There were thousands of armed men in Boston alone, and more in the surrounding area. One response to the problem was to deprive the Americans of gunpowder.

Modern “smokeless” gunpowder is stable under most conditions. The “black powder” of the 18th Century was far more volatile. Accordingly, large quantities of black powder were often stored in a town’s “powder house,” typically a reinforced brick building. The powder house would hold merchants’ reserves, large quantities stored by individuals, as well as powder for use by the local militia. Although colonial laws generally required militiamen (and sometimes all householders, too) to have their own firearm and a minimum quantity of powder, not everyone could afford it. Consequently, the government sometimes supplied “public arms” and powder to individual militiamen. Policies varied on whether militiamen who had been given public arms would keep them at home. Public arms would often be stored in a special armory, which might also be the powder house.

Before dawn on September 1, 1774, 260 of Gage’s Redcoats sailed up the Mystic River and seized hundreds of barrels of powder from the Charlestown powder house.

The “Powder Alarm,” as it became known, was a serious provocation. By the end of the day, 20,000 militiamen had mobilized and started marching towards Boston. In Connecticut and Western Massachusetts, rumors quickly spread that the Powder Alarm had actually involved fighting in the streets of Boston. More accurate reports reached the militia companies before that militia reached Boston, and so the war did not begin in September. The message, though, was unmistakable: If the British used violence to seize arms or powder, the Americans would treat that violent seizure as an act of war, and would fight. And that is exactly what happened several months later, on April 19, 1775.

9 thoughts on “The American Revolution was against British gun control.”