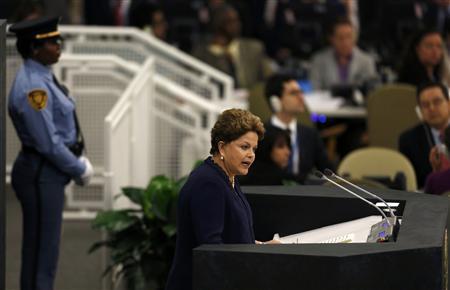 (Reuters) – Brazilian President Dilma Rousseff used her position as the opening speaker at the U.N. General Assembly to accuse the United States of violating human rights and international law through espionage that included spying on her email.

Rousseff had expressed her displeasure last week by calling off a high-profile state visit to the United States scheduled for October over reports that the U.S. National Security Agency had been spying on Brazil.

In unusually strong language, Rousseff launched a blistering attack on U.S. surveillance, calling it an affront to Brazilian sovereignty and “totally unacceptable.”

“Tampering in such a manner in the lives and affairs of other countries is a breach of international law and, as such, it is an affront to the principles that should otherwise govern relations among countries, especially among friendly nations,” Rousseff told the annual gathering of world leaders at the United Nations.

She also proposed an international framework for governing the internet and said Brazil would adopt legislation and technology to protect it from illegal interception of communications.

“Information and telecommunication technologies cannot be the new battlefield between states. Time is ripe to create the conditions to prevent cyberspace from being used as a weapon of war, through espionage, sabotage, and attacks against systems and infrastructure of other countries,” Rousseff said.

U.S. President Barack Obama was en route to the United Nations while Rousseff spoke. Speaking immediately after Rousseff, he avoided direct reference to her criticism.

“We have begun to review the way that we gather intelligence, so as to properly balance the legitimate security concerns of our citizens and allies, with the privacy concerns that all people share,” said Obama, who concentrated mostly on the crisis in Syria and the prospects for a diplomatic opening with Iran.

Rousseff rejected the U.S. government reasoning that the NSA surveillance was aimed at detecting suspected terrorist activity and she accused the agency of engaging in industrial espionage.

Rousseff said she had asked Washington for explanations, an apology and promises the surveillance would never be repeated.

Postponing the state visit was a rare and diplomatically severe snub by Brazil. While foreign leaders frequently visit the White House, state visits are reserved for special occasions and include an elaborate state dinner. No new date has been set.

Rousseff’s state visit was conceived to highlight cooperation between the two biggest economies in the Americas and Brazil’s emergence over the past decade as a regional power.

Ties between the United States and Brazil had been improving steadily since Rousseff took office in 2011. The cancellation could harm cooperation on trade, regional affairs and other issues at a time of growing influence from China, which has surpassed the United States as Brazil’s leading trade partner.

The trip had been seen as a platform for deals on oil exploration and biofuels technology, and Brazil’s potential purchase of fighter jets from Chicago-based Boeing Co.

A report by Brazil Globo’s news program Fantastico on National Security Agency spying was based on documents that journalist Glenn Greenwald obtained from former NSA contractor Edward Snowden. Greenwald, who lives in Rio de Janeiro, was one of the journalists to first report Snowden’s leaks of classified information on previously secret U.S. telephone and internet surveillance efforts.

“Personal data of citizens was intercepted indiscriminately,” Rousseff said in her U.N. speech.

“Corporate information, often of high economic and even strategic value, was at the center of espionage activity. Also, Brazilian diplomatic missions, among them the permanent mission to the United Nations and the office of the president of the republic itself, had their communications intercepted.”