A Night that Backfired on Satan.

Last night the largest crowd we have seen in Salinas surrendered to raw fire from heaven.  This was without a doubt the greatest single service in the last 20 years of my ministry.  Youth of all races rushed for salvation bringing the total that came forward in three nights to nearly 1,000.

At one point, a host of those who could not walk, bend or move because of disease, came to the front to dance, jump, run and demonstrate their miracle.

However, this greatest of all nights came very to being ruined by Satan.  It all started when Jesus said, “That young woman to your left, I am healing her.”  It turned out that she could not even stand up, let alone walk.  Her friend and an usher struggled to get her on her feet.

I knew I was to call her out and order her to stand but the miracle did not happen.  She simply stood there frozen with fear and struggling to keep her balance.  The whole audience was fixated on her.  Satan threw a wet blanket of doubt on the whole event.  He had come in a cold blooded attempt to keep people from hearing the Gospel and being healed! 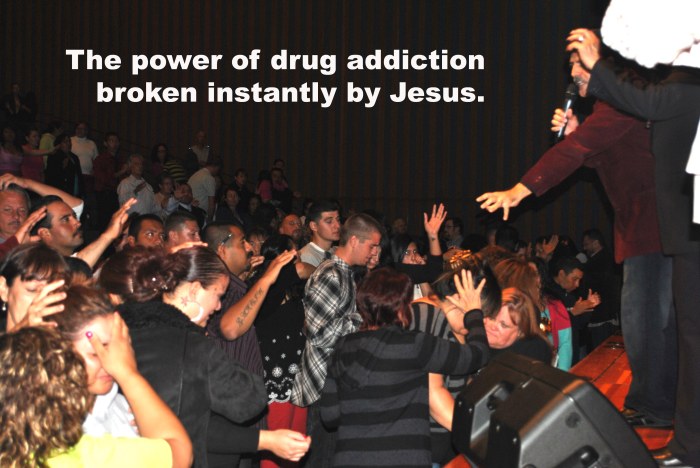 I had to do something fast or the meeting would be ruined! Instantly God granted wisdom.  I assigned workers to keep praying for her and I turned to the others that Jesus was healing.  The Holy Spirit began to grant details of diseases, startling details!  The blanket of doubt lifted and a cloud of glory descended.

If only you could have been there to see healing bursting forth with such force and freedom.  I am convinced that not one need was skipped and every sickness was touched by Christ.

Strong men fell before God weeping over the healing of their bodies.  Hearts, lungs, livers, just name an organ of the body and someone was soon reporting a healing of each and every one. The doubt Satan casted on the people backfired big time.

Then I received an audacious order from Jesus: “Tell everyone who is addicted to drugs to come to the front and they will be set free.”  I gave the order thinking how hard and embarrassing this would be for people.

To my astonishment, there was no hesitation!  Quickly the front was filled with youth wanting deliverance.  Then God fulfilled his promise as the Spirit of God drenched them with new life and a supernatural will to say no to addiction!

Those who came for deliverance were soon joined by other lost souls who simply wanted to be born again.  The hundreds who stood crying out for new life brought the total to nearly one thousand in three days.

How mighty was this meeting?  It was so mighty that we forgot about the young woman who could not walk.  But Jesus never forgot her.  There she was among the other souls at the front.  It turned out that the key to her healing in her body was a miracle in her soul.  The Blood of Jesus had cleansed her soul and now she could receive.  I looked down and saw her jumping up and down with glorious abandonment!  Satan paid dearly for attacking this meeting.

In conclusion: This outbreak in Salinas proves that in the midst of the great evil and darkness in America God is still at work in a mighty way to restore her!

P.S. What an honor to work with Pastor Alex Musumeci!  This fire will continue to blaze even higher under his leadership.  I look forward to the next LIVING PROOF outreach in Salinas!

3 thoughts on “A Night that Backfired on Satan.”