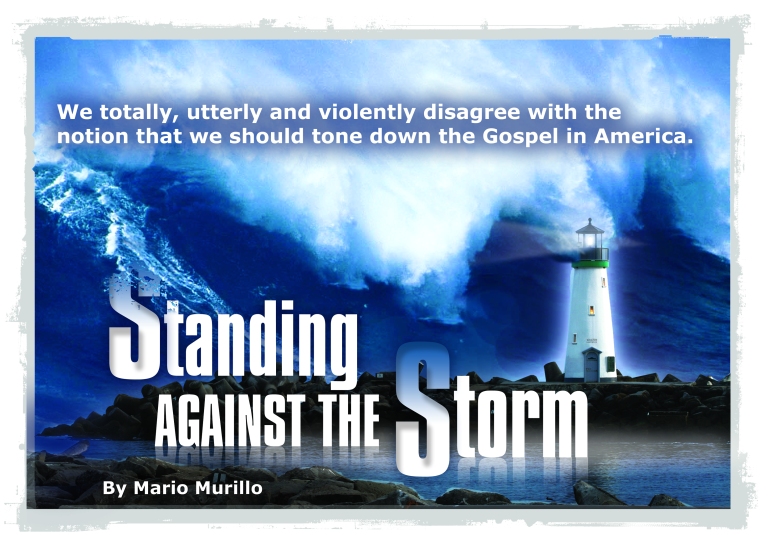 Ours is not an obscure message that should be whispered in the secret places of society.

We see things differently at Mario Murillo Ministries, mostly because of the way we were born. While still in high school I preached in the Haight-Ashbury, ground zero for the love and peace movement in San Francisco.  Moving to Berkeley sent us from the frying pan into the fire.  We were planted there for the next ten years.

For most of our early ministry, I rarely stood before an audience that actually wanted to hear what I had to say.  If this message had an iota of human origin, a speck of flaw in its nature or fantasy…the crucible of Berkeley would have blown it to smithereens.

Instead, unexplainable power appeared at each point where the ministry was threatened.  Something out of this world would always step in…providing words, resources, ideas and miracles exactly when we needed them.

Not once in that cauldron of revolution, did we feel the need to rebrand Christ or present a new and improved gospel.

For years there has been a rising tide calling for Christians to “keep your faith to yourself.”  Many modern pastors, including the Pope, have joined the chorus asking Christians, “to tone it down.”

Consequently, we have retreated into a cultural bubble where we do everything but preach the Gospel.  We have entertained, amused, inspired and distracted, but we have not converted America.  Because of this, the average Christian cannot defend their faith, marriage, or the Bible as the inspired word of God.

The original reason that the Church adopted this “indirect approach” was to get society to like us.  What we got was just the opposite.  Our compromised message has fueled greater contempt for the Church.

The media is now maligning the message of Jesus every day.  Francis Spufford said, “They think we believe in a load of Bronze Age absurdities. We promise the oppressed ‘pie-in-the-sky’ when they die; we are too stupid to understand why what we believe is irrational, and we are savagely judgmental.”

Atheists call us a threat to human progress.  Secular progressives condemn us as hating the poor, the homosexual and women.

How is it possible, that after all the work we put into removing the “offensive” parts of our message, that society is even more offended?  The answer is that there is a small but loud faction that hates Christ.  They are having their turn at the microphone because the hostility of the White House.

We violently, totally and utterly disagree with the notion that we should tone down the Gospel in America.  There are millions of innocent bystanders, who have not rejected Christ.  They are simply caught in the middle between haters telling lies, and the misfiring sermons of voices too timid to tell the truth.  We must take our message to these millions trapped in the middle. This is why the answer is not to “tone it down,” but to turn it up!

The same Holy Spirit that outfitted us to face the city of Berkeley will equip us to mount a fresh invasion of our nation.

Now let me get to the goal of this letter.  We have learned through every trial and breakthrough that God does not just give guidance, He also gives a plan.

We have a plan for 2017.  I can say without apology, that this plan has come to us from the Holy Spirit.  Again and again, the spirit of God has used events in the Bible as a model for what we should do. The verses below reveal a three-point plan that was given by an Angel to the disciples when the church was gravely threatened.

Acts 5: 17- 20 says, “But the high priest rose up and all who were his supporters, that is, the party of the Sadducees, and being filled with jealousy and indignation and rage, 18 They seized and arrested the apostles (special messengers) and put them in the public jail. 19 But during the night an angel of the Lord opened the prison doors and, leading them out, said, 20 “Go, take your stand in the temple courts and declare to the people the whole doctrine concerning this Life” (the eternal life which Christ revealed.)

Embedded in those simple words, are our instructions for 2017.  Follow me as I describe to you the plan for touching America this year.

1. Take a stand. We cannot judge other ministries.  We can only answer for what God asks us to do.  He has ordered us to take a stand.  There is no confusion about what the Angel is asking the men of God to do.  He is telling them to stake their ground in their nation.  This is not just a physical act; it is also moral and spiritual. We must take a stand against Satan’s agenda for America and we must take a stand for the Gospel of Jesus Christ.

We take a stand because we belong in the national conversation.  America has a drug, divorce, suicide, anger, and atheism problem.  Our voice needs to be heard because we carry the most immediate and effective cure for everything that is hurting America.  The Angel is reinforcing to the disciples that their message is valid and urgent.

2. Take your stand in the temple courts. Ours is not an obscure message that should be whispered in the secret places of society.  The temple courts were the heart of Jerusalem.  The Angel is blatantly instructing them to raise their voice in the very center of their culture.

In that same way we must go where the people are and where the biggest lies are being told.  The angel gave them an exact location to take their stand and that location spoke volumes to the Apostles.  God is serious about making a difference in the culture.

3.  Tell all of the words of this life. What a scathing rebuke to popular Christianity.  While Christian celebrities scurry to and fro to find buzzwords to replace the core doctrines of the Bible, here is an Angel telling the disciples that they must tell all the words of life.  They cannot leave out a single benefit or demand of the message of Jesus Christ.

If only we would learn to brave the offense of the Cross in our preaching!  We would find that very soon the supernatural life of God would overtake our preaching and create miracles in people that infinitely surpassed the results of popular preaching.  Society would not care about the demands in our message because of the changes they would see in their souls, minds and bodies.

This is what we will do in 2017.  In city after city, we will take a stand in the heart of that city and tell all the words of this life.

Pray with us and if your heart feels warmed to help us with a gift of love just click on the donation link below.   Never forget that we stand ready to pray for any requests that you leave in the comment page.
http://bit.ly/MMDonation

2 thoughts on “Standing Against the Storm of Compromise.”