A pair of surveys released on Thursday suggest that just one in 10 uninsured people who qualify for private health plans through the new marketplace have signed up for one — and that about half of uninsured adults has looked for information on the online exchanges or plans to look.

Taken together, the snapshots shown by the surveys provide preliminary answers to what has been one of the biggest mysteries since HealthCare.gov and separate state marketplaces opened last fall: Are they attracting their prime audience?

One of the surveys, by the consulting firm McKinsey & Co., shows that, of people who had signed up for coverage through the marketplaces by last month, just one-fourth described themselves as having been without insurance for most of the past year.

The survey also attempted to gauge what has been another fuzzy matter: how many of the people actually have the insurance for which they signed up. Under federal rules, coverage begins only if someone has started to pay their monthly insurance premiums.

And, the survey show, that just over half of uninsured people said they had started to pay, compared with nearly nine in 10 of those signing up on the exchanges who said they were simply switching from one health plan to another.

The second survey, by researchers at the Urban Institute and based on slightly older data from December, shows that awareness of the new marketplaces is fairly widespread but that lower-income Americans and those who are uninsured are less likely to know about this new avenue to health coverage than other people.

The surveys are not a perfect way of showing who exactly is gaining coverage, and whether the marketplaces are reaching parts of the U.S. population that need insurance the most. But they begin to fill in blanks that both advocates and opponents of the sprawling, 2010 health-care law all say are critical to understand.

“If there is one point to the law, it is to lower the number of uninsured,” said Larry Levitt, senior vice president of the Kaiser Family Foundation, a health policy organization. “Ultimately, that has to happen for the law to be judged a success.”

With just over three weeks remaining in a six-month sign-up period, the question of how many uninsured people are gaining coverage so far is eluding both Obama administration officials and most of the private health plans being sold through the new marketplaces.

Inside the Department of Health and Human Services, staff analysts who have been producing monthly enrollment updates are confronted with a major hindrance to examining the question of people’s prior insurance status: the wording of the HealthCare.gov applications themselves.

The paper versions of applications, used by a small fraction of people who are signing up contain a multiple-choice question asking whether people in a household currently have insurance. “No” is one of the boxes people can check.

However, the online application, used by most people to enroll, asks whether people want to apply for coverage but does not give them a place to indicate whether they have insurance now or have had it in the past. As a result, HHS analysts have no way of assessing how many of the online enrollees were uninsured n the past.

“We are a looking at a range of data sources to determine how many marketplace enrollees previously had coverage,” said Julie Bataille, director of the Office of Communication in the Centers for Medicare and Medicaid Services, the HHS agency overseeing the insurance marketplaces. “Previous insurance coverage is an important metric, and we hope to have additional information in the future.”

In the absence of information from people who have enrolled, Obama administration officials have drawn attention to recent outside polls, which suggest that the overall number of uninsured Americans is declining. It is not clear, however, whether the trend is because of the health-care law or other reasons. 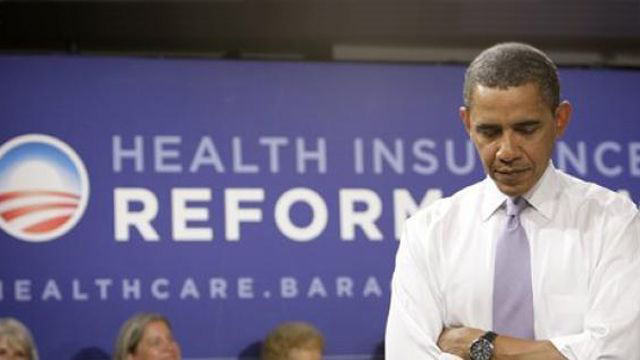 So far, of 14 states that are operating their own insurance exchanges, instead of relying on the federal one, only New York has given any indication about how many uninsured people are signing up. Last month, the NY State of Health, the state’s marketplace, reported that 70 percent of the half-million people who had enrolled since it opened in October were uninsured at the time they signed up.

The McKinsey survey, its fourth since late November to measure the behavior of Americans in the new insurance marketplaces, is based on a national sample of about 2,100 people. It shows that 27 percent of people who had bought coverage by early February had been uninsured, compared with 11 percent a month earlier.

It defined uninsured people as those who qualify for private health plans sold through the exchanges. It does not include anyone who is uninsured and has an income low enough that they qualify for Medicaid, a public insurance program that is being expanded under the law in about half the states. The Urban Institute survey includes people eligible for Medicaid in its definition of the uninsured.

McKinsey’s survey also includes people who bought insurance outside the new marketplaces. Asked at a conference on Thursday how many Americans are buying insurance on their own, apart from the new marketplaces, Gary Cohen, the outgoing director of CMS’s Center for Consumer Information and Insurance Oversight, said that federal health officials have not yet tried to collect such information. “I think it is a really important question because obviously the goal is to get as many people insured as possible,” Cohen said.

The McKinsey survey also found, as it had during the previous few months, that, of people who are uninsured and do not intend to get a health plan through the marketplaces, the biggest factor is that they believe they could not afford one.