It is easy to believe there was a curse on the Yuba City/Marysville region. This is a place of worsts. In 1976, Yuba City had the worst school bus accident in American history.  Lori Puente, one of the students from Yuba City High School who survived said, “We lost 28 students and a teacher that day. There was no one in our small town that was untouched very profoundly by this tragedy.”

In 1971, the worst serial killer was captured in Yuba City. “Juan Corona said he murdered and mutilated 25 farmworkers four decades ago because they were trespassing in the orchards north of Sacramento”, said Sutter County Assistant District Attorney Jana McClung.

Since then other “worsts” have befallen this area.  It had the first major school shooting in the nation.  It has the highest rate of student suspension and child abuse in California.  It is flooded with crystal meth.

For this and many other reasons, it would take a miracle unlike anything we had ever seen to bring Living Proof to Yuba City.

The Miracle of the Yuba

We have waited for years to be able to announce that a city in desperate need was truly rocked by Living Proof.  The miracle of the Yuba is that long awaited testimony.

Heaven had been bombarded with prayer for this outreach but we were still waiting for the breakthrough.  Every revival has an ignition point.  In Yuba City, it was when two churches linked hearts to touch their community.

The Bridge of Yuba City, led by Jim and Kristine Carpenter, and Church of Glad Tidings, led by Dave and Cheryl Bryan, brought the breakthrough we needed.

It takes every last drop of faith to keep a church strong in the Yuba City/Marysville area. They did not make this decision because it was convenient or even practical.  It was a sacrifice based on a passion for God to heal our land.  I want to thank them for their amazing act of love.

They not only provided workers, they cancelled their Sunday morning services to meet in the tent to win souls. Note to all Pastors: This kind of unselfish love will break the power of Satan over any region.

On Wednesday, June 10, at 7 PM we opened Living Proof to Yuba City.  This supposedly hardened community converged on the tent at the Fairgrounds.

Yuba City Mayor John Dukes opened with a mighty prayer and introduced me to the crowd.  A mayor and an evangelist standing together to bring life to a city—think of that!

Still, many scoffed at the idea that we would prove God was real to this wounded region.  But God was not intimidated. He was about to do the one miracle that would prove His love to this region.

He directed me to a young man on my right.  My orders were to tell him the following: “You have suffered a devastating loss.  It shattered your faith in God.  It made you physically ill and has placed a dark cloud over your life.” This young man had been in a terrible accident that killed his girlfriend.  That loss wrecked his faith and affected his health. 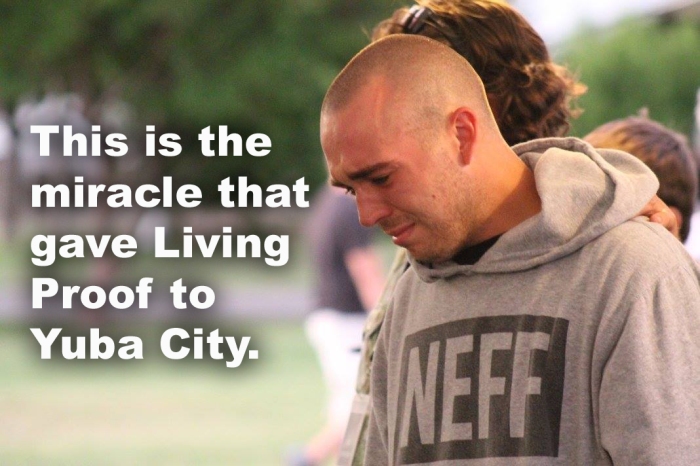 This picture that shows him breaking before God and receiving a miracle says it all.  In a city that is defined by devastating deaths, God chose to make an emphatic statement. The first healing was a healing of the ravages of tragic loss.  God would break the cycle of darkness for a new generation.  Yuba City now had Living Proof.

Later that night, I asked people to come to Christ.  The response was immediate and effortless.  A flood of young souls rushed to the front.  What a resounding rebuke to those “experts” who say American youth don’t want Christ.

How do I describe Living Proof Yuba City?  For the next 4 nights it was souls and miracles.  All ages, cultures and races came to experience the ultimate miracle in Christ. 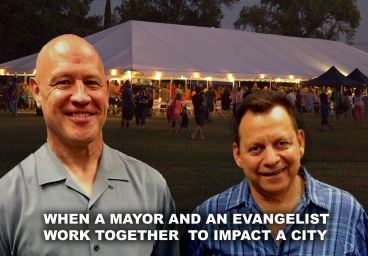 What healings have been reported?  You name it.  Cancer, diabetes, emphysema, and a host of life threatening diseases have vanished before the mighty hand of God.

Three people left their wheelchairs.  One man left his wheelchair and started dancing with his daughter!  At one point a blanket of power covered the crowd, and you could hear shouts of victory that pain and sickness was evicted from bodies everywhere.

But again, the real story of Living Proof Yuba City is about lost souls turning to God.  I looked out at the audience and saw a grandmother holding her sobbing teenage granddaughter.  The young girl saw miracles and felt power.  She and so many others like her were overtaken by hope and surrendered to Christ.

Friday night! The temperature at 7 PM was 106 degrees—WE WERE IN A TENT!  The scorching heat did not kill our attendance.  Instead, it was the biggest night with the greatest harvest.

A generation that walked in darkness has found that life is not a cruel accident; the universe is not a cold, abandoned expanse.  They have found their FATHER, a father who will care for them and lead them.

This is a good time to give you more good news:  We made our goal of $100,000!  I am so grateful to all who gave.  Living Proof is now our unambiguous present and future.

Doors are blasting open. Gay marriage, racial violence and a host of other issues are making our phones ring.  The invitations are consistently about turning the tide of immorality in America.   They want a Living Proof Crusade because it is more than words; it demonstrates the power of God. 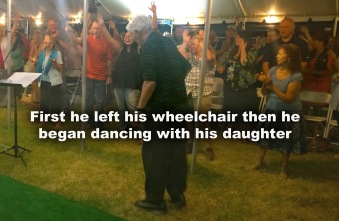 By redefining marriage, the Supreme Court violated the constitution. Justice Roberts even admitted, “This had nothing to do with the constitution.”  This blatant attack on the Bible raised the level of urgency level for Living Proof among pastors.

You, my friend, are in a unique position.  You can give to advance our cause and see to it that we seize every open door for the Gospel.  Your bold gift of love will have more impact now that it has ever had before.

Pastor Jim Carpenter said this about Living Proof Yuba City: “There is a dramatic shift in the atmosphere of our region.  Sleepy churches have been jolted by the signs and wonders; the streets feel the change; people who were walking by the tent to go get their drugs were instead pulled inside by the unseen hand of God and delivered. This community will never be the same.” Please help me take the proof to America.  Click below to donate to the cause.

3 thoughts on “The Miracle of the Yuba”