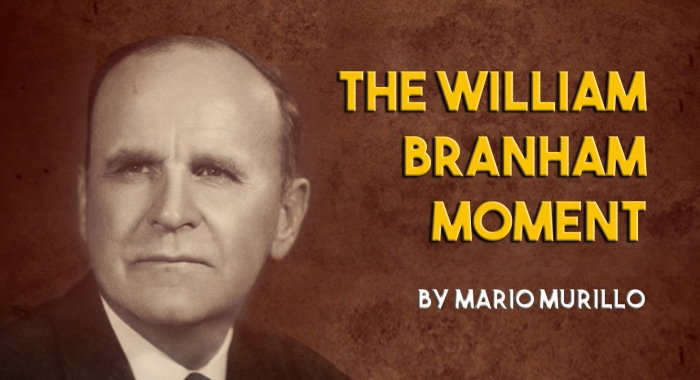 William Branham shocked the world by ripping the thin veil between science and the supernatural.  His ministry did not just bless…in many instances, it terrified.

In Los Angeles, a man with cancer stood in the healing line for hours.  While waiting, he witnessed every kind of healing imaginable.  However, when it was his turn for prayer the evangelist refused.  Indignant, the man demanded to know why.   Branham said, “You don’t want me to tell you.”  The man was now furious and refused to leave without an answer.   “You are sleeping with your secretary,” said the evangelist.  With that, the man dropped his head and rushed out of the meeting.

William Branham was an answer to desperate prayer and an act of love by God the Father.   The Pentecostal movement was dying because of infighting and immorality.

Divine healing had fallen into disrepute.  Meetings were often fraught with emotionalism.  Charlatans whipped audiences into frenzies.  Most healing testimonies were sketchy at best.

Things were also bad outside the church.  America was in the grip of fear of nuclear war.  Psychiatry was replacing faith.  A whole generation was racing away from God.   Preachers were at a loss about what to do about it.

Today, the Spirit-filled movement finds itself in the same predicament.  Once again, we are mired by division and emotionalism.   Only this time it is much, much worse…I’ll tell you more about that later.

1946: Enter William Branham.  The atmosphere is low key.  There is no attempt to manipulate the people.  Branham tells the audience when the angel of the Lord is present—a statement that should sound preposterous, except that astounding things start happening.

Oral Roberts once told me, “There were no hard cases for Branham while he was enveloped by the anointing.”  Growths vanished, lifeless limbs awakened, blind eyes opened.

An unlikely leader….his preaching was halting and simple beyond belief. But William Branham became a prophet to a generation. A small, meek, middle-aged man with piercing eyes, he held audiences spellbound with tales of constant communication with God and angels. Night after night, before thousands of awed believers he discerned the diseases of the sick and pronounced them healed.

Like few men have ever been endowed with the raw supernatural power of William Branham.  There, for the entire world to see–for medical science to test, were signs and wonders that were incontrovertible.

Branham’s innocence and simplicity would have been his demise had it not been for Gordon Lindsay.  Harrell said of Gordon Lindsay, “. . . more than any other man, [he] brought system and unity . . . contributing an orderly mind, keen business sense, boundless energy, badly needed literary skills and an ecumenical spirit.”

Together, Branham and Lindsay were used of God to birth an era.   A young Oral Roberts went to Kansas City to hear Branham.  The experience led him to resign his church in Enid, Oklahoma and obey God’s mandate to “take my healing power to your generation.”

In Portland, Oregon, T.L. Osborn sat transfixed by the word of the Lord from Branham.  This simple sentence from the lips of Branham launched Osborn: “God the Father heals the sick to prove that He raised His Son Jesus from the dead.

Just being used by God to launch Roberts and Osborn made him a vessel that touched millions.   But more than that…signs and wonders became a standard part of Spirit-filled soul-winning.

Now we have come to this terrible moment for the Pentecostal/Charismatic movement in America.  Compromise has hit us from the most unlikely sources.   A pandemic moral/political cowardice paralyzes our pulpits.  The wholesale removal of freedom of speech and freedom of religion has met only token resistance from “Spirit-filled” pastors.

Today we have widespread reports of “revivals” that are hugely disappointing.  In our heart of hearts we know they are total hype.  Healings are claimed but not confirmed.

We have witnessed the rise of an entire “revival” industry that hawks imaginary authority. People are reveling in spiritual fantasy worlds, blending astral projection and UFOs with Christianity.

Travelling ministries today sell high-pitch ecstasies that promise towering results over the enemy, but deliver zero impact on the culture.

I have my suspicions.  I wonder if the voices that scream revival the loudest are simply trying to drown out their own unbelief, or if the abuse of GRACE –that has pastors drinking hard liquor after church–is merely defeatism that says, “What’s the use in trying?”

The times are dark, so dark in fact, that they carry a strange hope.  Maybe we are finally, finally willing to shed the stubborn sins that have imprisoned us in religious irrelevancy and deception.

Perhaps we are witnessing the creation of a positive vacuum in Pentecostals and in society.  This is our best chance to save America.  This vacuum is making Charismatic/Pentecostals replace things. These replacements are the key to power.

Many believers are angry with politically correct preaching.  The cry now is, “Quit feeding us junk food!”  We want experience power, not a feel good message.  Look around you… the hunger for truth is rising.

A true desperation is replacing our attitude of entitlement.  Americans know that they are losing their future to our government.  They no longer harbor the fantasy that tells us we’re going to pull out of this just because we are America.

Many Christians realize that they have never known true desperation until now.  They don’t want church to make them feel good anymore, they want church to put them right and make them strong.  They want something real so badly that they will take it straight—not sugar-coated or diluted.

A true spirit of prayer is replacing artificial prayer.   Believers are waking up to the fact that they prayed wrong.  They had agendas in prayer.  Pastors prayed as if prayer was a booster rocket for their pet program.   Prayer is returning to the raw, unconditional surrender that it was supposed to be all along.

The real message here is not the arrival of a man but of an era of explosive miracles.  That is what I am sensing and expecting.   What we have been waiting for will come in an unexpected package—Branham did!

Maybe we have finally reached total desperation.   Maybe now we will trade the unreliable for the undeniable.   Let it be, Oh, God.

11 thoughts on “The William Branham Moment”