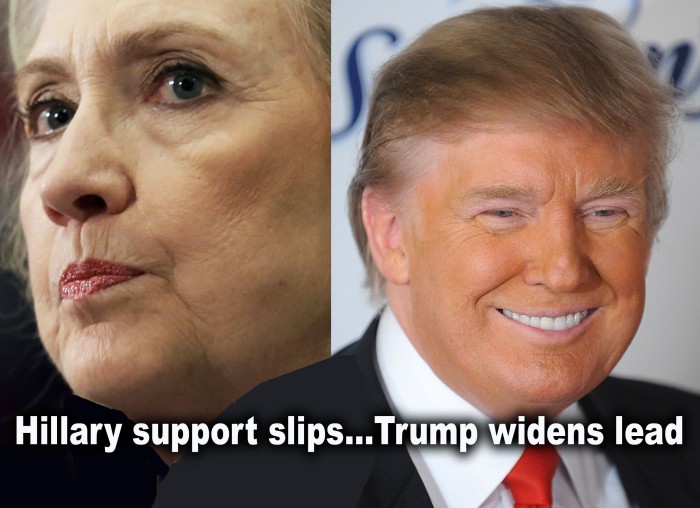 With just 21 days until the presidential primaries officially begin in Iowa, Hillary Clinton’s support among Democrats nationally has taken a serious tumble, falling eight points to 43%, according to the latest IBD/TIPP Poll. Support for her chief rival, Bernie Sanders, rose six points to 39%.

As a result, Clinton’s lead over Sanders, which had been 18 points, is now just four points.

Other polls have shown the race tightening in Iowa, which holds its caucuses on Feb. 1, and New Hampshire, which has its primary eight days later. Two recent New Hampshire surveys have Sanders in the lead, and the latest NBC poll in Iowa has Sanders just three points behind Clinton.

But the IBD/TIPP Poll is the first to show the race significantly tightening nationwide.

Clinton, in response to her sagging poll numbers, has started to turn up the heat on Sanders, after all but ignoring the self-described socialist whose maverick campaign has been surprisingly resilient. CNN reported over the weekend that “a sense of anxiety is cascading through Hillary Clinton’s campaign” over Sanders’ gains.

Clinton recently attacked Sanders on his position on gun control, and released a campaign ad in Iowa and New Hampshire asserting that she is “the only one” who can beat whoever the Republican Party nominates.

And on Monday, in a clear attempt to appeal to Sanders’ supporters, Clinton announced in Iowa her plans to impose a 4% “fair share surcharge” on incomes over $5 million. Sanders has proposed a series of tax hikes on the rich in the name of “income equality.”

The IBD/TIPP Poll shows that regionally, Clinton saw her support drop most in the Northeast (where it fell to 36% from 50%) and the West (37% down from 49%). Sanders now holds the lead in both places. Clinton support also tumbled among suburban voters, dropping to 39% from last a month’s 50%. And she has lost backing among moderate Democrats, falling to 44% from 58%. Sanders picked up 10 points among moderates, to 37%.

On the GOP side, Donald Trump extended his lead over his GOP rivals, with 34% now backing the real estate tycoon, up from 27%. His support is now nearly equal to his three closest rivals combined.