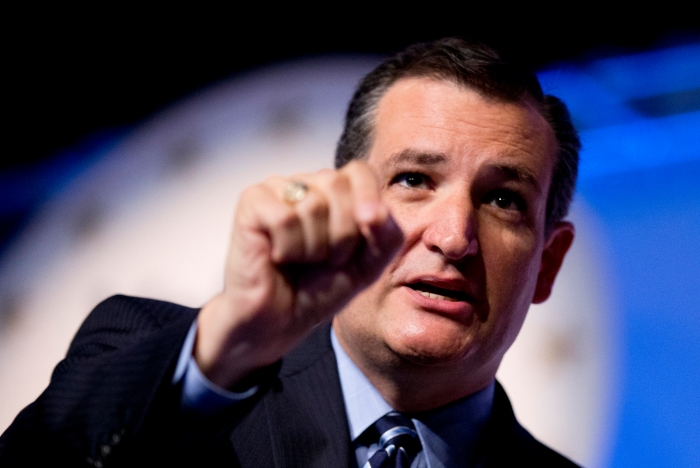 KEENE, N.H. — Sen. Ted Cruz’s campaign for president has featured strong references to faith and Christianity, which he says will help restore the country to greatness.

The Texas senator and son of a Carrollton pastor is sticking to religion, even in New Hampshire. The voting population there is heavy with libertarians and is not as influenced by evangelicals as the small towns in Iowa, where Cruz has had success in the polls.

“For too long there has been a spirit of fear and timidity in Washington,” Cruz told The Dallas Morning News on the second day of his New Hampshire tour. “We should not be ashamed of Christ. We should be willing to speak the truth with a smile.”

Cruz said the nation must return to its Judeo-Christian roots.

“Pulling this country back from the cliff we’re facing will require us remembering who we are, rediscovering those values that built America in the first place,” he said.

That has been Cruz’s mantra for months, and along the way he’s climbed in the polls for what’s fast becoming a two-way race with New York businessman Donald Trump.

In New Hampshire, he trails Trump by a wide margin. And though it’s not critical for Cruz to win the Granite State, doing well could give him a boost toward the GOP nomination.

“We should not be ashamed of Christ. We should be willing to speak the truth with a smile.”

Cruz’s message has largely been the same during the campaign, but the issues facing New Hampshire have prompted him to connect with voters in different ways.

During a stop in Keene, for instance, he talked about the substance abuse problem that killed his older sister, Miriam.

All day Monday, Cruz was asked about Trump, his admirer-turned-campaign nemesis.

Cruz fired back, sort of, saying voters would have the final opinion.

“Donald seems to be a little rattled. For whatever reason, he’s very dismayed. As conservatives continue to unite behind our campaign, as his poll numbers continue to go down, he’s a little testy,” Cruz said during a stop in Washington, N.H. “I have no intention in responding in kind. If he wants to engage in insults, that’s his prerogative.”

Not all Bible talk

Cruz was not all Bible talk. He promised to repeal the Affordable Care Act, investigate Planned Parenthood, abolish the IRS, and defeat the Islamic State and terrorism. But he also answered questions on issues specific to the Northeast, like the heroin crisis in New Hampshire.

“I know New Hampshire in particular has been hit hard. The heroin epidemic is really ugly,” he said. “This is an issue [with which] I have more than passing experience. My older sister, Miriam, died of a drug overdose.”

Cruz said later that his sister’s problems had a profound impact on him as a young man, as he and family members fought desperately to save her.

“She had a hard life. She made a lot of foolish decisions over and over again. She had problems with drinking and substance abuse her whole life until one morning she didn’t wake up,” he said.

“One of the most important elements to dealing with the drug problem is finally securing the border,” he said.

He said he would build a wall along the Mexican border.

Along with the wall, the U.S. senator from Texas would triple border patrols, establish an e-verify system for employers, develop a biometric entry-exit system for visas and enforce existing laws.

“We know how to do this,” he said. “The only thing that is missing is the political will.”

Voters wanted to know about the Trump-Cruz feud at every stop. The two had agreed not to attack each other during the primaries. But that changed when Trump questioned whether Cruz was a “natural-born” citizen and eligible for the presidency because he was born in Canada to an American mother.

On Monday, Cruz wasn’t backing down.

Cruz, for the first time publicly, criticized Trump’s support of eminent domain. The practice, in which a government can take property, is a big issue in libertarian-leaning New Hampshire.

Though he’s at the top of the polls in Iowa, Cruz trails Trump in New Hampshire, where the first-in-the-nation primary is Feb. 9.

“Dr. King’s legacy is powerful in many respects, but one is very, very clear. That is the power of speaking the truth in the face of evil

Most of those interviewed leaned toward Cruz or Trump.

But Sanders said he worried that Cruz couldn’t beat the Democrats in November, so he’s also considering voting for Trump.

Cruz was campaigning on Martin Luther King Jr.’s comemorative holiday, which nearly went unnoticed. After being asked about it by a voter, Cruz addressed the slain civil rights leader’s legacy.

At every point on his tour, Cruz asked voters to pray for him and the country, using one of Ronald Reagan’s favorite Bible verses, 2 Chronicles 7:14, as inspiration.

“If my people, which are called by my name, would humble themselves and pray, and seek my face and turn from their wicked ways, then I will hear their prayers and will forgive their sins and I will heal their land,” he said.