NO ONE WILL EVER BE THE SAME:  What happened in Houston

By Mario Murillo with excerpt from  Sandee Wichkoski

Todd White creates a mass addiction to—one on one—miracle soul winning.  Lou Engle performs a collective heart transplant—with the fire of God as his surgical tool.  Chris Burns and the worship weapons shift the atmosphere—translating us all to the throne of God.  In just 72 hours—people were utterly ruined to lesser living and powerless outreach.  They did not simply learn about LIVING PROOF.  They became LIVING PROOF.

Look at the shot of Todd declaring fire over a young man.  The look on that young man’s face embodies the convention. 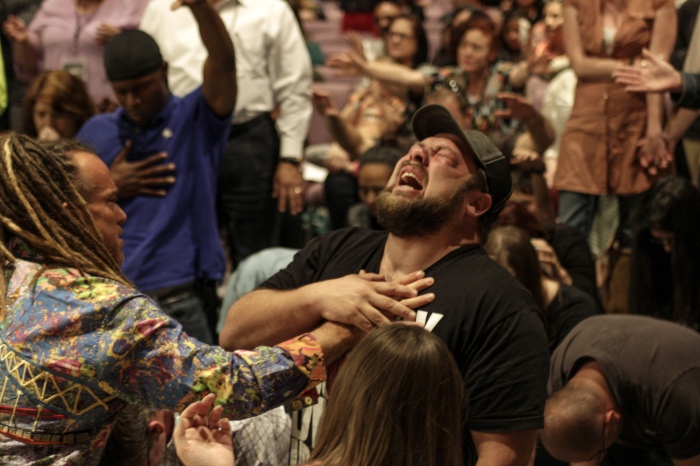 But for a real insight to the event it is best to hear—in their own words—the testimony of someone who was there.  Here are the words of Sandee Wichkoski:

“Richly blessed at the recent Living Proof World Convention in Houston. Each session built upon the next and the speakers were perfectly ordered to build a progression into a place of consecration for truly understanding the need this Nation has for God.

The worship with Chris Burns was amazing and absolutely essential to opening the atmosphere needed to accomplish the goal of heaven for this gathering. This wasn’t a “come listen to good worship, a message and get hands laid on you so you can feel good about your Christianity”. It was a direct challenge to get real and take your place in the ranks of the radically obedient.

Todd White started, on Thursday night sharing his testimony. As he progressed through that it lead to a hard reality of living in compromise: those around you see the wrong reflection of Jesus, a reflection that can affect them for eternity. As Todd closed he invited those who were living in compromise and compromising their witness of Christ to come forward and settle it at the altar. Before he even finished the invitation people were getting up and rushing forward, weeping and crying out to the Lord.  I was sitting back by the sound booth and it looked like over half of the congregation had gone forward.

This repentance, in the church among those who name the Name of Christ, was an important first step and essential key to being able to see and step into intercession with authority for this Nation which is what Lou Engle brought to the table on Friday evening. Lou’s message of surrender to the deeper call to empty ourselves for the sake of the Kingdom was a challenge to live differently, speak differently, and understand differently. His message requires that place of repentance, which simply means to turn and think differently, and consecration. It’s not about us, it’s about Him and His Kingdom in the earth.

That led to Saturday with Mario, seeing His Kingdom on display in word, signs, wonders and miracles and the challenge to get hungry enough to seek after that same manifestations in our own lives as that is the mark of a believer (Mark 16:17-18). There was a rich deposit of history with God imparted…not only from these men as a group but especially from Mario. There was a tangible covering and impartation from a Father of Revival that wasn’t a laying on of hands rather a corporate mantle that was gently laid across the people. A invitation to risk waking up to find ourselves clothed in power to bring tangible change to the world around us.”

One thought on “NO ONE WILL EVER BE THE SAME: What happened in Houston”