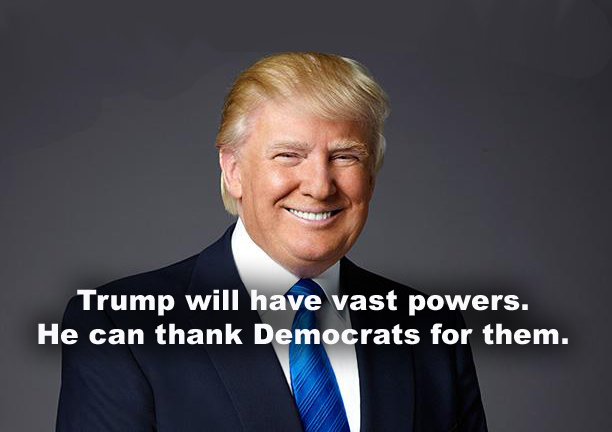 Trump will have vast powers. He can thank Democrats for them.  Liberals liked executive authority as long as Obama wielded it. Now they’ve set a precedent.

Glenn Greenwald: Trump will have vast powers. He can thank Democrats for them.

By Glenn Greenwald November 11
Glenn Greenwald, co-founder of the Intercept, led the NSA reporting that won the 2014 Pulitzer Prize for the Guardian. Liberals are understandably panicked about what Donald Trump can carry out. “We have a president-elect with authoritarian tendencies assuming a presidency that has never been more powerful,” Franklin Foer wrote this past week in Slate. Trump will command not only a massive nuclear arsenal and the most robust military in history, but also the ability to wage numerous wars in secret and without congressional authorization; a ubiquitous system of electronic surveillance that can reach most forms of human communication and activity; and countless methods for shielding himself from judicial accountability, congressional oversight and the rule of law — exactly what the Constitution was created to prevent. Trump assumes the presidency “at the peak of its imperial powers,” as Foer put it.

Sen. Barack Obama certainly saw it that way when he first ran for president in 2008. Limiting executive-power abuses and protecting civil liberties were central themes of his campaign. The former law professor repeatedly railed against the Bush-Cheney template of vesting the president with unchecked authorities in the name of fighting terrorism or achieving other policy objectives. “This administration also puts forward a false choice between the liberties we cherish and the security we provide,” he said in 2007. Listing an array of controversial Bush-Cheney policies, from warrantless domestic surveillance to due-process-free investigations and imprisonment, he vowed: “We will again set an example for the world that the law is not subject to the whims of stubborn rulers.”

Yet, beginning in his first month in office and continuing through today, Obama not only continued many of the most extreme executive-power policies he once condemned, but in many cases strengthened and extended them. His administration detained terrorism suspects without due process, proposed new frameworks to keep them locked up without trial, targeted thousands of individuals (including a U.S. citizen) for execution by drone, invoked secrecy doctrines to shield torture and eavesdropping programs from judicial review, and covertly expanded the nation’s mass electronic surveillance.

Blinded by the belief that Obama was too benevolent and benign to abuse his office, and drowning in partisan loyalties at the expense of political principles, Democrats consecrated this framework with their acquiescence and, often, their explicit approval. This is the unrestrained set of powers Trump will inherit. The president-elect frightens them, so they are now alarmed. But if they want to know whom to blame, they should look in the mirror.

Obama’s approach to executive power flipped so quickly and diametrically that it is impossible to say if he ever believed his campaign-era professions of restraint. As early as May 2009, Jack Goldsmith, a Justice Department official under George W. Bush, celebrated Obama’s abandonment of his promises to rein in these authorities, writing that “the new administration has copied most of the Bush program, has expanded some of it, and has narrowed only a bit.” He added that the “Obama practices will be much closer to late Bush practices than almost anyone expected in January 2009.”

By putting a prettier liberal face on these policies, and transforming them from a symbol of GOP radicalism into one of bipartisan security consensus, the president entrenched them as permanent fixtures of the American presidency. As Goldsmith put it, Obama’s actions were “designed to fortify the bulk of the Bush program for the long-run.”

Liberals vehemently denounced these abuses during the Bush presidency. From 2001 through 2008, Democrats called them the embodiment of tyranny, an existential threat to democracy, a menacing expression of right-wing radicalism. “America’s Constitution is in grave danger,” Al Gore warned in a widely praised 2006 speech on civil liberties. Bush had become “the central threat that the founders sought to nullify in the Constitution, an all-powerful executive, too reminiscent of the king from whom they had broken free.” In one 2007 poll, 57 percent of Democrats said they wanted the Guantanamo Bay prison camp to be closed.

But after Obama took office, many liberals often tolerated — and even praised — his aggressive assertions of executive authority. It is hard to overstate how complete the Democrats’ about-face on these questions was once their own leader controlled the levers of power. According to a 2012 Washington Post-ABC News poll, 53 percent of self-identified liberal Democrats and 67 percent of moderate or conservative ones now supported keeping Guantanamo Bay open. After just three years of the Obama presidency, liberals sanctioned a system that allowed the president to imprison people without any trial or an ounce of due process.

In fact, a new Democratic Party orthodoxy took hold under Obama: the right of a president to detain people, or even assassinate them, without charges or a whiff of judicial oversight. This included even American citizens. “We do not believe that [Anwar] al-Aulaqi’s U.S. citizenship imposes constitutional limitations that would preclude the contemplated lethal action” by the military or the CIA, a Justice Department memo proclaimed in 2010.

Democrats (who had bitterly complained in 2005 about mere eavesdropping without court approval) not only failed to contest this assassination program but ultimately expressed their support for it. “Fully 77 percent of liberal Democrats endorse the use of drones,” according to the write-up of that 2012 Post-ABC poll. Support drops “only somewhat when respondents are asked specifically about targeting American citizens living overseas, as was the case with Anwar al-Awlaki, the Yemeni American killed in September in a drone strike in northern Yemen.”

This same dynamic — Democrats endorsing vast expansions of executive powers — repeated itself time and again, both within the national security realm and outside it. Obama issued numerous signing statements purporting to nullify legal obligations, invoked radical secrecy privileges to avoid lawsuits, eroded long-standing Miranda rights for terrorism suspects, waged a war in Libya even after Congress voted against its authorization and pioneered novel means of using executive orders to circumvent congressional (i.e. democratic) approval in a wide array of domestic policy arenas.

And of course, Obama aggressively expanded the system of mass surveillance, including on U.S. soil, that had been secretly implemented by the National Security Agency after 9/11. Once Edward Snowden showed the world what had been created, many Democrats became the leaders in protecting this spying system from meaningful limits, reform or oversight. When, in the immediate aftermath of the Snowden revelations, a bipartisan coalition of House members headed by Reps. John Conyers (D-Mich.) and Justin Amash (R-Mich.) sought to impose serious limits on the NSA’s domestic spying, the White House turned to then-Minority Leader Nancy Pelosi (D-Calif.) to lead the successful effort to stop them.

Civil liberties advocates and proponents of limited executive authority tried everything they could think of to persuade and cajole Democrats to rediscover their concerns about these abuses and once again become allies in the battle to constrain government power. But those efforts were largely futile. Partisan loyalties easily subordinated any commitment to the principles that they had purported, in the Bush years, to support.

The problem such advocates encountered was the same one they’d faced during the Bush presidency when trying (and failing) to persuade putatively small-government conservatives to oppose these expansions of presidential power: namely, many people are perfectly content to have such authority vested in leaders they trust, and fear them only when a politician from the opposing party wields them.

As such, the tactic of last resort to induce Democrats and liberals to oppose such policies was to ask them to think about how, one day, these powers could be in the hands of someone other than a benevolent, kind-hearted, trustworthy progressive like Barack Obama. Instead, Democrats were urged, imagine that a right-wing authoritarian, or a lawless demagogue, or a petty, vindictive tyrant won the presidency and inherited the framework of unrestrained, unchecked powers that Republicans implemented and Democrats expanded.

That day has arrived. With Trump looming, there is much talk of uniting across ideological and partisan lines to impose meaningful limits on executive authority, and those efforts are justified. But, as progressives were repeatedly warned, a matrix of power that has been defended and legitimized for 15 years by both parties will be very difficult to uproot.