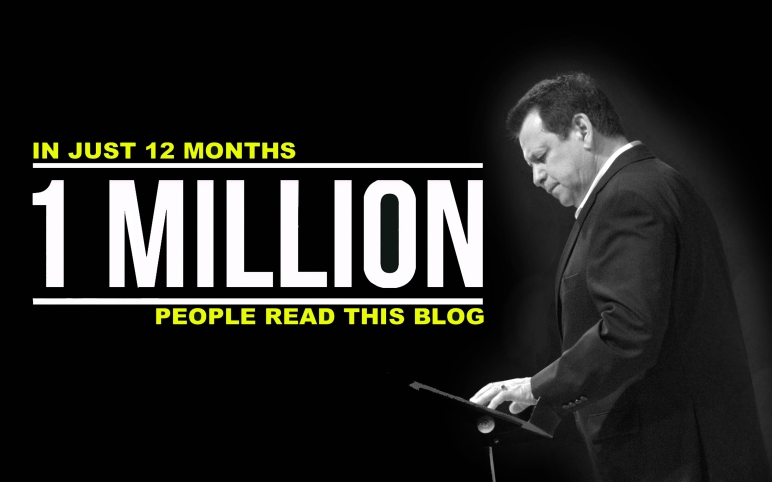 In a world instant gratification and video neurosis…this blog did something impossible…read what’s next!   In just 12 short months, one million people didn’t just view it…they read it!  When I began this blog 4 years ago, with the format that God told me to use, I could not see how it would succeed.  Now the total readership is in the millions.  A million thanks for making 2016 an explosive success.

My nerves were frazzled the first time I sat down to write something called a blog.  I argued with God.  I could not see how it would succeed. I knew there would be a firestorm over the things I was compelled to say.  I was right about the firestorm.

Now millions have read the blog in virtually every nation of the world.  Every day we are amazed at the impact of this little blog.

Check out this excerpt from the first time we spoke out:

“The America we once knew has been taken away.  It happened overnight.   Because America has changed ministries must change the way that they relate to this new nation.

Government has become our national God.   This new God is waging an incremental war on the Constitution.  The New York Times just called the U.S. Constitution an evil document that we should give up on.

Obamacare targets freedom of worship.  It forces Christian Institutions to violate their religious convictions.  Cardinal Dolan the spiritual leader of the Archdiocese of New York calls it “an unwarranted, unprecedented radical intrusion.”

The White House met with Cardinal Dolan and several Bishops met with the White House to talk.   He said he was told to “shut up and accept the mandate.”

It is time for the people of God to speak out on the danger of gun control.

Mass shootings have become the excuse to take away our guns.    Obama wants absolute power.

Mahatma Gandhi the great pacifist said, “Among the many misdeeds of the British rule in India, history will look upon the act of depriving a whole nation of arms, as the blackest.”

Thomas Jefferson and James Madison believed that the greatest threat to liberty was not foreign invasion or domestic unrest but rather a standing army and a militarized police force that had no fear of inflicting tyranny upon the people.

If Government is our new God, Celebrities are our new pastors.

Ben Stein asked, “Where did the idea come from that we should worship celebrities and we aren’t allowed to worship God?  There are a lot of us who are wondering where these celebrities came from and where the America we knew went to.”

Hollywood is the most powerful propaganda machine in history and it has declared war on our faith.

Ministries must change how they relate to America.  1 Samuel 10: 6 Says, “Then the Spirit of the Lord will come upon you, and you will prophesy with them and be turned into another man. 7 And let it be, when these signs come to you, that you do as the occasion demands; for God is with you.

Here is what I believe the occasion demands:

The Holy Spirit is saying we can publicly oppose government tyranny while still maintaining a loving witness.  Acts 16: 37 But Paul said to them, “They have beaten us openly, uncondemned Romans, and have thrown us into prison. And now do they put us out secretly? No indeed! Let them come themselves and get us out.”  Paul had just led a jailor and several prisoners to Christ and now he turns around and exposes politicians who have broken the Roman Bill of Rights.

We must accept the fact that there is a new generation that has no Christian orientation. “And also all that generation was gathered unto their fathers: and there arose another generation after them, who knew not the LORD, nor yet the works which he had done for Israel.” Judges 2:10

We must lay a new foundation of faith in America.  We must preach the central doctrines of our faith. The Bible needs to set fire to our sermons.”

The big question now is what does the church do now that Trump is president?  In new blogs I will open my heart to you about the radical steps the church must take to seize this greatest soul winning opportunity in our lifetime.  Once again we must change the way we relate to government.

I know we need fresh fire.  Prayer, repentance and waiting for new orders are the keys for the American church in 2017.

11 thoughts on “One million thanks”