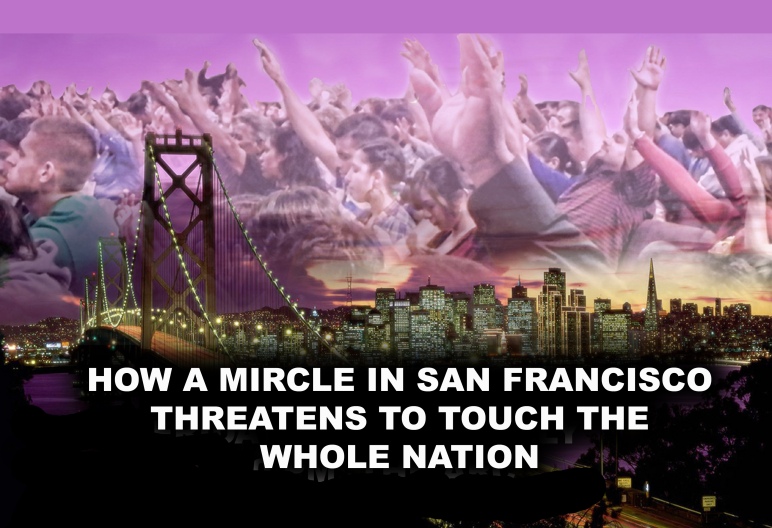 Only 16 years old, he lived in a refrigerator box in a squalid part of the city.  His miracle is tied to our destiny.   To survive, he sold his body to older businessmen.  He slept by day and worked the nights.

His father was a drill instructor for the military.  They lived 100 miles from San Francisco. When the boy admitted he was gay, his father punched him in the face and threw him out.  His last words to his son were, “don’t ever come back here.”

The boy took a bus to San Francisco.  It was not the paradise he expected.  It was cold, cruel, and humiliating.  A large cardboard box became his home.  Then came a night of miracles.

After a long battle, we got a permit to put up a tent in the China Basin area of the city.  Night after night, lost souls, addicts, prostitutes and gang members streamed into that tent and found Jesus.

On this night, the Holy Spirit gave me a strange but clear command: “Turn up the volume!” I resisted because I did not want to offend the audience.   God won.

I turned it up loud enough to be heard 4 blocks away.  That’s how far away the boy slept in the box.  It woke him up!

The boy wandered into the tent and heard my message on the love of God.  The Holy Spirit came and overpowered him with love and conviction.   He felt hope for the first time in his life. He raised his arms to God and received all that Christ wanted to give him.  He became a new creation.

The next day he took a bus home to his abusive father.  His dad saw him, flew into a rage and beat him again. “I warned you never to come back here again!”  With that the dad slammed door.

The power of God kept the boy from leaving. He sat on the porch until the sun went down.  When the old man fell asleep in front of the television, the mother quickly went out to the porch and snuck her son into his old bedroom.

The next morning, the father got up and demanded his usual breakfast from his wife. Before he could lift a fork, something overwhelmed him.

He put all his food on a tray and headed to his son’s bedroom.  He propped up his son on pillows, brushed his hair back, kissed him on the forehead and gave him breakfast. Then he said to his boy, “Son, I do not know what has changed you, but it is changing this whole family.”

The next day, I got the strangest phone call ever. A gravelly voice was cussing me out.  “I do not know who the %#@!* you are.  Something changed my son, and I have got to have what he has.  So don’t give me any &%#@ Religion.  Just pray with me to have Jesus!”  I did.

This was the first miracle—a miracle that would mark our destiny.

This miracle marked me so deeply that one day our primary weapon would be a tent.  I knew that it would take another miracle to start our tent ministry. The challenge of a tent ministry is so great that it had to remain a secret passion for decades.

Then, this last April, I was a guest of Rick Wiles on the global news network TRUNEWS.   We had just finished a radio interview.  He looked at me and asked, “Is there anything your ministry needs?”

Before I could answer, he asked, “Can you use a tent?”  With that he donated a beautiful, brand new 8,000 square foot tent and chairs—not just any chairs—1,000 plush folding chairs from the sky boxes of an NFL stadium.

It took two 60 foot semi-trucks to transport the tent, tent poles, and chairs from Vero Beach, Florida to Reno, Nevada.  Now we were forced to start our tent ministry.

However, we needed another miracle—a really big one.  I knew what the Word of God meant where it says, “see if I will not pour out a blessing you will not have room to contain.”  Finding the storage was nearly impossible—figuring out how we would move the tent and chairs and then set it all up was, in fact impossible.  We had no way to use our gift.

Enter Frank Saldana and Inner-city Action.  Get this: God led Frank to begin training his crew about tents before we met.  This powerful ministry that feeds and clothes untold numbers of the poor and homeless began retooling itself for a tent ministry.

Soon they had semi-trucks, drivers, generators, lights, staging, and most all—experience getting permits and setting up tents.

While we would focus on crusading to win the lost and heal the sick, Inner-city Action would feed and clothe the poor.  It was a match made in heaven.

Today is the first day of our first crusade in our new tent.  At 5 PM, we open in Fink White Park ready to meet all human need by the power and love of Jesus Christ.  What a day this going to be.

What started with one boy’s miracle in San Francisco, has the potential to touch an entire nation.