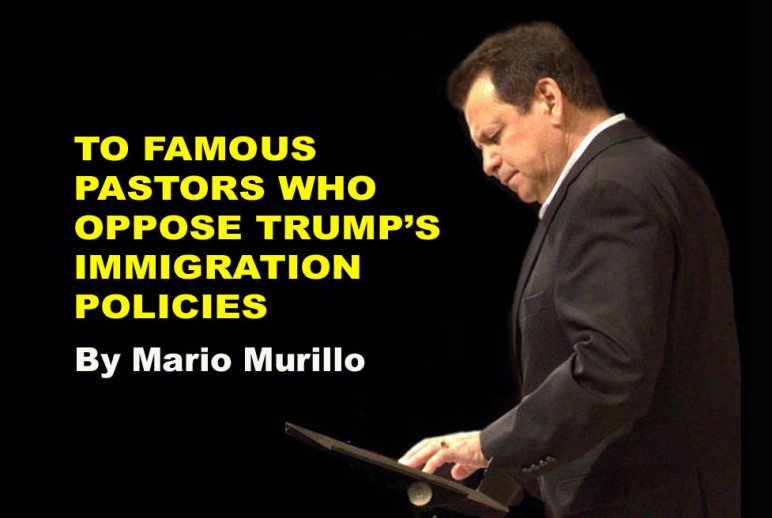 “Mario, you are more politician than evangelist”, said the preacher.  So, I asked him, “Why aren’t you speaking out against the policies that are destroying our nation’s morals?  He said, “I would lose people in my church.”  “In other words” I said, “you would lose votes.”  You’re the politician not me.

Notable Christian leaders, specifically Max Lucado, have stated that they did not speak out against Obama but have now chosen to speak out against Trump. Lucado found Trump to be rude and again, feels his immigration policy is anti-Christian.

It makes zero sense.  Obama was loading our children with debt.  Obama was the most hostile president to the Bible in history.  Obama gave us same sex marriage and fought to retain late term abortion.  Obama opened the Pandora’s Box of political correctness that has the racists calling everyone else racist, and the fascists calling everyone else fascists.  Obama is why our universities are a sick joke of intellectual dishonesty. Why are you vocal now and you never said a word to stop Obama?

The leader they gave a pass to was trying to drive the church underground, and the one we have now is the first president to address the March for Life and oppose the hideous Johnson Amendment that took away the free speech of pastors.  Trump is fighting to give you a pulpit where you can speak truth without the IRS shutting you down.  You oppose him now and were mum on Obama?

The most devastating charge against these pastors is this: they actively told their people not to vote for Trump.  Had they been successful—Hillary would be president today.

Now, dear pastors, you have moved on to attacking Trump’s immigration policies.  You don’t want a wall; you believe Jesus taught open borders.  That means that you have swallowed the Kool Aid of the left.

You are siding with sanctuary cities.  You are allowing a system that protects killers and punishes the American worker.  You are siding against your own congregation.  You are blatantly contradicting yourselves.

You once hid behind a bad exegesis of Romans 13 to justify your silence against bad government.  When you finally grew a conscience and realized civil disobedience is scriptural you waste it on the wrong argument.

Illegals have killed and they will kill again.  Democrats only want them here because they believe they’ll vote leftist.  Ask God if you are not pawns in their game.

Is it unchristian to secure the borders?  Let’s ask Jesus.  “But know this, that if the master of the house had known what hour the thief would come, he would have watched and not allowed his house to be broken into.” –Matthew 24:43