But now that we are losing our freedoms—now that the vile behavior of the back alley is on main street—now that families see the culture absorbing the faith of their children—believers may be open to finding authority over Satan.  But first, we need to call it war…war on the church.

When politicians ram through legislation like California Assembly Bill 2943 without informing the public—when they attack those with honest questions—when politicians say their new laws protect small groups when in fact they rip up the rights of others—what else can you call it?

To read more about this bill click here  https://wp.me/p1vrzp-5u2

What else can we call it when Senators manipulate language to vilify anyone who disagrees?  What should we call it when the real goal is not equality, justice, or truth, but an attempt to silence the church?  You call it war.

Way too many ministers taught easy believism and made Christians apathetic when they needed to take action.   Too many preachers today remind us, “it’s all in God’s hands.” While that is a comforting truth it is not the one we need right now.  That’s been an excuse to be passive and missing in action.

But everywhere you look in the Bible it is against passivity and advocates action: “fight the good fight of faith…” “Endure hardness as a good soldier…” “Resist the devil…” “Take the sword of the Spirit…” 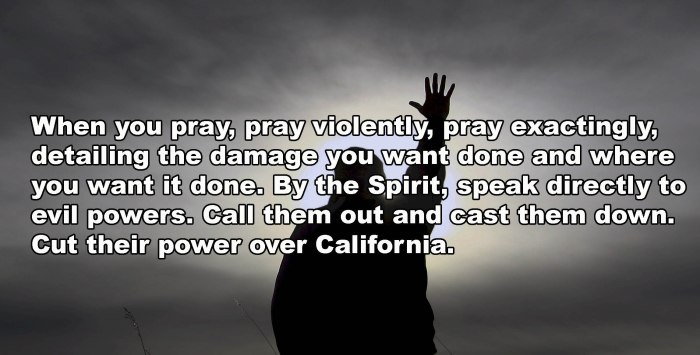 It is urgent that we pray in a way we have never prayed before.  Stand between heaven and earth as a true intercessor.  Invoke the Name above all Names to get to the very Throne of God with your petition.  Do what Moses did when he raised the rod of Aaron over the battle. When you pray, pray violently, pray exactingly, detailing the damage you want done and where you want it done. By the Spirit, speak directly to evil powers. Call them out and cast them down.  Cut their power over California.

It is time to preach with more boldness and miracles than ever before.  At the first attempt to silence the church Peter prayed this prayer:  Acts 4:29,30 says, “Now, Lord, look on their threats, and grant to Your servants that with all boldness they may speak Your word, by stretching out Your hand to heal, and that signs and wonders may be done through the name of Your Holy Servant Jesus.”

We cannot escape the urgency of revival in California.  California in its current condition can pull the nation down with it—but never forget Azusa Street, Billy Graham, and The Jesus Movement all had their start in California and then overflowed to America and the rest of the world.

Here is the great promise: When God sees someone take up the mighty weapons of God—in the Name of Jesus—and attempt the impossible—God will muster all of the resources of heaven to bring that someone total victory.

P.S.  For those of you who live in California and want to contact your state senator.    Use this link to find your state Senator.  http://senate.ca.gov/senators

When you email or call your Senator be firm but polite. Tell them you will be voting in the next election and that you will be campaigning for politicians who reflect your values.