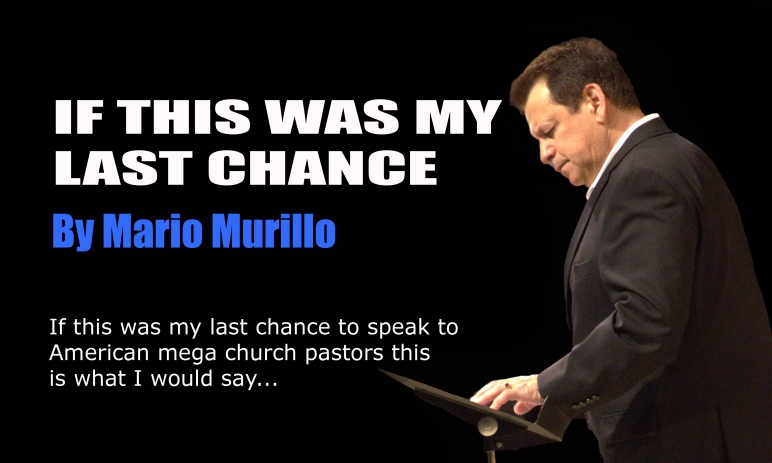 Dear Brothers and Sisters who lead big churches in America,

Leaving the truth out to avoid offending is a disaster.  When it is wildly successful, it is an even greater disaster.  Spurgeon said, “It is a very ill omen to hear a wicked world clap its hands and shout ‘Well done’ to a Christian man.”  Even in Spurgeon’s time, the world rewarded preachers for compromise.

The original Twelve were bold.  They preached letting the chips fall where they may.  No wonder they did. God was confirming their message with signs and wonders. Not only that, their preaching produced new creations of great joy, peace, and power. Our message was once contagious, catching on like wildfire, but now we resort to slick marketing to get society to listen to us.

Truth dispensed in love under the anointing has never needed such inducements. It never will.

The Bible teaches preachers not to offend unnecessarily. But true vessels of God have always understood that their message would awaken fury in some men. They disregarded popularity and even personal safety. They understood the difference between fulfilling a calling and trying to build a career in ministry.

Today we see a great evil in America. Congregations will enrich, yea they will elevate to superstar status any speaker who can eloquently keep the rightful demands of God off their backs.

Someone like me can be easily dismissed. When you take aim at vastly successful, far-flung Christian enterprises, you are easily rejected.   People will ask “how can you deny its effectiveness?” Or you hear them accuse saying, “You’re just being petty and jealous.”

But there are disturbing questions.  Is it petty to point out that this “success” coincides with America’s fastest moral decline? Is it jealousy to say that atheism and paganism have accelerated even as celebrity Pastors boast of their impact? Is it possible that in cheapening the Gospel we have paid a steep price?

There is another question. What might have been if we would have only trusted the Holy Spirit?  What if we had truly consulted and obeyed the One Who was sent to organize and direct the Church?  What would we look like now?

Preaching the entire Gospel releases power. 1 Corinthians 1:18 “For the message of the cross is foolishness to those who are perishing, but to us who are being saved it is the power of God.”

Romans 1: 16 “For I am not ashamed of the gospel of Christ, for it is the power of God unto salvation for everyone who believes…”

Why is the phrase “power of God” used in two verses that deal with the offense of the Gospel?  Because it is the power of God that drives home truth, even when it offends.

Paul understood the plan behind the offense.  As a top-flight intellectual, he was keenly aware of the God-designed offense of the Cross.  He refused to rely on his formidable skill in debate, saying instead: “4 And my speech and my preaching were not with persuasive words of human wisdom, but in demonstration of the Spirit and of power, 5 so that your faith should not be in the wisdom of men but in the power of God.” – 1 Corinthians 2: 4-5

The American Church will face a day of reckoning with American culture.  It is inevitable because the church and American culture will soon not be able to coexist.  Our society has become an open sewer, a bastion of banality where madness has the microphone.  We have the one message that should not be hidden or redacted.

With all my heart I believe it is not too late. But it is almost too late. I implore my brothers and sisters to repent. Let us present ourselves without reservation or hesitation to Almighty God.

The Pope showed Saint Francis the wealth of the Vatican. He said, “Well Francis, the church can no longer say ‘silver and gold have I none.’”  Francis replied, “And neither can it say, “In the Name of Jesus rise up and walk.””

Likewise, fellow preachers, we can no longer say that churches aren’t growing or prospering. But neither can we say that we have delivered the witness to America that God intended—and that is the only thing that can turn the tide.