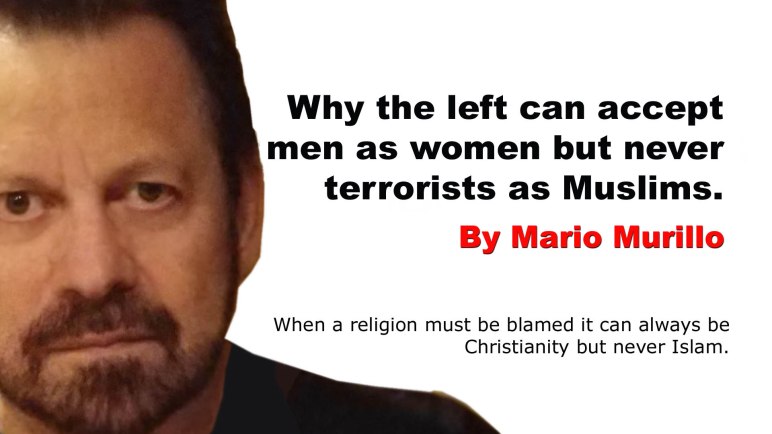 The Left accepts men as women, but not terrorists as Muslims.  “No. Not a single terrorist has ever been Muslim,” they assure us of this−despite the fact that the majority of terrorism in the world is done in the name of Allah.   To put it another way, all other religions in the world combined do not account for a minuscule fraction of the terror done in the name of Islam.

Why have I waded into this explosive topic? Actually, this is the beginning of a series of blogs that draw attention to clear threats to innocent believers. This issue is at the heart of church life now and will become even more so in the immediate future.

I will never regret this blog. In fact, I know that in future days I will deem this one to be among the most important things I have written.  I will always remember that while I was able to say something—I did say something.

How many innocent people have died because we refuse to face radical Islam?  Atrocities—unheard of before in history—are being committed against women and children.   But, according to the Left, not one of them is a Muslim—not even one!

It even gets silly. Politifact said that the photos of two Muslims who were laughing as Notre Dame was burning was a Photoshop fake. Forensics proved it to be genuine. Somali teens went on a rampage with hammers on a bus in Minnesota and the media totally ignored the entire incident!

Hillary Clinton actually said: “Let’s be clear: Islam is not our adversary. Muslims are peaceful and tolerant people and have nothing whatsoever to do with terrorism.”  NOTHING? Take a deep breath—and read that again—then answer this question: In what universe is that possibly true?

“Liberals Accept Men as Women, But Not Terrorists as Muslims. Liberals are perfectly happy to accept a man who “presents” as female, as a woman, and vice versa, but they won’t admit a terrorist who “presents” as Muslim is indeed a Muslim,” says talk radio host Rush Limbaugh.

Anything but Islam: Limbaugh cites the fact that liberals in government and media blamed the attack on the PULSE nightclub and gaybar in Orlando on Republican opposition to same-sex marriage and other issues, rather than the truth, that the attack was inspired by radical Islamists. Those on the Left completely ignored the fact that Omar Mateen, whose massacre left 49 dead and 53 injured, was heard to pledge allegiance to ISIS during the shooting.

Obama fixated on gun control laws in light of the Orlando shooting but didn’t want to get to the root of Islamic influence (of course not).   Focusing on the inanimate object used by a madman only prevents innocent people from being able to defend themselves and tips more situations in favor of terrorists.

Limbaugh said, “Men and women who want to “present” as the opposite sex can tell Democrats that that’s who they are, and there’s no doubt whatsoever,” Limbaugh said. “Somebody comes along and says, “I’m a Muslim! I don’t like you! I don’t like the fact you’re an infidel. I’m gonna blow up every institution of yours I can.” Then the Democrats say, “I’m not sure that we’re dealing with Muslims.” Limbaugh adds, “Isn’t it amazing?”

On the other hand—Limbaugh observed—when religion is blamed, it is Christians who come under fire. In fact, when a religion must be blamed it can always be Christianity, but never Islam.

“Yes, Christians, whether they know it or not, threaten homosexuals,” Limbaugh said. “Threaten! Heck, Christians threaten everybody, and that’s why people are not ‘themselves.’  Christians are to blame for every aberration taking place in this country.”

Are you looking for an explanation for this insanity?  Do you want to understand why Obama, while President, imported one million Muslims into America? Are you ready to grasp the reason why we can’t take steps to uncover the growing network of terrorists in our nation?

Need I explain why Biden would do for America what Obama did for our embassy in Benghazi?  He would ignore cries for help.  He would deny a security problem exists.  He would blame a video, or Christians−anything other than Islam.

So why do Democrats protect Islam at all cost, and accuse Christianity at every turn?

Why, you ask?  Because 85% of Muslims vote Democrat…

JOIN ON FIRE BELIEVERS FROM ALL ACROSS AMERICA. BE PART OF A NEW AMERICAN MIRACLE.  IT’S FREE BUT YOU MUST REGISTER CLICK HERE NOW: