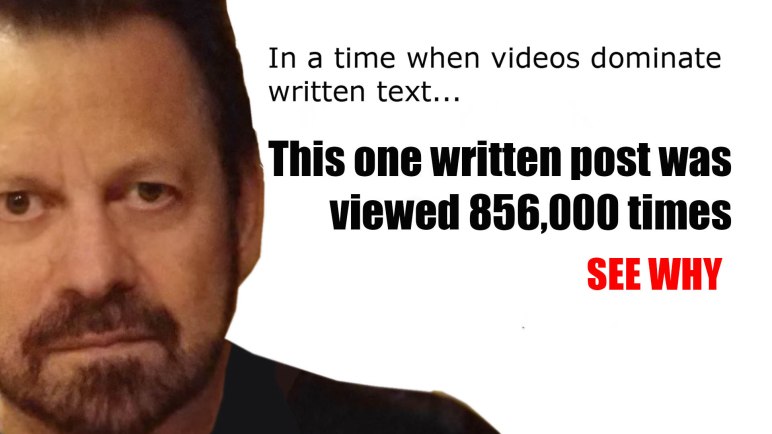 The results of this post are almost unheard of.  Read it for yourself…

There are Christians who hate Trump.  Let’s call it for what it is: hate.  It is their hate—which is very strange for those who name the name of Jesus—that dulls their ability to see the inaccuracy of their comments and their myopic views.

Now, I must clarify something, lest I incur the wrath of Trump supporters.  I am not calling Trump a pagan king—I’m sure he is much more moral than his enemies realize—I am saying that if Daniel could work with ‘Nebbie,’ how much more can we work with the Donald.

I have tried very hard to figure out what causes believers to hate Trump.  Our side won a long overdue and miraculous victory at the polls, and yet these believers choose to aid and abet the other side.  Is it because their favorite “Christian” didn’t win? Is it a case of sour grapes?They didn’t require any President to be a squeaky clean pastor, until Trump.

Yes, his tweets can be a bit much.  And okay, President Trump is not as smooth as Reagan…but, maybe we don’t need smooth right now.

Here is something else that is really strange, (hypocritical is more like it): why didn’t these guardians of morality speak out against Obama?  T.D. Jakes even attacked Franklin Graham for questioning Obama’s Christian Faith.  Jakes told him not to judge a brother.  Hold that thought as we explore another question…

How could you not question Obama’s Christianity?  Obama begged the question by dropping the Christian-card whenever it suited him (something Trump never does).   Meanwhile, Barack fought for same sex marriage, late term abortion, gave billions to Iran, and was the most Biblically hostile President in our history.

Back to Jakes.  So why do so many Christian leaders—who said it was wrong to judge Obama—judge Trump?

Trump is not a pastor.  He is a businessman who loves America.  As far as his faith?  I am not qualified to determine his spiritual depth, since I’ve never had the chance to meet the man. But there are many photos of Christian leaders laying hands on the President, praying for him, and he is cooperating.

“He is like Hitler and the church is being fooled,” said another comment.  At this time, those of you who are wearing tinfoil hats, please remove them, and listen.  Hitler never had 98% of the media against him.  Trump has never called for a new constitution.  Hitler never tried to protect Israel.  I could go on and on.

God has done a miracle and the enemy wants to make short work of the amazing breakthroughs we are witnessing by dividing the church.  Instead of being a religious outlier you should be thanking God, praying for and supporting the President. And voting for righteousness, and against the enemies of freedom.

1 I exhort therefore, first of all, that petitions, prayers, intercessions, and thanksgivings be made for all men, 2 for kings and all who are in high office, that we may lead a quiet and tranquil life in all devotion and dedication (to God). 3 This (is) good and acceptable before God our Savior, 4 Who wishes all men to be saved and to come to a full knowledge of (the) Truth. – 1 Timothy 2:1-4

THIS EVENT IS FREE BUT YOU MUST REGISTER. USE THE LINK BELOW…