Trump’s Tweet was not racist, but Nancy Pelosi’s statement was. She said that Trump was trying to make America white again. That is a patently racist remark. Only the Left gets away with making a racist remark while voting at the same time to condemn a Tweet that was not racist. Are you still there?

Trump should not back down from his Tweet about ‘the Squad.’ The Republican members of the House should not vote to condemn Trump. Trump is right to offer the Squad a return to their home country if they hate America.

Millions agree with this sentiment.  Millions of us feel that politicians who have been rescued from horrendous situations and who then call America evil—those who spout anti-Semitic taunts, and whose home nation is ten times worse—should consider going home.   The President correctly pointed out that if you are indeed a crusader against poverty, injustice, and oppression, the nation you fled is a prime candidate for your crusade.

Ilhan Omar said “I’m embarrassed and ashamed to live in this hypocrisy.” Okay then: why is she here?

Americans know ingratitude, arrogance, and ignorance when they see it. They see the Squad as flat out liars, who have zero good to say about America.

If there is racism in this at all, it comes from this Squad of politicians. In their bubble, the white male is the axis of all evil.  How is that not racist? We have the impossibly ironic and insanely amusing situation of people who have made undeniably racist remarks being seen as victims of racism.

Mark Levin said, “Her lack of gratitude and appreciation for America is repulsive. It’s no wonder why the media, such as the NY Times, love these provocative Congresswomen and it stems from their abysmal failure to the American people on their coverage of the Holocaust. Later, Pastor John Hagee’s comments that America is slipping away from Godliness toward self-dealing and secular humanism, which is contrary to the principles of our founding. Finally, Speaker Nancy Pelosi was accused of racism, was defended by Trump, and fired back labeling him a racist today.” 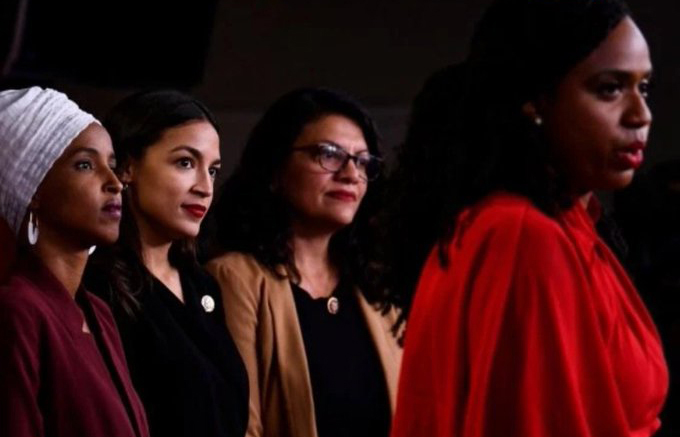 Nancy Pelosi is now possibly the most desperate politician in American history. She is flailing from one extreme to another in a blind search for a magic bullet with which to destroy Trump. She swung from correcting the very Squad she now defends, to attacking it, all within a 24 hour news cycle.

Here is what Nancy’s actions tell us: One day, she worries that alienating the Squad will offend Progressives. The next day she worries that the real America isn’t at all what left-wing news and social media say it is.

But she knows even more. She knows socialism is a bust. She knows millions are weary of political correctness. She destroys innocent reputations and calls for silly boycotts of even the most innocent companies and products. Americans are sick of the Left portraying everything they don’t like as being racist and Nazi.

Americans are outraged and nauseated by flag burnings and by athletes like Megan Rapinoe who make it ‘all about them.’

Americans see how Facebook, Twitter, Google, Instagram and YouTube insult our intelligence every day.  Zuckerberg and Dorsey claim they are not biased against conservatives and Christians, even as they ban more and more content on a daily basis.  They really do think you are stupid, which proves they are stupid.

Nancy Pelosi pulls the dumbest stunt yet, to get the House to formally condemn Trump’s Tweet as racist.  Not one Republican had better vote for this—not one.  It is a trap.

If there is one truth today it is this: You never apologize to the Left. Apologies open the door for them to lie and use it against you later. Trump learned this early on.

It is a stunt born out of Nancy Pelosi’s panic and desperation.  And, speaking as a Spirit-filled believer—it is demonic.

House Minority Leader Kevin McCarthy, (R-Calif.), said in a news conference Tuesday morning that he did not believe Trump’s Tweets were racist.  I quote him: “I believe this is about ideology; this is about socialism versus freedom.”  McCarthy added that it was at a news conference on Monday, as the congresswomen responded to the President, that they “talked more about impeachment than anything else.”

He went on to say, “This is more from their base, it’s about politics, and it’s unfortunate.  We should get back to the business of America.” Amen, brother!

32 thoughts on “NOT RACIST”