By attacking ‘the Squad of Four,’ Trump has forced Pelosi to defend them. By defending them, Nancy fell into Trump’s trap. His goal was to make the Squad the face of the Democrat Party, and it worked!

Trump is not wasting any time attacking Biden or any other potential Democrat candidate for President. He knows—with wisdom from beyond this world—that he has found the key to his reelection.

Remember when Nancy said these words about the Squad? “All these people have their public whatever and their Twitter world. But they didn’t have any following. They’re four people and that’s how many [congressional] votes they got.” She said it because she knows how much they will damage her party’s chances in 2020.

Then in a chess move worthy of a grand master, Trump lobs his grenade-Tweet. It wasn’t racist, and everyone except those who hate Trump knows that. Nancy had no choice but to stand up for her radical colleagues or incur the wrath of the majority progressive wing of her party.

Independent voters are horrified by this deranged ‘Gang of Four.’ Americans understand how our system works. They know the difference between dissent and hatred.  Disagreeing with government is patriotic. Hating it, and wanting it destroyed, is something totally different.

Nancy’s panic is not over these beliefs—she and her wacko friends in the San Francisco Bay Area agree with almost all of this. Give me a break—the Berkeley City Council just voted to stop referring to manholes as manholes because of the word ‘man’!

No, Nancy is panicking because the ‘Gang of Four’ are coming out and saying what their agenda really is, in plain words. This has forced Democrats to come clean.

The platform of the Democrat Party is based on the lie that America was founded upon and embedded with racism, sexism, and white supremacy, and they believe only a revolution can deliver national salvation. That means the end of America as we know it.  Ocasio and company are openly saying all of this.   The Squad has forced the Democrat Party to come clean and admit they agree.  Revolution, violent if necessary, is their true intention—this will horrify Americans. 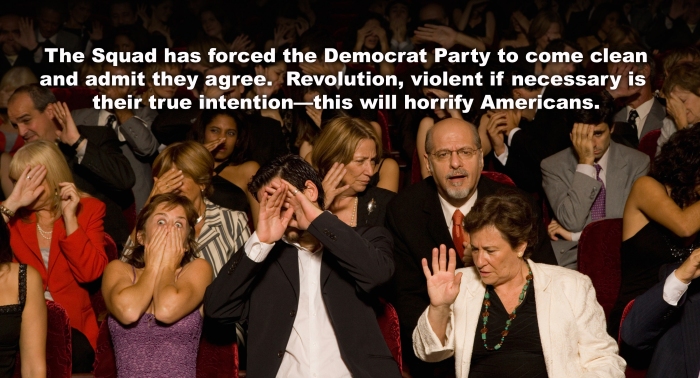 This reminds me of a preacher I knew who was teaching a certain heresy, but he did it with subtly and wordsmithing. His young disciples, however, lacking his way with words, just bluntly stated the doctrine. The heretic was exposed by his young adherents.  The same has happened to the Democrat Party.  They now own the radical and hateful rants of the Squad, because it is essentially what they believe…they just didn’t want America to find out this way.

Here’s the genius of Trump’s move: If Nancy sticks with her gang of four she loses the independent vote. If she exiles them she will split the party. Either way Trump wins.

These four women are blatantly radical and unapologetically hate America. They don’t even mask their malice like savvy leftists should.  Is their hateful meltdown a result of  intercessors and the godly core praying and standing in the gap for America? Sometimes Gods’ gifts come in strange packages. 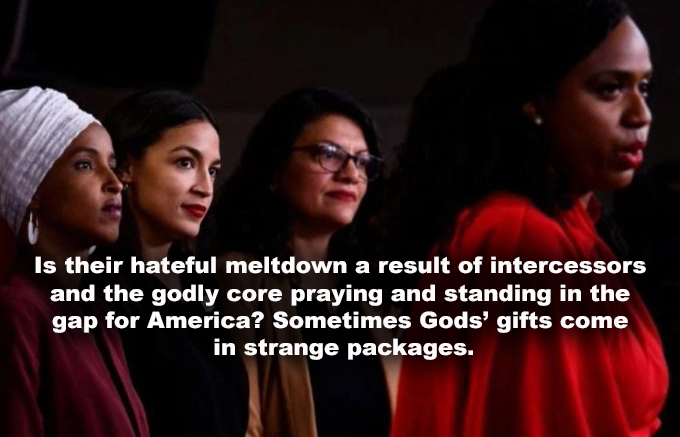 Trump is going to drive the point home that this election is about saving America from leftist, socialist, anti-Semitic radicals, who are bent on killing prosperity, freedom, and Christianity.  He is going to ride that white horse all the way until November of 2020.

If we as Christians will all vote and use the time wisely, we will have four more years in which to evangelize America. The alternative is beyond unthinkable…