1. The Left will finally be blamed for the misery they have created. Trump’s Tweet ripped the mask off of the masters of misery who have taken billions of tax dollars and squandered them through corruption. Every major city in America that is controlled by Democrats is a run-down smoldering wreckage of human tragedy. There is so much violence and addiction that the people imprisoned in cities like Baltimore could justify seeking asylum in the United States.

No longer can the architects of identity politics hide behind false charges of racism. The victims in the inner city now know it is not white privilege that has been keeping them down. They are finding out that the money was sent, but it never got to them, because of Democrat politicians presiding over them like slum lords.

And the leftist misery is not merely limited to the inner city. Never have this many high school and college students been this drug addicted or suicidal. Their death spiral is directly tied to the values instilled in them by activist educators and administrators who cajoled them into experimenting with drugs, gender fluidity, and atheism.

The result was not an enlightened generation as promised, but an entire generation of catatonic, burned out empty shells. Where youthful hope and aspirations should have lived, their teachers injected only darkness and cynicism. Where confidence should have blossomed, instead liberal indoctrination brought crippling fear that drove them to embrace socialism.

When I stand in the tent and call our young people to give their lives to Jesus, I don’t have to spend time convincing them of their need for God. The Leftists have done the damage that now drives them to Christ.  Many other preachers are seeing the same thing.

2. A massive number of believers will force denominations and mega-churches to quit playing games and start winning souls. Thousands tell me they feel insulted by the diluted feel-good sermons that are lathered on them every Sunday. These believers are also sick of carnal Christians who delight in all this fast-food-faith and superficiality.

Watch out! There is a growing core of believers who have separated themselves from the world and are determined to only know Jesus. They are discovering the power and joy of God’s grace in a dark time. They will force desperately needed changes in church life.

3. Revivals come in dark and evil times, not in good times. Hurricanes are caused by nature filling a vacuum. The Left doesn’t realize it yet, but they have created a generational vacuum. They starved our youth of the presence of God, and by doing so, they did not destroy the need for God—they made the hunger more acute.

The rampant hate for God you see among the young people in America can be misleading.  This can bring great hope to those of you who have children who are running from God. Just be aware that after you start declaring a miracle over them, they often get worse, but don’t be fooled:  remember Saul of Tarsus’ condition just before his violent conversion.  By faith, paint a mental portrait of your child serving God.  Hold it in your spirit and trust in the inevitable, supernatural intervention of God!

The greatest promise for that is found in Joel 2:28 “And it shall come to pass afterward that I will pour out My Spirit on all flesh; your sons and your daughters shall prophesy…”  Not only does that apply to a worldwide harvest of souls, but I am convinced it is our children who will be reaping the harvest! 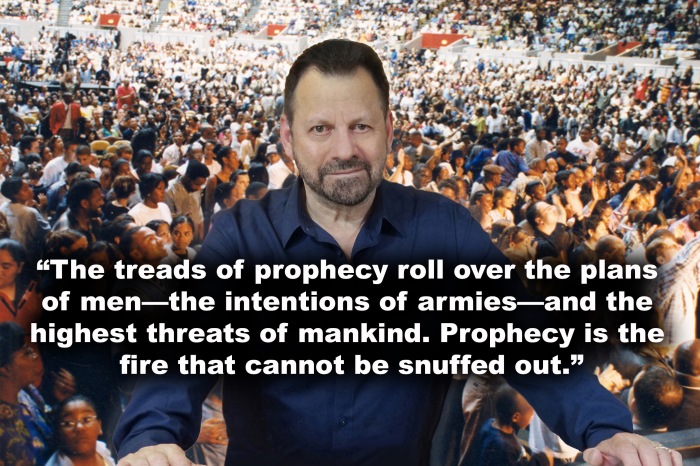 4. Prophecy will Trump Policy. Pun intended. Donald Trump is an example of what I am saying.  Policy said he wouldn’t win. Prophecy said he would. Every generation is guided by two forces: Policy and Prophecy. Policy is the law and the edicts of man. Prophecy always swallows policy.   Christmas is a vivid example.  No doubt Caesar Augustus felt sovereign over the earth when he ordered the world to be registered.  His policy seemed to force Mary and Joseph to Bethlehem.  But policy was simply serving prophecy…namely, “But you, Bethlehem Ephrathah, though you are little among the thousands of Judah, yet out of you shall come forth to Me the One Who is to be Ruler in Israel, Whose goings forth are from of old, from everlasting.” (Micah 5:2)

True prophecy is a bulldozer that overrules the plans of Satan and man.  Prophecy is the WORD that will prevail when all the dust settles and the smoke clears.  The mad ravings of society will bow down before the purposes of God.

The bulldozer of prophecy is not moved by the mad railings of potentates and tyrants.  It is impervious to weather, economic downturns, and persecution.  The treads of prophecy roll over the plans of men and the intentions of armies—as well as the highest threats of mankind. Prophecy is the fire that cannot be snuffed out.   Isaiah 40: 8 declares, “The grass withers and the flowers fade, but the word of our God stands forever.”

5. One of the most powerful forces in the church is Grandma. Satan fears her because she prays like no one else. She’ll keep praying and bombard heaven when even the most avid intercessor has tossed in the towel. Grandma shakes hell. Nothing can come between her and her grand-babies.  The devil may think he has an unbreakable hold on a young person, but no devil in hell, no drug on earth, no seductress, cult leader or gangster is safe from her praying.  Chains break when grandma gets to work. And there are millions of them across America praying right now.

In conclusion, I have never been so thrilled to leave the danger of the Christian preaching circuit and to find my way to the safety of the ghetto.  You and I are getting in position to receive the great American harvest. It is beginning in California and burning its way east! Glory to God!