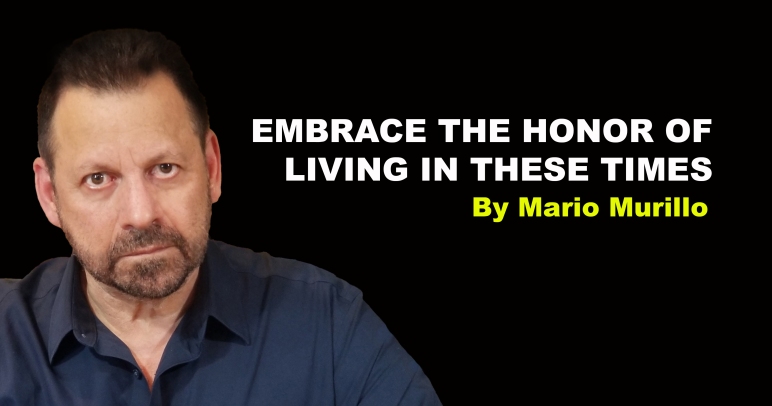 What I am about to I tell you may be hard to believe.  Especially in these times that are dark, evil, angry and dangerous. There is no question that they are the most challenging days ever: in which to be married, have children, own a business, or lead a ministry.

Paul waged war for the Lord in the perilous times in which he lived, and he told Timothy to “fight the good fight.” A warrior shines best in the hottest battle. We must put on the armor of God, and learn to use the sword of the spirit.

Why should you learn to fight? Until you face the fact that you are locked in mortal combat, you will never stop being confused and you will never take adequate measures to arm yourself. Some even coddle the notion that if they remain a commonplace Christian, Satan will not attack them. But the warrior understands that it is the unarmed who are taken out first.

Rejoice in the honor of being born in these times!

First, it is an honor because of what you get to see God do.   These are times when you will witness the power of God working miracles and doing special things through special people.  He gives grace that is not available in other, less chaotic times.  It is in times of crisis that He grants extraordinary power, wisdom, and courage. A life of knowing God and serving God is available to you—a life that was not available to prior generations.  Daniel wrote about dangerous times: “…but the people who know their God shall be strong and carry out great exploits.” [Daniel 11:32b]

It is in the darkest times that the greatest glory rises.  Isaiah 60:1: “And the glory of the Lord is risen upon you. 2 For behold, the darkness shall cover the earth, and deep darkness the people; but the Lord will arise over you and His glory will be seen upon you. 3 The Nations shall come to your light, and kings to the brightness of your rising.”

It is God’s grand finale. It is the time when He will at last reveal the mystery of His work in the world, and He will release all the provisions He has been storing up.

Then there is the matchless honor of suffering shame for Christ.   Acts 5:41 says, “So they departed from the presence of the council, rejoicing that they were counted worthy to suffer shame for His name.”

Jesus said in Luke 6:22: “Blessed are you when men hate you, and when they excommunicate you, and revile you, and cast out your name as evil, for the sake of the Son of Man. 23 Rejoice in that day and leap for joy! Indeed, your reward is great in heaven, for their fathers did the same things to the prophets.”

You were born for this time.  It is not punishment, it is not an accident, and it is an honor—because there is a glorious plan!  There is a holy design, and God in His perfect timing has placed you here on earth right now. We might yearn for simpler times, but the rewards are much greater in this time in which we are living.

But there are consequences for not participating…

Let me take you back to another dangerous time, and urge you to embrace this, your hour of destiny.

Moses had sent out twelve men, one from each of the twelve tribes of Israel to do reconnaissance and then report back on the status of the land Jehovah promised to give them. They were at war, but only two of them were eager and ready to enter the land and fight to take it.

Here are the highlights of the story from the book of Numbers:

13:30 Then Caleb quieted the people before Moses, and said, “Let us go up at once and take possession, for we are well able to overcome it.” 31 But the men who had gone up with him said, “We are not able to go up against the people, for they are stronger than we are. 33 There we saw the giants…and we were like grasshoppers in our own sight.”

14:1 So all the congregation lifted up their voices and cried, and the people wept that night. 6 But Joshua and Caleb, tore their clothes; 7 and said: “The land we passed through is an exceedingly good land. 8 Since Jehovah delights in us, He will bring us into this land and give it to us. 9 Only do not rebel against Jehovah, nor fear the people of the land, for they are our bread; their protection has departed from them, and Jehovah is with us. Do not fear them.” 10Then all the congregation said to stone them with stones. 30Caleb quieted the people before Moses, and said, “Let us go up at once and take possession, for we are well able to overcome it.” 36 The men whom Moses sent to spy out the land and brought a bad report of the land 37died by the plague before Jehovah. 38 But Joshua and Caleb remained alive, of the (twelve) men who went to spy out the land.

The great cloud of witnesses who have gone before us and who are, at this very moment watching from the grandstands of heaven, would give almost anything to be in your shoes!  Jesus said, “I tell you that many prophets and kings have desired to see what you see, and have not seen it, and to hear what you hear, and have not heard it.” [Luke 10:24].

Today you can terrify the enemy and glorify God by turning the tables. Instead of withdrawing out of fear and feeling like you are victims for being born in these times, like Joshua and Caleb, fully embrace this moment.

See it as a great opportunity. Embrace your destiny, and thank God for the honor of being born in these times!

Listen to what Pastor John Kilpatrick, who led the Pensacola Revival, said about Mario’s new book:

“As I read the manuscript for Mario Murillo’s new book, Vessels of Fire and Glory, I said to myself, “Finally!” Mario has measured the church and the nation in this season and did not hold anything back. His honesty is like the sun rising inside a dark cave. This release is a paradox—it is sobering and refreshing; it is symptoms and the cure. I believe this revivalist has penned a treatise that should be in the hands of all who lead the work of God.”

13 thoughts on “EMBRACE THE HONOR”