We knew God had chosen Chico for our first tent crusade in 2020. The enemy remembers Chico. It was once the site of a great youth awakening. I know because I was in it! It was an outpouring that produced powerful leaders.

Robert Maddux was born again at that time in a remarkable manner.  Yanked out of darkness, he became a true man of God—a pastor and a powerful influence upon the lives of many leaders.  Gaylord Enns is still leading leaders here in Chico, but carries a message to the nations about the Love of God. He was swept up in the fire of revival in that same visitation. Roger Houtsma met Jesus in an epic way and became a miracle- missionary evangelist who conducted many towering crusades in India. And, it was also in Chico that I was called to preach.

Lonnie Decker is also another hero, a mighty woman of God. After her husband went to be with the Lord, she became the pastor of his little country church. I remember the night that she said she would open her heart, home, and church to the hippies God was saving. And God began saving them in an amazing way. Soon we saw rallies with thousands in attendance.

Another wonderful part of the history of the Lord’s work in Chico happened in the City of Pacifica, just south of San Francisco. I happened to be at the home of Cecil and Lillian Cooper. Cecil was a vice president at Bank of America. During dinner he slid a brochure in front of me. The brochure was for a resort named Richardson Springs.  He said, “I’m buying that resort and I am going to open a Christian conference center. I am calling it Springs of Living Water.”

“The Springs,” as we affectionately called it, became a hub for revival—a home for converted hippies and so many who were converted out of the drug culture.  Many mighty voices ministered there. Dick Mills, a man with a true prophetic gift that many of you may remember, was a powerful force at The Springs at that time.

Soon, the Springs became the home of Donnie Moore’s amazing youth camps, where thousands of young people continue to be revolutionized every summer.  Then The Springs became a Youth With a Mission base, and remains one to this day.

The first tent crusade of 2020 carries the greatest challenge. The reason is simple: it is the most rushed.  There is little you can do during the holiday season. So, when the New Year arrived, we hit the ground running. The training we received last year proved to be of invaluable help for the coming meetings! We learned to ignore what we saw with our natural eyes, and to only go by the Word of God. 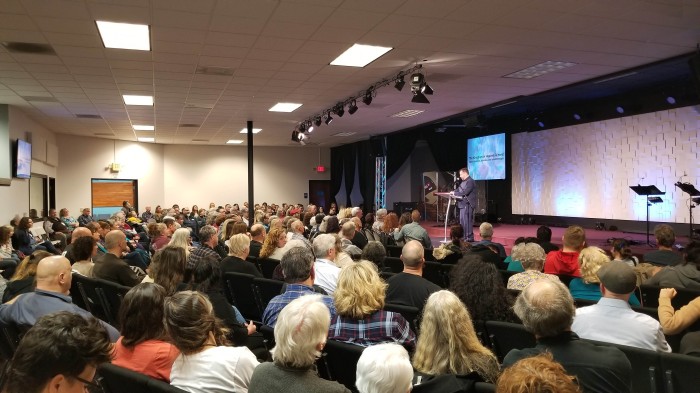 All of the permits we required came in on time. The literature came together beautifully. Workers reported for duty, even when given minimal notice. All the while, we felt the presence of the devil nipping at our heels, trying to get us to stop. But, this year, we have never slowed down. This year, we have ignored even the most daunting threats and have just kept charging forward.

The enemy wanted to bury, and bury deeply, those vast wells of revival that still exist in Chico. The success of this tent crusade has hinged on successfully implementing a new weapon God had given us: it is called the Night of Miracles.

In Fresno, Dinuba, and Hanford, it was the Nights of Miracles that set the stage for the breakthrough. These Nights are a kind of D-Day for us—because they are the initial beach landing.

But in Chico, we found ourselves at a loss to know where to hold our Night of Miracles. Suddenly, the phone rang and we received a call from Josh Jameson who assists Steve Grandy at Jubilee Church in Chico. They wanted to do what they called a Word Explosion in January. We immediately realized that we were to team up to do an event that would bless Jubilee and at the same time give us the breakthrough we needed in Chico.

Of course, the devil came with all his usual lies. He said no one would show up. He said the religious spirit over the city would smother any fire that might come. I got so excited by every lie he told. Because I knew the opposite must be true. And was it ever!

That Sunday night, the church was full early, and the faith level was sky high. The same thing happened on Monday night.  There were clear miracles of healing, yet something even more important happened. It is so important because it exposed a fallacy about Chico, and for all of California, for that matter.

SOULS WERE SAVED AND SOULS WANTED TO BE SAVED.  Those of us in the church always wish that the unsaved would want Christ, but we have been conditioned to believe they are closed to the Gospel. The Devil dreads the idea of souls being saved, and the secular-progressives laugh at the idea of youth turning to Jesus. All of that went up in smoke at Jubilee in Chico!

Now, I want to bring the most exciting news of all…and I need your help. On Tuesday, February 11th at noon, I am going bring a special message to pastors and leaders, and you will never guess where. Talk about full circle…the free luncheon is at the Springs! The Youth with a Mission base at Springs of Living Water will be the location for this historic lunch.

You already know the Tent goes up in Chico at the Silver Dollar Fairgrounds March 15th through the 18th, but first, we will gather the leaders for a special time in the Word and Power of God. This luncheon is free, but you must register. Call us at (775)-238-3473.

Please remember to hold us up in prayer. I look forward to seeing you there! 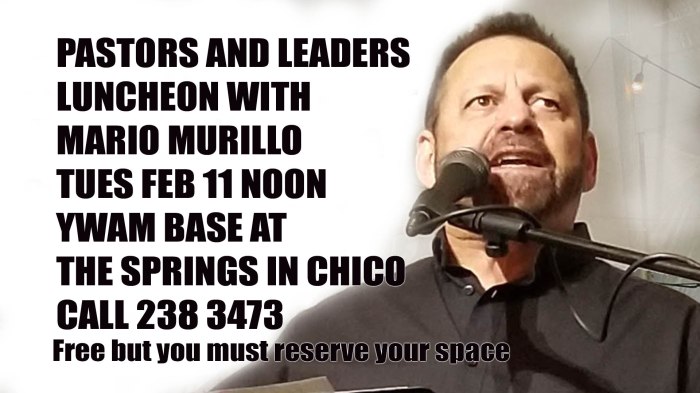 13 thoughts on “Victory Report from California”