Imagine with me: It is five years from now.  Your church is still seating people six feet apart. The State is still doing spot inspections of your sanctuary and bathrooms, and they can shut down services any time they wish to.

This is why we cannot let ourselves be classified as an ‘essential service.’ I believe that to do that would be to make a deal with the devil. No, I am not nitpicking. The church made this same horrible mistake 65 years ago when the Johnson Amendment made Christian organizations 501c3 corporations.

Pastor A.J. Nunes, one of our team leaders, brought this threat to my attention.

Walmart and Costco are examples of ‘essential services.’ They operate under the direct regulation of the Health Department and any other agency of State and Local government that wants a shot at them.

We must fight for religious freedom—not to be an ‘essential service’, as if we are a retail business. We want State governments to respect the church more than they respect box stores—a lot more.

How do we differ from stores under the Constitution? That is the question! The First Amendment places churches in a higher category of protection than stores. Religion is singled out as a protected entity.

Our goal is to ban Blue States from violating our rights by using the virus as an excuse for writing laws that gratuitously hinder our free exercise of religion.

If Blue States can get us to agree with them that we are no better than retail businesses, they’ll do an end-run around the First Amendment.

Lyndon Johnson pulled a dirty trick like that on the church 65 years ago. A host of pastors opposed his reelection to Congress. His opportunity to shut them up came when fellow Congressmen begged for his vote that would allow them to pass a bill. He agreed to vote their way if they added his amendment that made it illegal for pastors to talk about politics.

It’s like when Nancy Pelosi refused to vote for the small business relief bill unless it included money for the arts. During a pandemic, she’s thinking about art!

Today, the National Council of Nonprofits uses the following insidious language to say why Christians want to get rid of this violation of free speech. “Although couched as attempts to promote religious freedom and free speech, the legislative proposals would have the effect of politicizing and thereby erasing the public’s high trust in charities, houses of worship, and foundations to benefit politicians and paid political consultants. In addition to legislative action, politicians encourage charitable organizations to endorse candidates, essentially encouraging them to violate the law.”

First, they say our quest is not really for freedom of speech: “Couched in attempts to promote freedom speech.” They are saying our fight to speak freely is not about freedom of speech? How sick is that? Next, they say we’ll lose money by losing high trust. Finally, they make a veiled threat, saying that we are breaking the law by exercising our constitutional right.

The Johnson Amendment is the poster child of the Democratic Party. It has never applied to anyone except conservative churches. Liberal and black churches have always been free to endorse candidates. 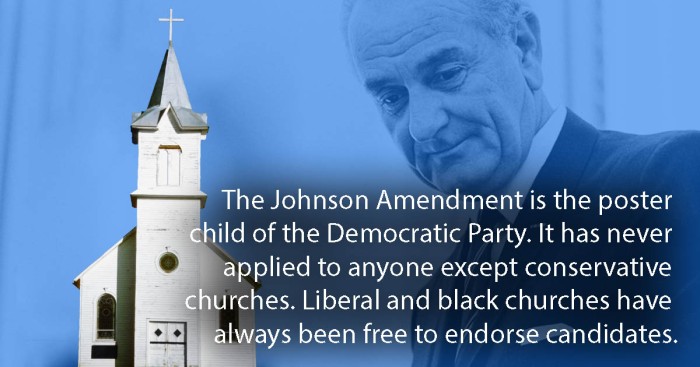 During Obama’s reelection campaign, Michelle Obama stood in the pulpit of a black Baptist church and told them, “It is your duty to Christ to vote for Barack Obama.” But the National Council of Nonprofits did nothing about that.

Trump overruled this vile law by executive order. It’s shocking how many pastors still don’t believe they are free to say anything political that they wish.

We lost that battle 65 years ago because of fear. We need to shake fear now and enforce the truth. We are a Constitutionally Protected Body. That is what we are fighting for!

California, we give you notice that we don’t want to trade our rights for a lower grade of freedom than is already promised to churches by the Constitution. We want you to take your hands off of us, because the law of the land guarantees it. We are not looking to Sacramento for permission to exist.

If any Blue State attempts to use this trick in order to illegally regulate us, either during or after the pandemic, we must be prepared and fully resolved to fight with all of our might—for the sake of lost souls, our nation, our congregations, and our families.

We will obey rational laws regarding health and safety. We will meet when God wants us to meet. We will fill our churches when God wants them filled. And we will sing and preach what God wants to hear. Those who spilled their blood during the American Revolution did so in order that a timeless document might be written—the greatest document of freedom the world has ever seen, outside of the Bible. Our Constitution guarantees us the right to say what Peter said to those who wanted to limit the church during his lifetime, “Whether it is right in the sight of God to listen to you more than to God, you judge. For we cannot but speak the things which we have seen and heard” (Acts 4:19b-20).