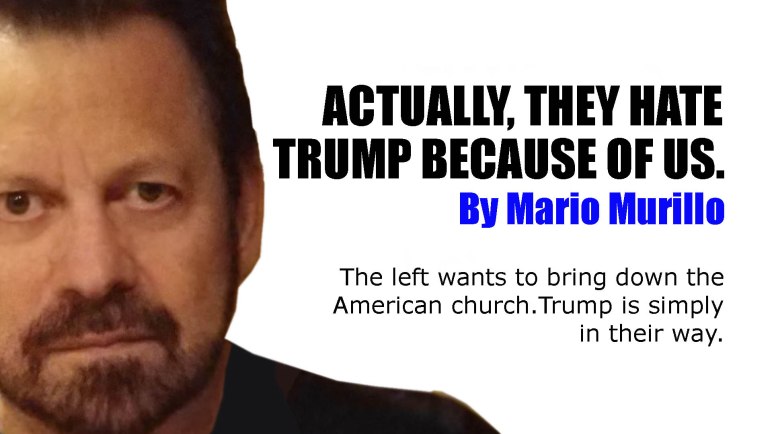 Many Christians think people hate us because we support Trump. The fact is, they hate Trump because he supports Christians. American Christians chafe at the notion that they are hated by the left. The truth is if Trump went away they would still hate us. They are after us and Trump is in their way. That is what all the rage toward him is about.

More than ‘Trump Derangement Syndrome,’ what we have is ‘Christianity Derangement Syndrome,’ giving new meaning to the scripture, “My people are destroyed for lack of knowledge” (Hosea 4:6). The lack of knowledge that is destroying our freedom is our ingratitude and lack of discernment of both what Trump suffers on our behalf and the firewall of protection he is providing the church.

The Democrats hated Christians long before Trump came along. Years ago, they were trying to get every preacher off the air. They made it their mission to ban prayer in public events, and even Friday night football. They are the ones who wanted the Ten Commandments taken down in every public park and building. They are the ones who banished Nativity displays at Christmas time.

They hate our stand on marriage and abortion. They hate our beliefs. They make no pretense about it. There is zero outreach to Christians by Democrats. They are not even trying to get our vote, and gave up trying years ago.

They have been tireless in their crusade to banish the influence of Christ on America. Long before Trump announced he would run for President, Obama was verbally belittling the Church. Then he openly went after ministries and Christian businesses that would not support abortion. In the last few months of his first term, he suspended Billy Graham’s nonprofit status. He weaponized the IRS to block conservative and Christian groups from getting non-profit status. All of this was before Trump.

The caption below is no joke. It’s the absolute truth.

Democrats have graduated to much darker tactics. They want preachers in jail. In Chicago they have threatened to bulldoze churches to the ground. In L.A., the mayor wants to cut off their water and power.  They are apologetically  trying to bully the Church, to silence us, and to shame Christianity. They are against every aspect of Christian influence in America. There is only one thing stopping them…can you guess what that is?

The Democrat Party has been been seized by atheism, and have even included it in their platform. If you can stomach watching their convention you can see that Democrat party leadership is now openly run by Trump hating Marxist/Socialists. That says it all.

The firestorm against Trump began in earnest when he took a stand for the Church. We are not doing him a favor by supporting him—we are doing ourselves a favor. We are not martyrs for Trump so much as he is a martyr for standing with us—specifically on abortion and freedom of Religion.

There is a website—which claims to be Christian—yet espouses the idiotic notion that Trump is using Christians. They are actively trying to get Christians not to vote for Trump. This is the proverbial case of ‘cutting off your nose to spite your face.’

My first question is this: In what sense is the Church being used by Trump? He had a great life before he ran for President. Why would he even want the job? There has been nothing but cheap shots and mindless hatred being thrown at him from day one. This hare-brained website is saying that Trump has derived some kind of huge benefit from Christians. Yet, 30 million of us didn’t even vote in the last election!

To listen to these ‘woke Christians,’ you’d suppose the American Church was some vast arsenal of unified power that has placed itself at Trump’s disposal. Even if Trump were searching for a reliable source of help, I am sorry, but the American Church is not it. We don’t get along with each other, let alone with him.

No, the Church did not rise to the occasion in 2016 and elect Trump. Millions were just sick of the destruction that had been wreaked on America for eight years by Obama, and the thought of Hillary was too awful to bear. But, to be fair, a percentage of them were Christians.

But, to see the Church as a tool that is being used for Trump’s ambition is ridiculous. We are not suffering in order to make him President. He is suffering and being used of God, to keep us free.

All of us who call ourselves Christians must vote for him. And, we are not doing that for him, we are doing it for ourselves, for America, and for our children’s future.

As you know, the lockdown stopped our tent crusades.  Prayerfully, Mario decided he would stop raising outreach money, but still keep his outreach team on full salary. That is when the idea for the War Chest Collection was born. It has been a huge win-win situation.Take our 3 bestselling books, make them a collection and offer them for just $27.

Now, all the proceeds from the War chest will go to the tent crusade in Fresno.

20 thoughts on “ACTUALLY, THEY HATE TRUMP BECAUSE OF US.”