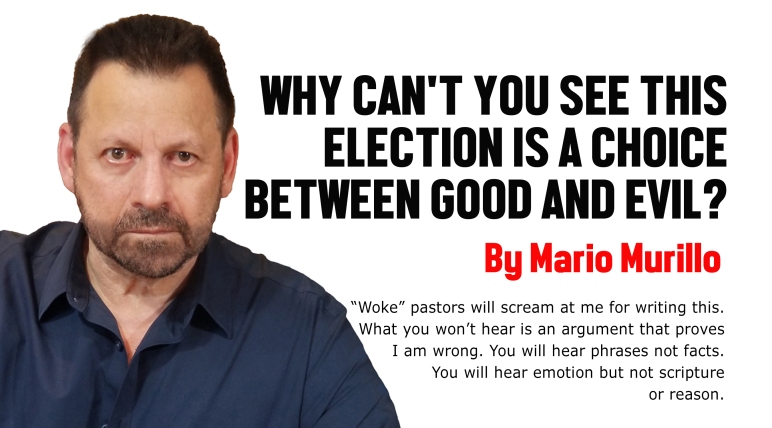 What we now know to be settled fact would sound like a conspiracy theory to prior generations of Americans. The idea that the news media would march lockstep with one political party and leftist billionaires to control what we see, hear, and what we are allowed to think.

Then right after that, Virginia passed a law that would fine Christian Schools $100,000 every time they opposed LGBTQ teachings or refused to pay for sex-change operations through taxes. This a blatant attack on the First Amendment rights of Christians.

All of these evils have one thing in common: The Democrat Party.

I cannot understand why any Christian can’t figure out that this election is about choosing between good and evil. How can anyone sincerely pray, “Lead us not into temptation, but deliver us from evil,” and then vote Democrat?

Lukewarm Christian leaders will scream at me for writing this. But you will not hear an argument that proves I am wrong. You will hear trite phrases, but no facts to back up their reasoning.

Did you miss the most notable development of the entire “debate?” Joe Biden said, “I am the Democratic Party.” That destroys any excuse you have. That statement removes any possibility of any follower of Christ voting Democrat.

He is saying, “I am the leader of the party that is doing all of these things.” If you vote for him, you are aiding and abetting the entire panoply of wickedness they have committed in the past, and the greater evil they are about to commit after the election.

And do not think that sitting this one out will exonerate you. If you could have helped to stop Biden and didn’t, to you, it is evil.  Detrick Bonhoeffer said, “Silence in the face of evil is itself evil. God will not hold us guiltless. Not to speak is to speak. Not to act is to act.”  This election is about choosing good or evil. Which will you choose?