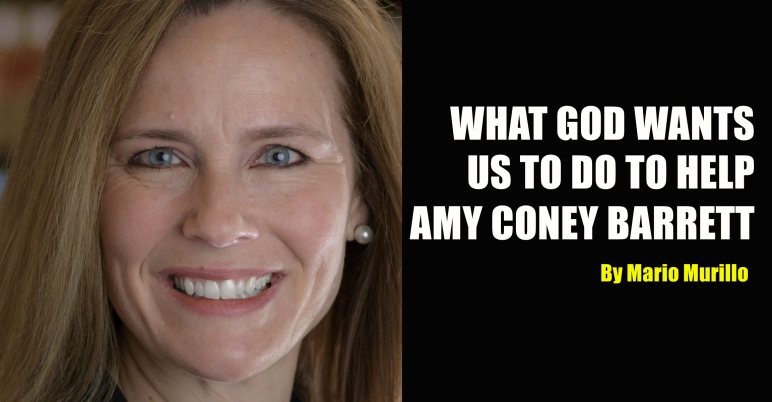 “Behold, I send you out as sheep in the midst of wolves. Therefore, be wise as serpents and harmless as doves” (Matthew 10:16). If ever that verse applied to anyone, it applies to Amy Coney Barrett. To say that we must cover her in prayer is the quintessential understatement.

Amy is being sent into a fiery trial—a crucible of intense scrutiny and verbal assault that few people have ever experienced. We are about to witness the full fury of the Left, empowered by Satan himself, and it will be gruesome.

Democrats save their worst vitriol for nominees to the Supreme Court who are conservative. Their brutality in these instances is legendary. But in this case, they have more to lose than ever before. Sending Barrett to the Supreme Court will remake the structure of the court for decades. But the most important thing on the mind of every leftist is Roe v. Wade.

The Left is convinced that Amy Coney Barrett represents the end of legalized abortion in America. That possibility has the hordes of hell convulsing—and the caldrons of Jezebel overflowing with molten rage. Satan will fight to prevent the end of human sacrifice in America.

Brace yourself. Reason, sanity, and decency are about to fly out the window. You will witness Democrats taking full leave of their senses. The words will be louder and viler than any we have ever witnessed.

Look for terrible cruelty. There will be attacks on her marriage. Her children. Her privacy. Clarence Thomas saw their fury—Brett Kavanaugh felt their wrath—but Amy will be treated to the worst of the worst.

The fake news media will form an armada of slime and slander, and will open a gusher of lies. This will be an Armageddon of disinformation—the nuclear winter of journalism. You have never seen anything like what they will do to this special and honorable woman. And it all begins as of this morning.

Just how crazy are Democrats, anyway? They are unhinged enough to disregard how ugly, hateful, and irrational they look to Americans. They will not even take into account that their insanity might cost them the election.

They already know Republicans have the votes to confirm Barrett. So, their only hope is a campaign of terror so frightening that Amy will withdraw from the nomination process.

Perhaps the best way to understand Amy’s circumstances is to look at Esther in the Bible. Beauty, intelligence and holiness offers itself to the furnace of affliction—she places her life in the very jaws of evil.

Esther 4:13-14, “And Mordecai told them to answer Esther: “Do not think in your heart that you will escape in the king’s palace any more than all the other Jews. For if you remain completely silent at this time, relief and deliverance will arise for the Jews from another place, but you and your father’s house will perish. Yet who knows whether you have come to the kingdom for such a time as this?”

We are, perhaps, overly familiar with those verses calling Esther to her duty. What we overlook are Esther’s words of inestimable courage:

Verse15-16, “Then Esther told them to reply to Mordecai: “Go, gather all the Jews who are present in Shushan, and fast for me; neither eat nor drink for three days, night or day. My maids and I will fast likewise. And so, I will go to the king, which is against the law; and if I perish, I perish!”

Amy Coney Barrett’s decision to enter the Democrat/media/leftist lion’s den is every bit as heart-grindingly courageous as Esther’s decision to face the king. In both instances, it is about ending genocide.

We, our children and our grandchildren, are the beneficiaries of Judge Barrett’s courage. Like Esther, God asked Amy to offer her life for such a time as this. Thank God she said, “Yes.”

Once again, American Christians are faced with a supernatural act of mercy. To me, this one is equal to the election of Donald Trump. And once again, we can make the same mistake of ingratitude toward God that we made with Trump. The passing of Ruth Bader Ginsburg on the beginning of Rosh Hashanah has prophetic implications.

Once again, we can miss the meaning of this moment. This is a moment of prayer and intercession for a chosen one who needs our prayers. She needs the full arsenal of prayer from the Body of Christ.

Is it a coincidence that she was nominated on the National Day of Prayer? Is it an accident that this occurred as tens of thousands of Christians were in Washington D.C. to repent and march for Christ?

As I said, the hurricane of slander begins today. And what will she do then? Amy can’t say it, but her cry is clear to me. She is asking for the same firewall that Esther asked for—fasting and prayer. And yes, Amy, we, the American church, will fast and pray!