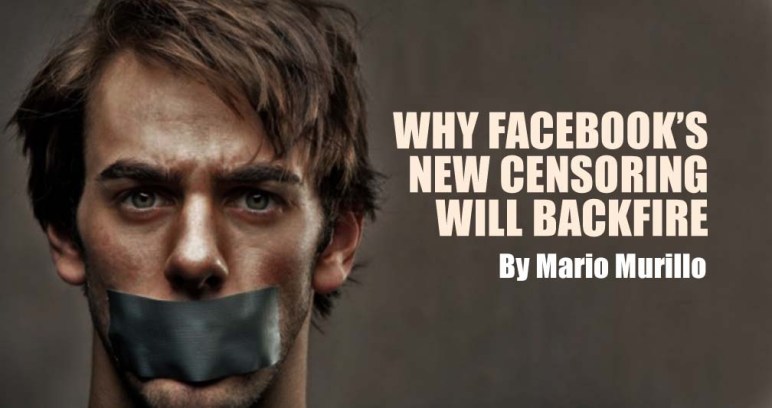 Special alert! Every single blog I write is now being censored in one way or another. This latest one about extending the crusade in Fresno–as innocent as that seems –is something they felt the need to ban.

However, Facebook’s new censorship will backfire. Facebook has published a lengthy disclosure of their new policies that are set to kick in on October 1st. They claim that these new policies are necessary to protect themselves from lawsuits. That’s rich. Facebook worrying about lawsuits is like a hippo worrying about flea bites.

They also claim that they are concerned about civil unrest arising from malicious posts. Such concern is of course selective. It took forever for them to remove leftist propaganda that called for violence. If you think that their concern about unrest will extend to removing Black Lives Matter propaganda—well, as they say in Texas, “Bless your little heart…”

When Mark Zuckerberg appeared before Congress to answer questions about Facebook censorship, he was adamant that they were fair. But when a Congressman asked him why Facebook had censored black conservatives for no good reason, he was, in the words of one reporter, “flummoxed”— a great word meaning bewildered and perplexed.

What does Facebook fear? They fear Donald Trump. Specifically, they fear his reelection. They fear his power to disrupt their company with the only organization big enough to threaten them: the U.S. government. They fear Trump’s reelection will lead to an investigation into social media’s long standing and draconian bias against Christians and conservatives.

So, here’s how leftist logic works: “in order to avoid prosecution for something I am doing, I will do more of it.”

The reason Facebook is ratcheting up its censorship, is that Trump is winning. Trump campaign ads are devastatingly effective—perhaps the most effective political ads in our history. Trump’s ads are actually changing minds. They know that Biden’s ads by comparison are a joke. They think that doing a pseudo-censorship of them is no big loss.  But Trump—and Christians and conservatives, by extension—must be stopped.

The most irritating thing about the Facebook politburo is how they insult our intelligence. Do they really believe they are fooling anyone? Facebook, you are left wing. You hate Trump. You want Biden to win. You are the only ones who think your bias doesn’t show.

Facebook says they will ban hate speech. That’s code for, “It’s not that you said anything hateful, it’s that we hate what you believe.”

Facebook and other social platforms enjoy an immunity from lawsuits because they are an information platform. When they drift into editorializing, they are more vulnerable to government intrusion. They are not inventing these new policies to avoid lawsuits—they are doing it to create an additional firewall to protect and enhance their bias.  All they are doing is sprucing up their camouflage.

But this is going to backfire, and backfire big time. If history has taught us anything it is this: God will have His witness. When God wants the world to know something—nothing can stop Him or His message.

Sometimes, God even permits a great centralizing of power in order to exploit it for His Glory. Nebuchadnezzar centralized power over the known world. However, God sovereignly inserted a teenager named Daniel into the very halls of power in Babylon.

God gave Nebuchadnezzar a nightmare. No one could help the king. He was so terrified by his dream that he created this new rule for his magicians: “If you do not make known the dream to me, there is only one decree for you! For you have agreed to speak lying and corrupt words before me until the time has changed. Therefore, tell me the dream, and I shall know that you can give me its interpretation” (Daniel 2:9). The king needed a real answer, not Oprah opinions.

Daniel was censored by the greatest potentate on Earth, but because he knew the King’s dream, Daniel rose to prophetic authority—even over the king.  God can flip the script of the most powerful agendas of man.

God creates the crisis that forces truth back to the top. That is what I believe will happen in America. Truth will rise again—even over Facebook, YouTube, Twitter and Google. “Surely, the wrath of man shall praise You and You shall bind the last bit of Your wrath around You like a belt” (Psalm 76:10).

What crisis will God create to make this censorship backfire on Facebook? Only God knows. But I rejoice that God is going to do it. Wait and see.

Daniel prayed for mercy because, he too, was on the death-list if he could not tell the king the dream. Then God showed Daniel the king’s dream. Daniel rejoiced, and in his psalm of praise to God he said something glorious for you and me, but chilling for Mr. Zuckerberg—a reminder that no one who censors God is safe.  “And He changes the times and the seasons; He removes kings and raises up kings…” (Daniel 2:21).

We are live streaming this historic outreach this Sunday at 6:30 PM PST use the link below!

35 thoughts on “HERE’S WHY FACEBOOK’S NEW CENSORING WILL BACKFIRE.”