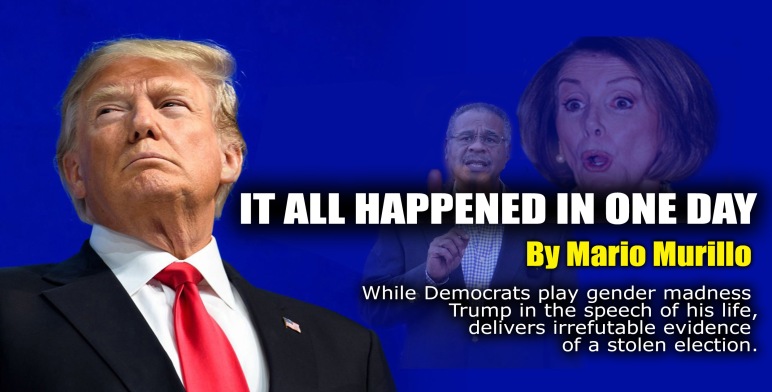 All in one day. As America writhes in agony over the electoral college, Democrats find time to play gender madness. Meanwhile, Donald Trump delivers the irrefutable evidence of a stolen election.

First the gender madness: Democrat leaders, who are no longer male or female—are also no longer animal, vegetable, or mineral. They are mindless entities who have lost the ability to form a rational thought, yet have somehow retained the power of speech. Consider:

House Speaker Nancy Pelosi is attempting to excise all references to either sex in House business to “honor all gender identities” and “promote inclusion and diversity.” On Monday, the House of Representatives is set to vote on a Rules Package for the 117th Congress, which Pelosi and Rules Committee Chairman, James McGovern, promise will be “the most inclusive in history.”

Then, House Democratic Rep. Emanuel Cleaver of Missouri, ended the opening prayer for the 117th Congress Sunday with, “Amen and a-woman,” in an apparent effort to be gender and deity-inclusive, but failed to be PC by not saying, “Amen and a-person.”

The term “amen” is not even a reference to the two sexes, however, as Pennsylvania Republican Congressman Guy Reschenthaler pointed out on Twitter: “The prayer to open the 117th Congress ended with ‘amen and a-women.’ Amen is Latin for “so be it.” It’s not a gendered word. Unfortunately, facts are irrelevant to progressives. Unbelievable.”

Cleaver, an ordained United Methodist pastor who appears clueless about basic biblical knowledge such as the meaning of the word, “amen,” offered the House prayer as Democrats in the lower chamber have prioritized removing references to the two sexes in House business in an effort to “promote inclusion and diversity.”

There’s more: Democrats went apoplectic over a nothing-burger of Trump facetiously asking someone on the phone, ‘Hey, you found imaginary votes for Biden, now find the real ones for me.’ Again, they simply can’t see what tragic buffoons they are to America.

In case you still don’t get it, let me reinforce the truth. Democrats do not live in a world where your family matters. They cannot even muster an iota of self-awareness to see how they look to normal people. Nancy Pelosi doesn’t even believe it. She still uses such soon-to-be-outlawed terms as “mother” and “grandmother.”

Next, the undeniable evidence: In a powerful speech in Georgia last night, Donald Trump was as methodical, deliberate, and effective as any top-flight attorney. He made the case and delivered the speech of his life.

Why do I say that? Because this speech does not just address the urgency of the election in Georgia today. He delivered the numbers in case after case of the transparently criminal rigging of the election.

It was the speech of his life, because it transcended his battle to prove he won the election. He showed us all the heinous crime that is the globalist, China-driven Democrat agenda. He did not say it, but he modeled it: Without his leadership, 2021 is doomed to be the worst year in American history.

Without Trump, 2021 will be the year that the inmates officially start running the asylum. Without Trump, a sleepy man will be run over by a “woke” woman. And yes, I used gender titles. We will not only suffer the worst economic downturn ever―we will see the basest ideas become national policy.

Before you breathe a sigh of relief that a bad year has ended, realize that the worst is yet to come. The reason is that elite billionaires have bought airtime trying to convince us that Biden and Harris really won.

2021 under Biden, would mean America would face her strongest enemies ever, with her weakest leadership ever.

Proverbs 29:2 gives us our options for 2021: “When the righteous are in authority and become great, the people rejoice; but when the wicked man rules, the people groan and sigh.”

Do you want good news? Do you want peace over this situation? Do you want to save America? Then shake off all compromise. Cut yourself loose from the tepid Christians who have no fight in them. Pray for the brave Republican leaders who are doing all they can to stop a fake election from being certified.

Understand the reality of our struggle. God can still do a miracle, but no matter what, the race does not end, even if Biden is permitted to form a puppet government. The battle is not over because we see a Kabuki theater inauguration. The truth will come out, if we refuse to give up.

We must forget the intimidating glare of a toxic media, pompous politicians, and tyrannical big tech. Their frowns should not move us. It is the eyes of our children, grandchildren, and all future Americans that should haunt us.

We must bear the present reproach just a little longer, so justice can prevail. If we can keep pressing toward the finish line of truth and if we do not slow down the Trump Train to throw rocks at the barking dogs, we shall wake up to that golden morning of freedom.   Proverbs 28:28, “When evil-doers are lifted up, men take cover; but when destruction overtakes them, the upright are increased.”

P.S. We do not want to blunt the message you just read. This part is for anyone who wants to help  Mario Murillo’s ministry to America. We are in the process of invading Bakersfield California. The tent crusade starts on Monday night January 11th at 6:30 PM.

We have a win-win offer. You can help support miracle soul winning in Bakersfield and get the following offer:

MARIO MURILLO’S TWO MOST POWERFUL BOOKS TOGETHER. PERFECT READING FOR STRENGTH, POWER, AND DIRECTION IN THESE EXPLOSIVE TIMES. NOT ONLY THAT BUT YOU WILL HELP WIN SOULS IN CALIFORNIA. JANUARY 11-13 WE RETURN TO THE HIGHWAY 99 CORRIDOR OF GLORY: BAKERSFIELD!

That is why we must make this stunning book offer to you. Now in its fourth printing, Vessels of Fire and Glory keeps reaching the top of its category on Amazon.  Critical Mass has now sold over 150,000 copies and remains an international classic on awakening. Both books are still in high demand. So why are we making this amazing offer to you? California is the reason why.

We need to act fast in California for two big reasons. First, Fresno was a shocking breakthrough. Fresno is a sign that tens of thousands of Californians hunger for the Gospel. Second, the battle for America will be won or lost in California.

You get both books for just $20. Not only that—Mario will autograph your copy of Vessels of Fire and Glory. On top of that…you get free shipping.

This is a double win for you. You get these choice books at an excellent price and the proceeds go to win lost souls in California.

And there is still more. If you order 10 or more sets of the Dynamic Duo, your cost is $18 a set.  Plus you will get free 2-3 day priority shipping. Click on link below to order now! 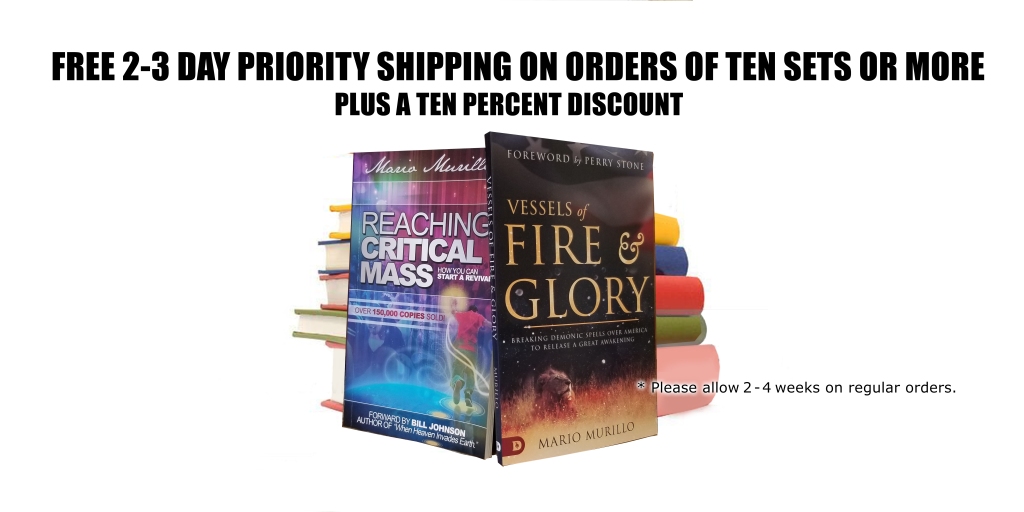