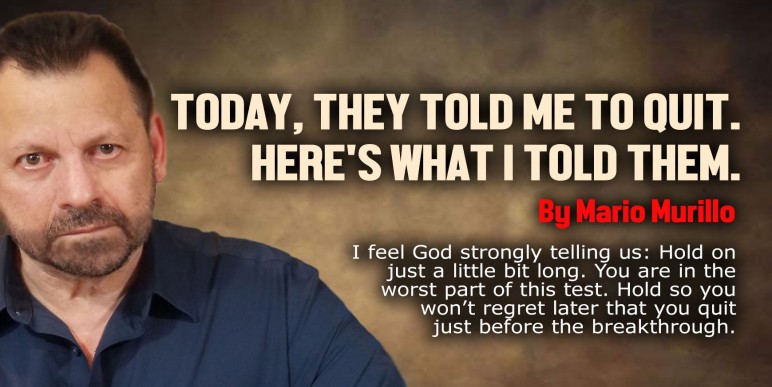 I was told to quit. The person who said this was deeply concerned about my welfare. They made a chilling case for me to go silent while there was still time. They talked about websites with millions of followers that were suddenly wiped out today. They told me that anything I would say would be twisted—and, that not only would I be banned, but they would go after me until they had destroyed my career as a preacher.

I was ready to answer this person, because the Holy Spirit had warned me in advance that they were coming. So now I am going to relate to you what God told me about quitting. God gave me these verses:

Acts 18:9-11, “Now the Lord spoke to Paul in the night by a vision, “Do not be afraid, but speak, and do not keep silent; for I am with you, and no one will attack you to hurt you; for I have many people in this city.” And he (Paul) continued there a year and six months, teaching the word of God among them.”

The fact is that this blog and this ministry can’t be explained in the natural, anyway. Since it was born supernaturally, it will be sustained supernaturally. Not only am I not quitting, I will amplify all the words I receive from the Lord. You can count on that.

God is stands ready to refresh and empower you for a fresh attack on evil.

Isaiah 40 31 But those who wait on the Lord Shall renew their strength;
They shall mount up with wings like eagles, They shall run and not be weary,
They shall walk and not faint.

Now, I want to speak heart to heart with the remnant of God in America: This is a test. And we are in the worst part of that test. The rage of anti-God social media is out of control, because they feel emboldened to do whatever they want. And because they think Trump is done.

They are raining down shame and accusation on anyone who speaks truth. Nevertheless, we must not fear and we must not fold. Those preachers who cave in to fear, and then abandon their message, will pay a heavy price, not only from shame but also from regret―because they gave up just before the breakthrough.

1 Peter 4:17, “For it is the time for judgment to begin with the household of God; and if it begins with us, what will the outcome be for those who do not obey the gospel of God?”

Evil is having its day.

You knew this wasn’t going to be easy. You knew their evil had to have its day. You knew there was no way we could have challenged these devils without unleashing a storm of hatred.

I know that fear can feel irresistible in this storm. I know it is disheartening when you see people you respected—and some of the last people you would have imagined—caving in and recanting their convictions.

Compromising with the enemy can be seductive, but it will end in disaster, and, as I said, you will feel deep remorse if the breakthrough comes right after you quit. Can you imagine having to live with that for the rest of your life?

I feel God is imploring us to hang on a little longer. I know how hard it has been! You have heard stories that promised to uncover the truth and turn the tide. Each time they raised our hopes and, when it didn’t happen, it wounded us.

Hebrews 10:35-39, “Therefore do not cast away your confidence, which has great reward. For you have need of endurance, so that after you have done the will of God, you may receive the promise:

“For yet a little while, and He Who is coming will come and will not tarry. Now the just shall live by faith;
but if anyone draws back, My soul has no pleasure in him.” But we are not of those who draw back to perdition, but of those who believe to the saving of the soul.”