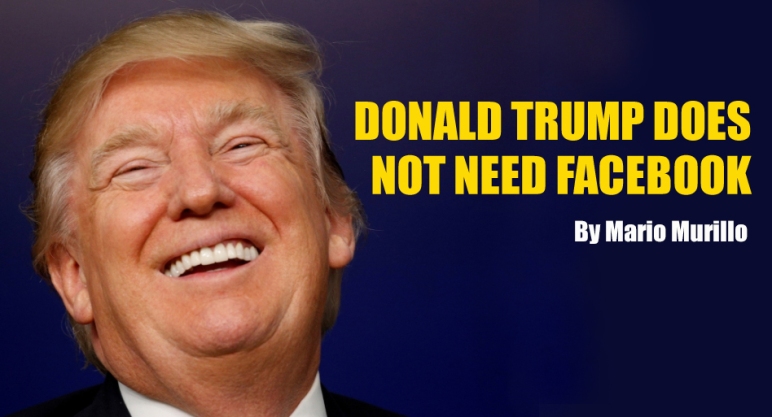 Pride is a strange kind of poison. Under its influence, you are the last to know when your star is fading. I chuckle when I think of the council meeting over at Facebook. They met to decide whether Donald Trump would be allowed back on Facebook.

I am sure the air was charged with arrogance. Never have a group of people so overestimated their importance to the real world. Never, have such small people felt so big.

It’s not like they lacked information about themselves. They banned Trump and, shockingly, he did not die. He did not even miss a beat. His popularity not only remained strong—it grew!

They thought they were lobbing grenades at a tottering shack when, in reality, they were shooting spitballs at a battleship. Instead of going, “boom-boom,” their ammunition made a pathetic “doink-doink.”

Clearly, the brains of the staff over at Facebook work differently than yours or mine. For instance, they can shrink 1.9 billion dollars of damage, rioting, and death perpetrated by Antifa and BLM, which is still ongoing, into acts of justifiable protest. Then, turn around and make the protest on January 6th at the Capitol, which was nothing in comparison, into the most violent act in history.

But their buffoonery does not end there: They believe that Trump incited the riots, even though there is not one scintilla of evidence that he did.

Then they outdid themselves.

They voted to uphold the ban on Donald Trump, claiming it was for your safety. How hilarious is that! They are protecting us! That is like hiring a weasel to guard the chicken coop.

The hand of God is still heavy on Donald Trump. That is why his enemies falter and their schemes backfire. On the other hand—there is an inexorable fate ahead for Facebook and Twitter. They are rapidly approaching the trash heap of history, yet they are the last to realize it.

Trump launched his social platform. Sure, it’s a glorified blog—but what a blog! The numbers of supporters who are currently in contact with Trump through this new outlet are staggering. That means only one thing—his influence in America is growing.

Yet, many Christians are disheartened by the election fraud that took place on Nov. 3rd. They wonder, “What good does Trump’s popularity do if our elections are rigged?” And that is a legitimate question. But here are some even more pertinent questions: How did Trump beat Hillary? Answer: A miracle. How is it that Trump is getting more powerful when everything is seemingly against him? Another miracle.

So how will the stolen election ever be exposed? That may be just one more miracle away. And the most important part about miracles, is that God does not need our help.

The FIREPOWER master class is Free but you must register. Register now. https://warfareandfirepower.eventbrite.com

“I have always yearned to train the remnant on firepower—the power that damages the enemy and moves the army of God to meaningful breakthroughs against sickness, and demonic strongholds. This weekend of classes will skip the fluff. You will find the weapons that tear down strongholds. I am really excited to be teaching all the classes with you.We do not just need an army—we need an army that can defeat the new threats and win a nation back to God.”-Mario Murillo