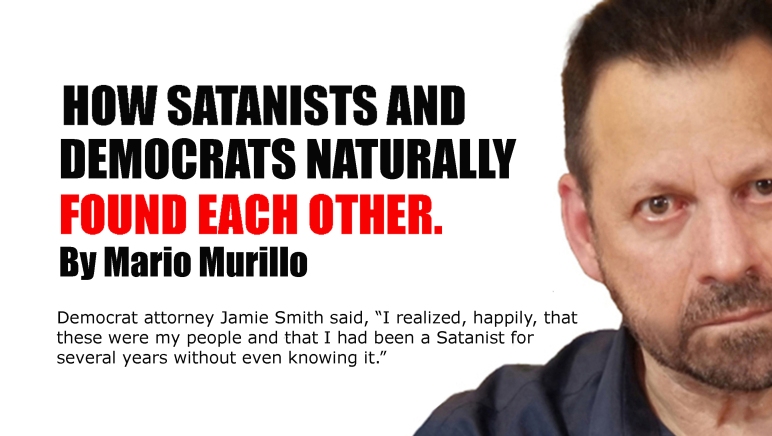 When Hillary announced her run for president the church began fasting and praying. When Trump announced his run, a mass number of witches began casting spells and putting curses on him. That figures.

This is not your grandfather’s Democratic Party. What we have here is a party of death that instinctively understands it is against Christianity. It has gone over to the dark side. The problem is that the American church is in denial about this. And, that denial is blunting our spiritual warfare.

Democrats freely admit they are joining the Temple of Satan. Here’s what leftist attorney Jamie Smith wrote in the Huffington Post: “I am a 40-something attorney and mother who lives in a quiet neighborhood with a yard and a garage full of scooters and soccer balls,” Smith said. “I often walk with my children to get ice cream and spend weekends hiking through a national park. I am not the type of person who would normally consider becoming a Satanist, but these are not normal times.”

Then she explained why she became a Satanist: “When Ginsburg passed,” Smith said she, “didn’t feel sorrow but rather fear that America is headed toward “theocracy or dictatorship. I knew immediately that action was needed on a scale we have not seen before. Our democracy has become so fragile that the loss of one of the last guardians of common sense and decency in government less than two months before a pivotal election has put our civil and reproductive rights in danger like never before. And, so, I have turned to Satanism.”

And what does Satan have to do with common sense and decency?

“We should, however, analyze Smith’s argument seriously, as her claims and their implications paint a troubling picture of the dangerous ideology pervading today’s left,” said Kylee Zempel in her article The Satanic Temple Is In Fact Emblematic Of The Leftist Worldview.

She goes on to say about Jamie Smith, “Smith assured her readers that, not to be confused with the Church of Satan, The Satanic Temple doesn’t actually worship him. Most of the temple’s adherents are atheists, viewing Satan as a symbol of rebellion. According to Smith, members reject the supernatural in favor of reason.

““Like other religions,” Smith went on to say, “members of The Satanic Temple adopt a set of beliefs. In this case, its seven tenets, which include that people “should strive to act with compassion and empathy” and that “one’s body is inviolable, subject to one’s own will alone.”

Here is the catch: even though they claim to be atheists with no belief in the supernatural—you do not need to believe in the supernatural to activate demonic power. All that is needed is rebellion against God—something Democrats are doing wholeheartedly.

Christianity on the other hand requires faith and surrender to the deity of Christ before the power of Christ can operate in us.

“Reading through the seven tenets, I was struck by how closely they aligned with the unwritten code I had used to try to guide my own life for several years,” Smith wrote. “I realized, happily, that these were my people and that I had been a Satanist for several years without even knowing it.”

Finally, Smith couches the murder of the unborn in typical Democrat-speak, justifying killing babies, which is human sacrifice as practiced by Satanic cults, as a “right,” thus:

“Everyone who cares about women having autonomy over their bodies should care about efforts to use religion to chip away at this right. We need to think outside the box to challenge what is coming and what is already here. The Satanic Temple is already doing that, and by becoming one of its members, I believe I have joined a community of people who will stop at nothing to safeguard my family’s rights― and all of our rights― when they are at their most vulnerable.”

Three times Smith refers to wanting the ‘right’ to exist “for her daughters” to kill their own offspring.

The Left has descended into something that they do not even understand. When you hear me say this election is a choice between good and evil, be assured, I took great pains to study Democrats before making that assertion.

What Democrats don’t realize is that there is no safe version of Satanic involvement. They have taken the embodiment of evil—the devil—and made him a revolutionary hero.

Moreover, they do not understand the urgent difference between Satanism and Christianity when it comes to the supernatural. To become a Christian and receive the Spirit of God you must make a conscious surrender. With Satanism and the occult no such precondition exists. In other words, if you dabble with any form of the occult, even playing with a Ouija board as a joke, you will invoke demonic activity, and you must repent of it, renounce it, and you will need to be prayed for, for deliverance. Even when Democrats are atheists, if they practice Satanism, they have invited supernatural evil into their midst.

The real evil comes from a single tenet of the Temple of Satan, and Kylee Zempel rightly identifies it: “One tenet, in particular, is notable: “The struggle for justice is an ongoing and necessary pursuit that should prevail over laws and institutions.” In other words, the law is dispensable in the pursuit of justice — a remarkable statement coming from an attorney. The ends of equity justify the means of tearing down institutions. Sound familiar?

“This principle, which the Satanic Temple articulates and Smith affirms, absolves the rioters who are pillaging America’s cities under the guise of “social justice.” It supports illegal social programs that promote a so-called oppressed group, while discriminating against another group. It exonerates election fraud by those who reason that the “fascist” President must be removed from the White House by any means necessary. This idea reeks of moral relativism and guarantees lawlessness.

“To adopt a tenet such as this is an interesting response to the death of a Supreme Court Justice and an interesting way to cope with the fear that one’s legal ‘rights’ will be infringed. If equity is greater than the law, how does the Constitution fit in? If justice ‘should prevail over laws and institutions,’ there will be nothing left for the Supreme Court, an institution itself, to protect.”

Satan has emerged as a hero to leftists. They don’t see the issue. They have been deceived. Seeking justice over law, opens the jaws of hell to a society. Justice can be defined as whatever they want. As soon as they define what they think they want, they can wreck anything to get to it.

Justice—perverted and demonically inspired—is how Satanism and Democrats found each other.

Now you know why a segment of the Democrat Party is keen to defund the police. Now you know why even mainstream Democrat leading newspapers have written about looting being justified. Now you know why they will not shut down rioters, arsonists, and even killers. Now we know why there is a clear correlation between the demon god Moloch that commanded his worshippers to burn their infants alive, and late term abortion. They are both after justice—social justice…WHAT A PERVERSION!

Satan sincerely believes his fight against God is a fight for justice. Now we know who is giving the Left their definition of “justice.”

History will not be kind to this generation of American Christians because they were slow to admit the Democrat Party is Satanic. Until we stop the denial in churches we cannot hope to stop this evil. This is supernatural evil not politics. To muster the weapons of God against this evil we must fully accept what we are facing: A Demo/Satanic movement.

P.S. Will you join me on the frontlines? Volunteer for Living Proof Sacramento! Use this link to sign up now,

49 thoughts on “HOW SATANISTS AND DEMOCRATS NATURALLY FOUND EACH OTHER.”