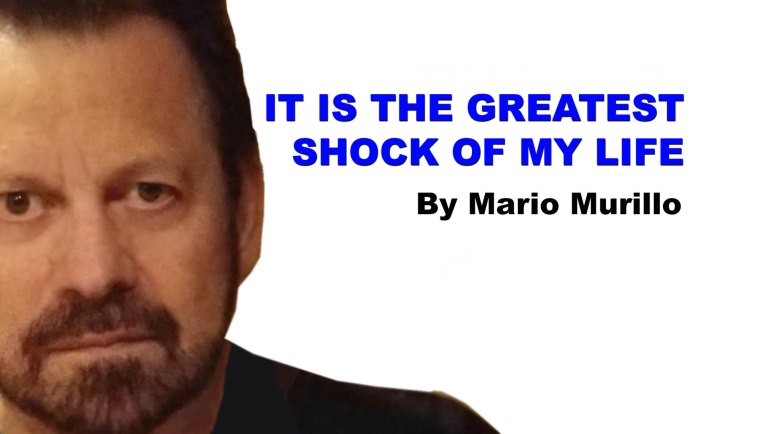 It is the greatest shock of my life that the American church has remained dormant. What atrocity must the Democrat Party commit before the American Church rises in appropriate outrage and rises to do her duty? By now, any other generation of Christians would be galvanized and unified in holy outrage.  Any other generation of preachers would be thundering from pulpits shaking drowsy believers awake.

The Democrats have rabies—and their bite will destroy our nation. Don’t believe me?  Take a look at what they did just today.

–Today Democrats have shifted from legal immigration to open defiance of Federal Law. It was brewing, but now it is being finalized. They do not want to fix immigration, and are determined to break the law.

“But it is quite another for Democratic leadership to declare, with near unanimity, as is the case with the party’s presidential candidates, that they wish to decriminalize entering the country without permission and to grant those who do so government-paid health care. The same goes with states now offering paid college tuition and driver’s licenses to people who crossed into the country illegally.

“Such positions are a neon “welcome” sign on the border that tells those who want to come here without following the rules that there will be no negative consequences for doing so. While liberals say Trump’s claim that they support “open borders” is a lie, there’s no other way to describe the net effects of such policies. Democrats now support treating entering the country illegally as the moral equivalent of jaywalking or spitting on the sidewalk.”

When will you see that we are being invaded? Our way of life, our faith, our very existence.

-Today Democrats voted to impeach President Trump.  They have zero grounds to impeach Trump and are doing it simply out of hatred for the man. This is rogue government, pure and simple. The fact that the vote failed does not change the outrage of how vulgar and out of control the Democrat House is.

-Today Elizabeth Warren hired a pro Hamas Aide to cement her hatred of Israel. “Adam Kredo at the Washington Free Beacon reported that Warren recently hired anti-Israel radical Max Berger, who helped to found the IfNotNow organization, a group that has devoted itself to damaging Israel’s reputation in America under the guise of seeking an end to Israel’s “occupation” of Judea and Samaria and East Jerusalem.

Today, the Democrats declared that anyone who disagrees with them is a racist.

You already know that they support banning the Bible, Christian T-Shirts, prayer, and sermons they deem homophobic or Islamophobic.  They believe in killing babies even after they are born. They are in lockstep with Facebook, YouTube, Instagram, Google, and Twitter to control information and blackout any content that supports Trump’s reelection.

Not only this, but there is also their concerted attack on the Founding Fathers, which is their pretext for altering the American Constitution and decertifying the Declaration of Independence.  The absolute worst mixture is ignorance with arrogance. Democrats are held hostage by voices that at any other time in history would be silenced in a heartbeat.

All of this begs several very big questions:

How can the church still be silent?

How is it possible that some pastors will still advise their people to vote for Democrat candidates?

If our faith is not about stopping this, then what is it for?

Why are some still teaching a tired falsehood—the lie that Jesus doesn’t want us to choose sides in such a blatant case of good versus evil?

And the last question: What is the American Church waiting for?

Democrats are not a political party anymore—they are a criminal enterprise that is mobilizing to remove your rights, ban Christianity, and legislate immorality.

Tragically, many modern American Christians have proven that they can stomach the vileness. This is especially sad, because that seems to be the only real strength they have—a tolerance for immorality. And do the preachers of this era have any inkling of how history will judge their deafening silence?

Democrats will create chaos and tyranny. Ignoring this will condemn your children and grandchildren to live in a world that is too horrible to describe. Worst of all, you won’t be there for them.  Maybe you don’t feel great outrage over what you consider a ‘secular’ subject, such as politics…but dear God, what will become of your children?

Nehemiah exhorts us from across the ages: Nehemiah 4:14, “And I looked, and arose and said to the nobles, to the leaders, and to the rest of the people, “Do not be afraid of them. Remember the Lord, great and awesome, and fight for your brethren, your sons, your daughters, your wives, and your houses.””

It is at this point that I wish to offer you some comfort.  You may remember in A Christmas Carol by Charles Dickens, when Scrooge is terrified when confronted by the ghost of his former partner, Jacob Marley, in the dank, dark bedroom of Scrooge’s London home.

Cowering in fear, Scrooge cries out, “Jacob! Old Jacob Marley, tell me more! Speak comfort to me, Jacob!” With that the ghost candidly replies, “I have none to give. Such comfort comes from other regions, Ebenezer Scrooge, and is conveyed by other ministers, to other kinds of men.”

I reach deep down inside, and struggle to find what words of comfort I can offer—but I cannot lie—I cannot find any. Often, like Marley, I have no comfort to give.  The truth and comfort collide. I wonder.

Arise, church of God!  Take up the weapons of your warfare, and fight for your nation and your families— and fight the evil that threatens us all, in the Name of Jesus! 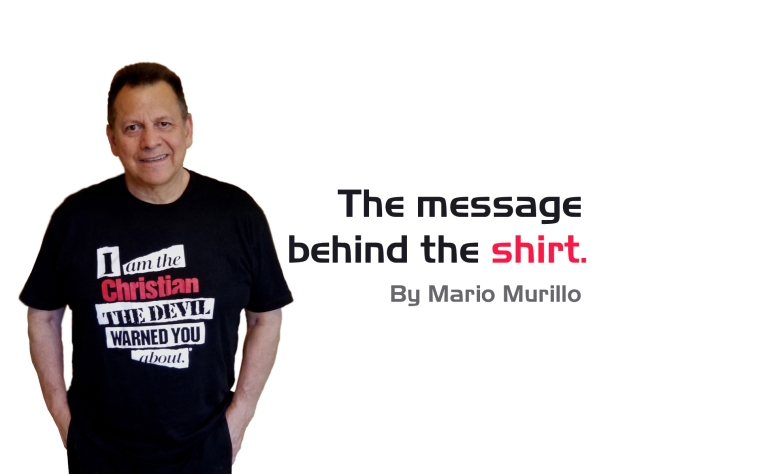 Look at message on the shirt.  Is it an offensive in your face message?  No, it is a desperately needed in your heart message.  So, before you judge, get the message behind the shirt.

Let’s begin by understanding something about Satan.  He fears. He fears things deeply.  In fact, his fears are far deeper than yours will ever be.  He fears many things.

Near the top of his list of fears is this one: He fears the genuine Christian.  He understands how contagious a real believer—free of both anger and sin—can be to a generation.  People feel things around such a person.  People find themselves wanting whatever a true believer carries.

I wrote a book entitled I am the Christian the Devil warned you about.  I’ll admit it is not my best effort.  Parts of it make me wince.  But just because I didn’t do a masterful job on the story, doesn’t mean the message isn’t important.

Anyway, in the book there is an encounter with Satan right in his lair.   The protagonist, Daniel is invisible to Satan (Daniel doesn’t know why).  He hears Satan betray one of his greatest fears.  (Before you peruse an early attempt at writing, remember kindness is one the fruits of the Spirit.)

“How can I describe to you the strange sense of destiny I felt? To know that I was standing before the elite of hell, Hearing, their plans, sensing their fears, and yet be totally hidden from their view? I listened with intense anticipation to what Satan would admit next.

‘One authentic Christian,’ he wailed, ‘in which Christ works without resistance is all that it would take to disrupt everything.’ The Father of Lies contorted as if he was having a momentary seizure.  His minions reeled for they had never heard him concede to saying the name of the Lord.

Lucifer continued, ‘One true Christian, rightly fitted for war, will be the ruin of us. Listen, you banal beasts, if just one could read and discover how to ask and then receive, if just one would embrace their potential . . . but most of all if just one were to discover the One who is ever with them to make them strong, wise, and miraculous, then . . .’ At the mention of God’s Spirit, the entire company involuntarily dropped and ducked for cover…”

For this reason, Satan uses most of his energy to create imbalance.  If enough Christians are created and stay in their natural state, revival is inevitable.  Satan understands that revival is a weapon of mass conversion.

As the master of extremes, he’ll make things important to churches that are utterly trivial.  He makes leaders jealous of each other, so they’ll lose their first love—love that would compel the unchurched to be saved.  He sends great temptation to visible Christians, so they will fall and be called hypocrites.  I could go on and on.

If discrediting the Bible is his top priority preventing real Christians is next.  What do people who fear do a lot of?  They lie, and they gossip.  Gossip is rooted in fear and jealously.

A real Christian reminds Satan of the two things that cause him the most agony:  The fellowship he lost and the judgement he is about to gain.

At this moment Satan is broadcasting a global subliminal message: Watch out for the real Christian—the loving Christian—the joyous and holy Christian.  If you wish to stay an atheist—if you wish to remain addicted, miserable and empty…don’t go near one of these.

We aren’t slamming anyone but Satan.  So, we say with a smile and a heart full of love.  You know that Christian that Satan told you to avoid?  That would be me.

Join us for our 4th Annual Living Proof World Convention.

Our 4th annual Living Proof World Convention.  March 8-11 Faith Life Center Ontario CA  (Eastvale)You are going to a convention or conference this year.  Why not choose the one that will change your life?  Those who have been there don’t need to be convinced.  They would tell you.  My 3 guests are in my opinion the emerging voices of revival. Click on the Link to register now.  It’s free but you must register Click below to get your free tickets to this convention.