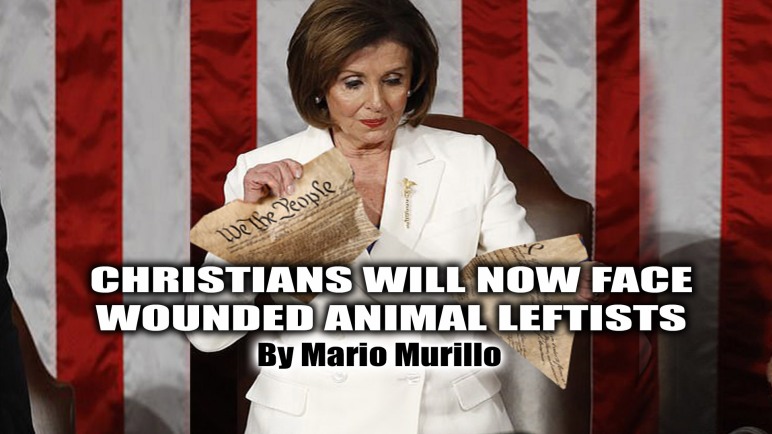 In Obama’s State of the Union Address in 2013, there was a boatload of lies. Not the least of which were, “If you like your doctor, you can keep your doctor,” and, “Your healthcare costs will go down.” Now, can you imagine the media firestorm that would have ensued if the Republican Speaker of the House had ripped up that speech?

And imagine the outrage if conservatives everywhere had tweeted obscenities and death threats when Obama was elected, or when he was awarded the Nobel Prize.

However, the disaster we face today goes far beyond this epic double standard. You have heard that Nancy Pelosi ripped up Trump’s speech out of frustration. The media has reported that she regrets giving in to the pressure to impeach Trump that was put on her by the radical fringe of her party. Both of those theories are wrong. It is very obvious that she regrets nothing.

Even after the Iowa Caucus debacle, they see no reason for soul searching—because they have no soul to search. They know they are incapable of running the country. They know they have no plan for America, but they don’t care.  Leftists in America are now wounded animals. They are now driven by hatred and blind rage.

When you catch them lying, they don’t care. When you prove their folly, it no longer matters. They will not listen to anyone who is centrist or recommends they stop the endless investigations, or their screaming vituperation.

Nancy was sending a signal to leftists everywhere that moderation is out the window. Rules are gone. Laws don’t matter to them anymore. Her pre-planned, video-captured, under the table surreptitious pre-tearing of the speech, was a declaration of war.

The Left in America will now totally disregard decency, precedent, and the Constitution—even though it will ultimately bring about their own self-destruction.

Nancy has not only given in to the radical wing of her party, she will lead it, as they unabashedly push for a scorched-earth policy against Trump, evangelicals, and conservatives. All pretenses at civility are gone forever. The gloves are off.

Consider this: The House of Representatives is about to introduce a bill called ‘The New Way Forward Act, H.R. 5383’. This bill will make it impossible for an illegal, even one who commits murder, to be deported. It will completely strip I.C.E. of any authority to arrest any illegal who commits a felony. You, the taxpayer, will also be required to pay for their health coverage. Finally, ‘The New Way Forward Act’ will make it a law that all of the 450,000 illegals who have been deported must be returned to the United States, and you will pay for it. Estimates are that the plane tickets alone will cost one billion of your tax dollars. Read the bill yourself.

Why would they do such a thing, you may ask? Ask yourself, rather, Why would the Democrat Party want to bring in 450,000 new voters, who would be likely to vote for them?

And, why would Pete Buttigieg go on The View and defend a woman’s right to kill her baby even after it is born? He knows there is a recent trend away from abortion. After all, he is supposed to be the rational candidate. He did it because the Left is now a wounded animal, and they are doubling-down on their policies.

Joe Biden will soon drop out, because he represents the old guard. He is playing catch-up, and trying to sound radical, but it is too little, too late.

Hear me child of God. I am trying to tell you truthfully what I believe you must do in the face of this wounded animal. It is a time to discern the works of the evil one, and to fervently seek the face of God.

What is God doing in this situation? There are two possibilities: He is either using the Left to bring judgment on America and the church—or He is driving the Left to an extreme that will cause our nation to finally and fully reject the atheistic immorality known as Liberalism, which has been a cancer on our culture.

I pray the Lord is using this situation to provoke us to true repentance and revival. I am holding to the hope of revival.

When Nancy very publically tore up that speech, any chance of compromise with Democrats was gone. Maybe you are still queasy about President Trump. Believe me, the insanity you are about to see from the Left will soon cure that. Maybe you are waiting to make a decision about where you will stand…I’d say it has already been decided for you.

The time to act is now. Get everyone you know registered to vote, seek the face of God, and prepare for battle!

The Democrat Party has been on the wrong side of almost every issue as it relates to the Bible, ever since they booed at the mention of God at their 2012 Convention.  Now, they have made it official with a resolution to affiliate with atheists, or as they put it, “the irreligious.”

According to the Friendly Atheist, the Democratic National Committee passed the resolution over the weekend, which heralds the “value, ethical soundness, and importance” of non-religious Americans. 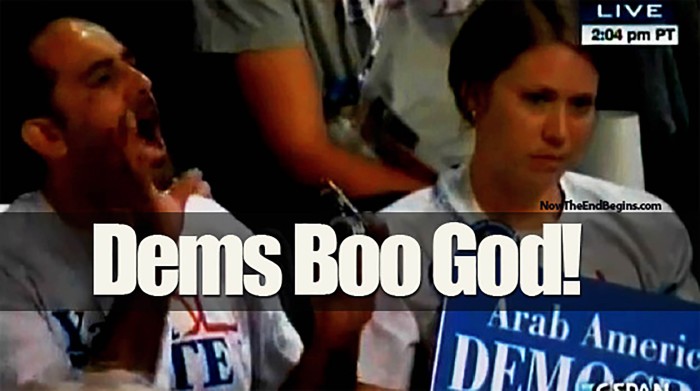 A .pdf file of the resolution is hosted at Secular.org (not surprisingly) and can be read here.  It states…

WHEREAS, the religiously unaffiliated demographic has tripled in the last two decades, now representing 25% of the overall American population and 35% of those under the age of 30; and

WHEREAS, the religiously unaffiliated demographic represents the largest religious group within the Democratic Party, growing from 19% in 2007 to one in three today; and

WHEREAS, the nonreligious have often been subjected to unfair bias and exclusion in American society, particularly in the areas of politics and policymaking where assumptions of religiosity have long predominated; and

WHEREAS, those most loudly claiming that morals, values, and patriotism must be defined by their particular religious views have used those religious views, with misplaced claims of “religious liberty,” to justify public policy that has threatened the civil rights and liberties of many Americans, including but not limited to the LGBT community, women, and ethnic and religious /nonreligious minorities; and

WHEREAS, the Democratic Party is an inclusive organization that recognizes that morals, values, and patriotism are not unique to any particular religion, and are not necessarily reliant on having a religious worldview at all; and

WHEREAS, nonreligious Americans made up 17% of the electorate in 2018 and have the potential to deliver millions more votes for Democrats in 2020 with targeted outreach to further increase turnout of nonreligious voters; and

WHEREAS, a record number of openly nonreligious candidates are running for public office;

NOW, THEREFORE, BE IT RESOLVED, that the DEMOCRATIC  NATIONAL COMMITTEE recognizes:

The value, ethical soundness, and importance of the religiously unaffiliated demographic, a group of Americans who contribute in innumerable ways to the arts, sciences, medicine, business, law, the military, their communities, the success of the Party and prosperity of the Nation; and

That religiously unaffiliated Americans are a group that, as much as any other, advocates for rational public policy based on sound science and universal humanistic values and should be represented, included, and heard by the Party. (end of quote)

Pulpit and Pen.Org said, “At least the DNC can acknowledge that un-religious people overwhelming affiliate with the Democratic Party over the Republican Party. Whether it’s good or bad, it’s nonetheless true.

“One can only imagine the kind of ethical chaos, impending genocide, and human suffering that will be commonplace if the “humanistic ethics” of the Democratic Party were to triumph in every district and precinct in the United States.”

Democrats have officially sided with atheism against your faith. They have transcended politics and moved to open hostility toward your faith. They have already proven they will ban beliefs they disagree with, so you must now make your choices based on a new reality: they will move to strike freedom of religion—specifically, Christianity and Judaism—from the Bill of Rights and from the laws of the land.

Yet, there may be an upside. Pen and Pulpit said, “If the Democratic Party wants to continue to alienate religious Americans—especially in the African American and Hispanic community (which are both far more religious than the white liberals who form the largest Democratic demographic), they can go right ahead.

“We’ll make room for ethnic minorities in the Republican Party, just like we did during the days of abolition.”

One thing is very clear. If you are a Christian, they don’t want your vote, and they are using statistics to show they don’t need your vote. It is all out in the open now. The Left has moved away from the principles upon which this nation was founded. They have moved to the far left, and are embracing the atheism that is espoused by both Socialism and Communism.

Every Bible-Believing Christian must now realize that this next election is not just about Trump, it is about atheism versus faith in God.

Please pray with us for the coming 2020 elections, and pass this article on to every believer you know!