SOMETHING IS RISING OVER RENO

The outside world holds on to a myth that Reno is a dusty back alley overrun by alcoholics and drug addicts.  Some locals don’t mind this myth if it will keep the population from exploding.   However the secret has gotten out that Reno is the future.

Companies like Tesla, Apple, Amazon and other bulwarks of Silicon Valley have done their homework and realize this. They also know that there is a quality of life… of family life that improves every day. That is why they have relocated major operations to Reno. 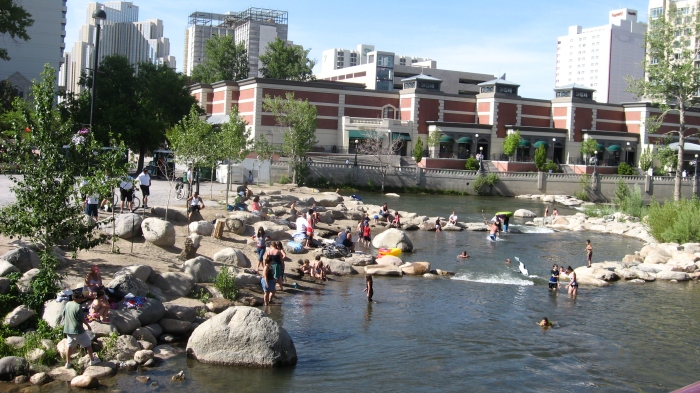 However there is something else about Reno that we wanted you to know.  On March 30, 31 an extraordinary gathering of Christians will take place in Reno called the LIVING PROOF WORLD CONVENTION.   It all began when Evangelist Mario Murillo felt compelled to move his ministry to Reno.  Here he explains his move:

“This is where the vision will have room to breathe.  This is where we will build the fresh approach to a timeless message. In this place, we will develop signs and wonders Crusades, send out evangelists and dig a well of uninterrupted intercessory prayer for an American Awakening.

We will not make a flashy entrance or present ourselves as some kind of cure to the city.  We are soldiers on assignment and we want to find our place in what Jesus is already doing here, and come alongside those who will receive us.

We are not here to replace but to replenish existing outreaches here.  We will not barge in or force ourselves on anyone but we will extend a humble hand of friendship, help and the opportunity to see revival.

We will grow deep roots in Reno; however our target is the United States.   This is our staging area to choose targets cities for LIVING PROOF.”

LIVING PROOF has this simple message to the unchurched culture of America: “Trade an evening of your life for a touch from God that can last a lifetime.  Come if you need healing.  Bring someone you love who needs a miracle.  Come because we have living proof of God’s love and power in our time.”

The LIVING PROOF WORLD CONVENTION marks the official launch of this nationwide crusade.  However, this convention is much more than that.

This is why we want to invite you to two historic days of the Living Proof World Convention. The theme of this convention is The Power and the Plan to save America.

Everyone knows that America is in dire need of a supernatural awakening.  The power and the plan for such a miracle must come from the Holy Spirit.  He has the only plan and the only power that will work.

We are surrounded by prophetic words that promise a massive harvest but what will touch off the explosion that will sweep millions into the Kingdom?  And how would we function during such a miracle?

We are certain that He has shown a plan and a path to power that we want to share with you.

Many preachers are desperate to break out of molds that are holding back their effectiveness. It is our deepest desire that this world convention ignite fires of momentum for continual harvest in every ministry that comes to this event.

Our conviction: The American Church will not be turned around by supermen but by supernatural men. We do not need better equipment, new organizations, novel methods, but vessels that the Holy Ghost can use—vessels who pray with prevailing might.  God does not flow through religious machinery but through human beings, he does not anoint plans, but people—people of prayer.

Do not sit back and watch dark clouds gather.  Sweep away the cobwebs, underbrush and weeds of despair and take action!  It is high time for you to put on the full armor of God’s power.

This prayer of Peter embodies this convention:  Acts 4: 29  Now, Lord, look on their threats, and grant to Your servants that with all boldness they may speak Your word, 30 by stretching out Your hand to heal, and that signs and wonders may be done through the name of Your holy Servant Jesus.” 31 And when they had prayed, the place where they were assembled together was shaken; and they were all filled with the Holy Spirit, and they spoke the word of God with boldness.

Here are some urgent final statements.  Pray and ask God if you are to be a part of this groundbreaking event.  Act boldly and do not let fear stop you from coming.   God will make a way if you are truly serious about having power in these end times.

“Join Mechelle and me for the Renovation of your life and ministry.”  -Mario Murillo

The Living Proof World Convention has one simple goal:  To restore the roar of the American Church.

The Living Proof World Convention will be held at the Boomtown hotel and Casino in Reno in just a few weeks: March 30 and 31.    There is no registration fee for the convention but you must register.

To register call us now at 775 432 1665 OR CLICK HERE NOW TO INSTANTLY REGISTER ONLINE:       http://mariomurillo.net/living-proof-world-convention/

Why I Moved Out of the San Francisco Bay Area.

Something impossible has happened to me.  My closest friends never thought it could happen.  I have moved out of the San Francisco Bay Area. There was no version of my future that included leaving the San Francisco area.  Moving me out of here is like uprooting and transplanting an ancient redwood. Here’s why:

-San Francisco is infinitely more to me than a hometown.  San Francisco is my strange holy land.  My first and my deepest encounters with Christ and the supernatural were here.

-With the exception of just two years, I have never lived anywhere else but here.

-The most amazing prophetic promise I ever received is about San Francisco:  In 1978 I Told God that I quit.  God said, “Pray one more time.” An hour passed and suddenly God promised me “I will pour out of my Spirit on the San Francisco Bay Area and the world will look and wonder.” This promise made me angry!  I screamed to God, “I cannot carry this without an infallible confirmation right now!  As the word “now” came out of my mouth the phone beside me starting ringing.

It was the last voice in the world that I could have ever imagined to hear!  “Mario, this is Bob Dylan.”  He was calling because he was about to perform his first Christian concert at the Warfield Theater in San Francisco.  He asked me to come and pray backstage at the concert while he performed.  Just as we were about to hang up he asked me “Mario, did God tell you He was going to pour out His Spirit on the Bay Area?”  Losing my breath and about to faint I said, “Yes.”  To which he responded, “Well Mario, He is going to pour out His Spirit on San Francisco.”

-Through incomprehensible adversity, we obeyed God and stayed based in the Bay Area.  In obedience to that promise God used us to make Christian history culminating with 14,000 people in the Cow Palace Arena.

Only one thing could ever make me move: The Holy Spirit told me and my wife to sell our home and relocate out of the Bay Area.  However He did not tell us where to move!

Our home sold in 28 days.  We had to scramble to move without knowing why or where.  It was not until just two weeks before we had to be out of our home that God made it absolutely clear where we belonged.

We made an offer on a house, raced back to the Bay Area and scrambled to find temporary housing for the 30 days it took for escrow to close.

Meanwhile the mighty outpouring of the Holy Spirit was flooding Los Banos California.  We concluded that we should find an extended stay facility in Morgan Hill which was a central location to Los Banos and everything else we had to do in the Bay Area.

We moved into our new home.  So where is our new home?  We now live in Reno, Nevada. I can hear you repeating it out loud…Reno?!  Even as the furniture went into our house we were still asking that question!   Here are the answers:

Our headquarters must reflect both our boldness and our urgency…but why Reno?  We still did not know but some very savvy people did know…people who control billions of dollars and do the very best research…people who looked at California, Texas, New Mexico and Arizona.

Now here is something that truly boggles my mind: We moved into Reno at 3PM on Thursday, September 11, 2014.  Five hours later, after months of secret negotiations the Associated Press broke this story:  “Calling it one of the most important pieces of legislation in Nevada history, Gov. Brian Sandoval signed into law Thursday night an unprecedented package of incentives to seal a deal to bring Tesla Motors’ $5 billion battery factory to Reno, Nevada.

The “gigafactory” is expected to bring more than 20,000 jobs and $100 billion to Nevada’s economy over the next 20 years. It will be the biggest lithium battery factory in the world.”

BUT WAIT THERE’S MORE!  Apple Computers made this announcement:  “The Company will invest $1 billion over 10 years to build a center at a new technology park near Reno, Nevada. The data center project is part of a development plan in which the company will also build a purchasing center in downtown Reno. An Apple spokesman told local officials that the company expected the new facility at the Reno Technology Park to come online later this year.” 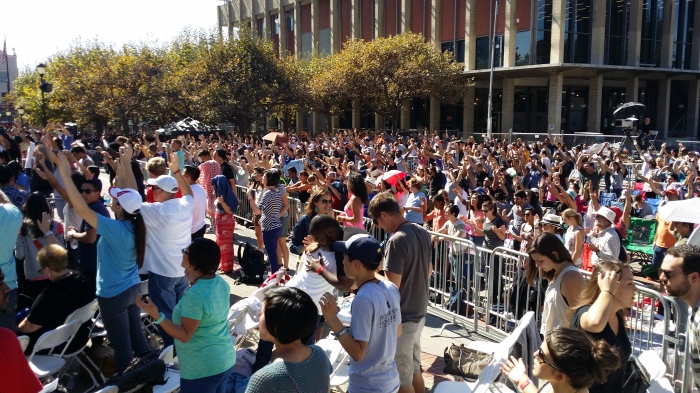 It was also something else; it was a time of emotional closure between me and the Bay Area.  Of course I will still contend for revival here and work with anyone who wants to win souls here.  But I was released from a Bay Area covenant.

Alone in prayer I grieved and mourned for a season that had passed.  Then God told me something tragic.  But before I tell you what He said let me remind you of something.  Over the years, we have been threatened and told to leave by the Black Panthers, the Weather Underground (who threatened to bomb us), Satanists, drug dealers, a host of cults and anti-God politicians.  We just laughed at their threats!

Then a group of ministers in their own way basically asked me to leave the Bay Area.  I never gave it a second thought because who were they compared to these past threats?  That is when I heard the strangest thing that Jesus ever said to me… “Honor their request and leave.”   That is what it took to pull out the deepest roots and allow me to relocate to Reno.  I have not a drop of anger, unforgiveness or malice.  You will never hear me name names or defend myself. I am far too excited about the future!  I am free now to build a great vision for a nation that must be saved!