My new cartoon has leaked a little early, a few fans got a little over excited about this cartoon and posted it on the /r/ The_Donald..that’s okay, it is very timely.

Obama doesn’t want to say ‘Islamic Terrorism.’  It’s obvious he doesn’t want to condemn Islam in any form. He’d much rather attack the 2nd Amendment and ‘bitter clingers.’ He wants to round up the guns while at the same time, more guns have been sold to Muslims in the middle east than ever before under his administration. Hillary murdered Gaddafi and made sure ISIS got guns. That happened under Obama’s watch.

The liberal lens wants to make sure the focus and blame always goes to conservatives, whom they call names such as ‘racist’ and ‘bigot’—especially conservative Christian gun owners. Obama uses the lens to help him to avoid looking at a harsh reality—Islamic terrorists DO exist. They are created in part due to senseless war in the middle east perpetuated by Obama and his masters.

Many Muslims want Sharia Law—not our Constitution. Yet Obama wants to import millions more. If we object, we are called ‘racist.’ Islam is not a race.

Americans are fed up with excuses, obfuscation and lies told by leaders who refuse to connect with reality. Americans are sick and tired of being called ‘racist’ or other names simply because we don’t want to import millions of people who don’t assimilate well into western culture.

It’s time to put down the leftist lens when viewing reality. 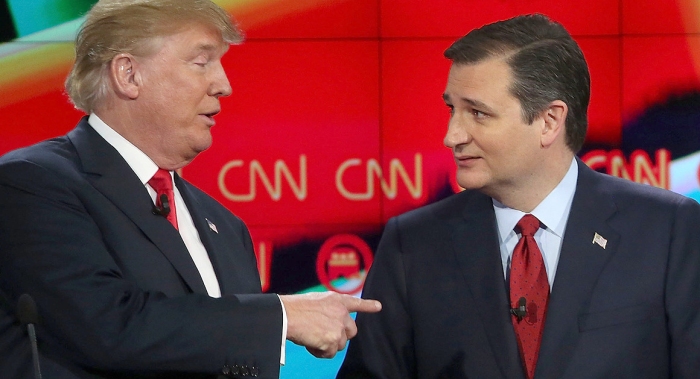 The prospect of either man as the Republican nominee is setting off alarm bells among officials and operatives across the country.
By ALEX ISENSTADT 01/05/16 05:11 AM EST

With only weeks before GOP primary voters first cast their ballots, the level of alarm among establishment Republicans about the enduring dominance of Donald Trump and Ted Cruz is reaching new heights.

In private conversations with several former aides, Mitt Romney, who in March will keynote the National Republican Congressional Committee’s annual fundraising dinner, has expressed rising frustration about Trump’s prolonged lead in polls and has argued that the real-estate mogul could inflict lasting damage on the party’s brand.

In Washington and elsewhere, meanwhile, Republicans are on the hunt for a political entity that can be used to stop Trump. In recent weeks, Alex Castellanos, a veteran TV ad man who was a top adviser to George W. Bush and Romney, has been meeting with top GOP operatives and donors to gauge interest in launching an anti-Trump vehicle that would pummel the Manhattan businessman on the television airwaves.
Those who’ve met with Castellanos say he’s offered detailed presentations on how such an offensive would play out. Castellanos has said that an anti-Trump ad campaign, which would be designed to cast him as a flawed strongman, would cost well into the millions. It was unclear, the sources said, whether Castellanos, who did not respond to a request for comment, would ultimately go through with the effort.

One growing worry about Trump or Cruz, top party officials, donors, and operatives across the country say, is that nominating either man would imperil lawmakers in down-ballot races, especially those residing in moderate states and districts.

“At some point, we have to deal with the fact that there are at least two candidates who could utterly destroy the Republican bench for a generation if they became the nominee,” said Josh Holmes, a former chief of staff to Senate Majority Leader Mitch McConnell. “We’d be hard-pressed to elect a Republican dogcatcher north of the Mason-Dixon or west of the Mississippi.”

“Trump and Cruz are worrisome to most Republican candidates for governor, senator and Congress,” said Curt Anderson, a longtime GOP strategist and former Republican National Committee political director. “Some will say they are not worried, but they are.”

Romney has been calling around to former advisers to sound them out about the race, and to kvetch about Trump’s surprising durability. But in the immediate term, at least, he has expressed unwillingness to lend his hand to a stop-Trump effort — or to endorse a candidate more palatable to a GOP establishment paralyzed by his rise and worried that nominating him or Cruz would scupper an opportunity to control both the White House and Congress in 2017.

The concern is particularly acute in the Senate, where Republicans are fighting to preserve a relatively slim four-seat majority, defending more than half a dozen seats in hard-to-win swing states. Among them: Ohio, a presidential battleground state where Republican Sen. Rob Portman faces a perilous path to reelection.

When Trump traveled to the state in November, he met with Matt Borges, Ohio’s Republican Party chairman — who warned the front-runner that “divisive rhetoric won’t help us carry Ohio.”

“It’s time for people who have never won squat here to listen to the people who have been doing it for decades,” Borges said in an interview. “I’m just looking out for how we win in November.”

In Wisconsin, some party officials fret that a Trump or Cruz nomination could sink Republican Sen. Ron Johnson, who faces a tough race against his predecessor, Russ Feingold.
“Certainly, it would be bad for Ron Johnson if Trump is the nominee,” said Wisconsin Rep. Reid Ribble who, like Johnson, was swept into Congress in the Republican wave of 2010. “I think Trump is probably really bad down-ballot.”

Some top party strategists have spent months considering how the outcome of the primary will impact congressional races. Since last spring, the National Republican Senatorial Committee has been poring over research and polling data in hopes of better understanding how each of the Republican candidates running for president would affect GOP hopefuls running for Senate. The committee has held internal meetings to discuss the pros and cons of each presidential contender and how they would affect each key Senate race.

The House, where Republicans have a historic 30-seat majority, is more secure for the party. But there, too, the GOP has reason to worry: The party must defend nearly three dozen endangered seats — many of them in liberal-to-moderate states like California, New York and Florida.

Should Trump or Cruz win the nomination, party operatives say, some longtime officeholders in more conservative districts such as New Jersey Rep. Scott Garrett or Florida Rep. John Mica, who typically skate to general election wins, could find themselves in tougher-than-usual contests.

Cruz’s campaign pushes back on the idea that the Texas senator would imperil those running in House and Senate races. A Cruz nomination, they argue, would motivate conservatives to turn out to vote in a way that an establishment candidate couldn’t.

“Down-ballot Republicans need Ted Cruz at the top of the ticket because he is the only candidate in the race who can excite the base to show up in November,” said Rick Tyler, a Cruz spokesman. “If we chose another moderate, we will simply lose seats we would otherwise win.”

Trump’s campaign didn’t respond to a request for comment.

Some, though, are already counseling Republican candidates to begin to think about how to distance themselves from a Trump or Cruz in the event either wins the nomination.

“Candidates will need to develop their own brand,” said Pennsylvania Rep. Charlie Dent, a Republican who has represented a swing district in Lehigh Valley since 2004. “A candidate will need to run his or her own campaign and distance themselves from the top of the ticket.”

Among the tricky questions candidates will be forced to consider: whether it’s worth endorsing either potential nominee.

Illinois Rep. Bob Dold, a Republican who represents a liberal-leaning, suburban Chicago district, said he had ruled out endorsing Trump. He declined to say whether he’d back Cruz.

While Dold said he was monitoring the primary, he argued that voters would be willing to look beyond the party’s presidential nominee when determining his fate in November.

“Illinois 10th District,” he said, “has a long history of ticket splitting.”