Gold Star mom: ‘MY SON DIED ‘LOOKING FOR A TRAITOR?’ 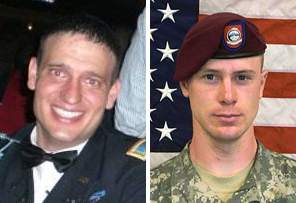 The sergeant’s return to captivity has stirred “very raw emotions.”

“It gets really hurtful when I think, this guy was worth my son’s life? My son who was patriotic? Who was a true soldier? Who defended his country with his life?” Andrews told Army Times via phone on Monday. “That guy was worth that? I don’t think so.”

Andrews also was upset to hear the U.S. government agreed to release five prisoners from Guantanamo Bay in exchange for Bergdahl’s freedom.

“I bet you anything there were soldiers killed or wounded capturing those five guys,” she said. “So what does that do for their sacrifice? They sacrificed for nothing, because they turned right around and let them go.”

Bergdahl disappeared June 30, 2009, from a base in Paktika province, near the border with Pakistan.

Soldiers who say they served with Bergdahl have since spoken out on social media and in news reports that the then-Pfc. abandoned his post, wandering away from the combat outpost on his own. Many expressed anger that soldiers were killed while searching for Bergdahl.

Darryn Andrews was one of those men.

He was killed Sept. 4, 2009, when enemy forces attacked his vehicle with an improvised explosive device and a rocket-propelled grenade, according to the Defense Department notice announcing his death. He was 34.

The military told the Andrews family that their soldier died after a mission to capture a top Taliban fighter, Sondra Andrews said.

“By omission, we assumed they were just pursuing the Taliban,” she said. “Then the guys [Darryn Andrews served with] started contacting me. They said, ‘No, ma’am, we were looking for [Bergdahl].’ ”

“They didn’t have enough respect for us to give us the consideration of letting us know, especially since Darryn was part of that mission,” she said. “As a mother, you’re like, ‘what else have they not told us?’ ”

Within hours of Bergdahl’s disappearance, her son and his soldiers went out on foot patrols to search for him, Sondra Andrews said.

“They found his gear. They knew [he’d left],” she said. “You don’t get captured and leave your gear in neat little stacks. They knew he had walked away from his post.”

Sondra Andrews said she wants to see a full investigation into Bergdahl and the circumstances surrounding his disappearance and captivity.

“The military really owes the parents of these fallen soldiers the truth,” she said. “Just the fact that they’re calling that man a hero just took me to my knees.”

Sondra Andrews said she wants people to know her son was a good man and a good leader who always wanted to join the Army. Darryn Andrew’s son was just 2 years old when his father was killed. His daughter was born four months later.

“He was a wonderful father and family man, an amazing son, a great brother,” she said.