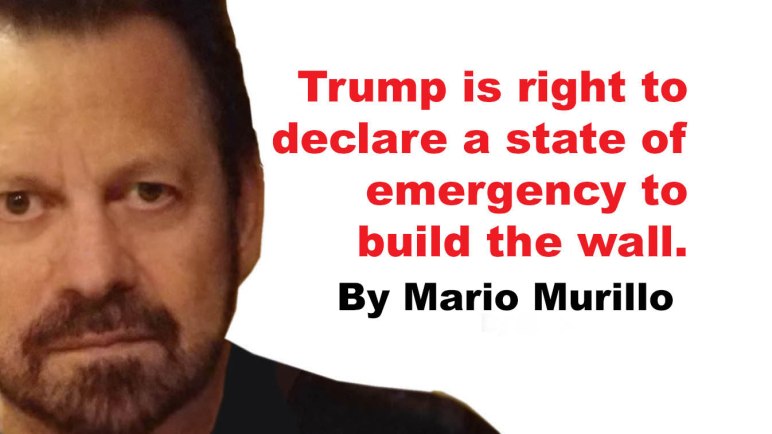 Nancy Pelosi and Chuck Schumer could not be more wrong or cold-blooded on this issue. Trump is right to declare a national emergency to build the wall.  It should outrage every believer and American to hear Pelosi and Schumer call this a manufactured crisis.

They said this front of millions of Americans and thousands of people who lost loved ones to murderers–murderers who had no right roaming among innocent Americans. Murderers that Nancy and Chuck still protect.

No compassion. Not even a nod to those whose husbands, wives, sons, daughters, moms and dads were taken from them. Women were raped, beaten to death with a hammer—neighbors shot, beheaded, dismembered—a young police officer shot and killed the day after Christmas by a man who could not be arrested in Nancy’s home sanctuary state of California. Most of them killed Americans after several arrests and deportations.

The real victims, according to Nancy and Chuck, are the federal workers who  didn’t get paid during the shutdown.   But they will get their money back.  However, none of the real victims of the crisis will ever get their loved ones back.

What kind of a mind can draw a moral equivalence between a family that has lost a loved one to murder and a worker who at worst had their paycheck delayed? That is the manufactured crisis.

What you see should enrage you. They are telling you it’s okay for the killing and looting to go on–that they don’t accept Trump’s facts–facts backed up by those who enforce the law and work at the border. 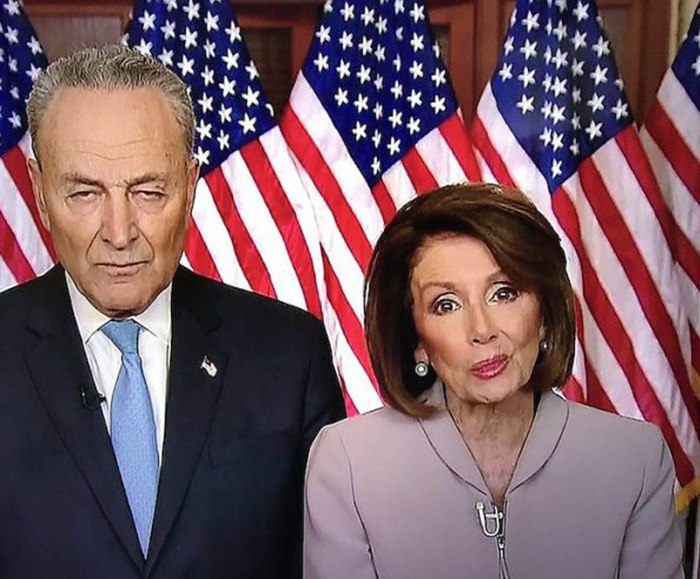 Schumer and Pelosi believe they decide the facts. They issue the only reality we are allowed to believe. They told you that you are too stupid and unworthy to draw any other conclusion than the official one that we give you.  Look closely at their expression it says, “when we want your opinion, we’ll give it to you.”

Trump is a true outsider. That is the root of all the hatred toward him. He shocked the denizens of the Washington swamp by actually keeping his promise. We all know that Chuck and Nancy voted for the wall but only changed their minds because Trump won. They have no motive but hate. They have no plan but to oust Trump.

The wall must be built not just for national security but for national sanity. At some point the people need to see the president they elected exercise the platform that won him that election. If ever a man needed to hold his ground on a matter it is Donald Trump. Do not give in Mr. President. Never!

You are right to declare a state of emergency for two reasons: 1. Drugs and killers are pouring in through the border costing us countless lives. 2. Democrats will let the disaster go on no matter what the cost in lives, so long as they can expand their voter base with illegals. Both are true national emergencies. 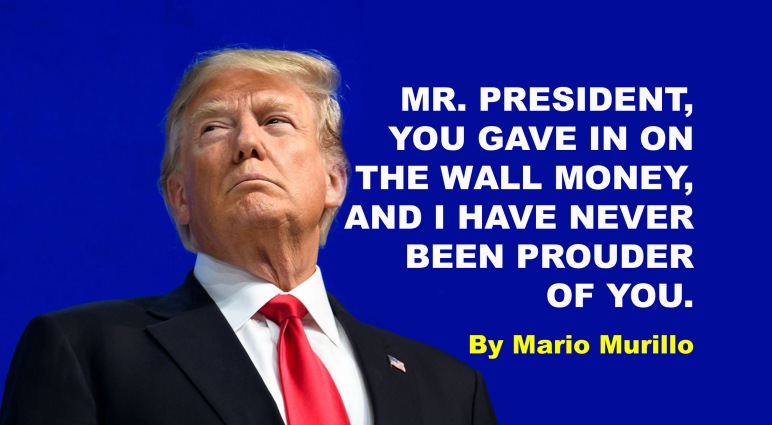 Mr. President, you caved in on the wall and I have never been prouder of you. The wall must be built. It is immoral not to have the wall.  The wall will be built.  So why am I saying that I am proud of Trump for caving on the wall?

All your enemies are parading right now and you are being ridiculed.  But I know the real story.  You did not lose or fail.

This will be the blog that I will get the most criticism for writing. However, I have never been so certain that I am speaking the truth. Please do not be lazy and judge me before you read this.

Look with me at 1 Kings 3: 16 Now two women who were harlots came to the king, and stood before him. 17 And one woman said, “O my lord, this woman and I dwell in the same house; and I gave birth while she was in the house. 18 Then it happened, the third day after I had given birth, that this woman also gave birth. And we were together; no one was with us in the house, except the two of us in the house. 19 And this woman’s son died in the night, because she lay on him. 20 So she arose in the middle of the night and took my son from my side, while your maidservant slept, and laid him in her bosom, and laid her dead child in my bosom. 21 And when I rose in the morning to nurse my son, there he was, dead. But when I had examined him in the morning, indeed, he was not my son whom I had borne.”

26 Then the woman whose son was living spoke to the king, for she yearned with compassion for her son; and she said, “O my lord, give her the living child, and by no means kill him!”

But the other said, “Let him be neither mine nor yours, but divide him.”

27 So the king answered and said, “Give the first woman the living child, and by no means kill him; she is his mother.”

Look deep into the eyes of Nancy Pelosi and what do you see? A grasping, cold heartless individual. Do you believe for one moment she cares about the government workers who aren’t getting paid? How far would she go to keep the government shut down. She would have kept it going no matter how much harm it did to families. She wouldn’t care if people were devastated.

Donald Trump loves American families and especially the American worker. The Democrat party on the other hand, does not—not even a little.

Does Trump care that this made him look weak…when he is actually being strong? Does he care that Nancy will do a victory dance with all the pomp of Jezebel in the Old Testament? No he does not. Neither does God, He knows the real story. Just as He brought justice through Solomon, He will reveal the true villains in this situation.

When it became clear that the damage would escalate to the point of doing great harm to families—when he realized that this was not a real estate deal like the ones he mentions in his bestselling book—when he realized that Pelosi could care less if it lasted a year and completely destroyed people—he, like that mom in the Bible, gave up his right to be right.

To the 800,000 of you who will now get paid remember: It was Donald Trump and not Nancy Pelosi who put you before politics. And by the way…Donald Trump will get the wall.

Mr. President, even some of your own will turn on you now. But I know…more importantly God knows, what is deep in your heart—what you did, and why you did it.  I have never been prouder of you. God bless you.