Hurricane-Force Winds, Torrential Rain Forecast For What Could Be Storm Of The Decade

SAN FRANCISCO (CBS SF) — Sustained winds at or near hurricane strength in the highest elevations with gusts exceeding 100 miles per hour across the Sierra summit are forecast for Thursday, with Bay Area winds easily gusting past 50 miles per hour in urban areas and 70-80 miles per hour in the local mountains and hills in what could be the storm of the decade.

Computer models are able to break down the exact time of highest danger. By mid-morning Thursday, models indicate winds peaking.  Along the coast, 60 mile per hour winds are forecast, with higher gusts.

The term “hurricane” is only used to refer to tropical storms, and is used when sustained winds reach 74 miles per hour. That level of wind strength is possible at extreme elevations above 9,000 feet and higher Thursday, according to the National Weather Service warning.

KPIX 5 chief meteorologist Paul Deanno said, “Given the long-term drought and short-term saturated ground, many trees will lose the battle with the wind on Thursday.”

Deanno compares this week’s storms to other significant events saying, “For those of us who have lived here for a while, the potential of this storm is comparable to the ones in January 2008 and February 1998, both of which caused widespread wind & flooding damage.  As always, the forecast can change.”

The National Weather Service has issued a whopping 15 separate warnings and advisories for the system including a Flash Flood Watch, Gale Warning, Hazardous Seas Advisory, and High Wind Watch. Such warnings are typically issued about 24 hours ahead of the storm, but the near-certainty of this storm hitting and causing complications may have forced the early warnings.

Rainfall amounts above eight inches are forecast for the coastal ranges, triggering the Flash Flood Watch, an official notice to be looking for potential flooding. During the storm, these alerts will change from watches to warnings as actual floods begin occurring.

Rainfall amounts of over half an inch per hour are forecast, and if the storm slows, it could reach one inch per hour, causing serious flooding in the Bay Area.

Waves approaching 30 feet are predicted for surf breaks like Mavericks, and ocean swells will build to at least 20 feet by Wednesday, triggering the Small Craft Advisories and  Hazardous Seas alerts.  STORY: Wave Height Dangerously Growing    That link also includes details on high tides, where the seas will rise to meet the inundated rivers, creating even more flooding in low-lying areas like Sausalito and along the coast.

EDITOR’S NOTE: An earlier version of this story referred to “hurricane-force winds at 2500 feet.” That was referring to a computer model of theoretical atmospheric conditions in open air, not actual wind gusts that would impact structures and trees.  As stated above, wind speeds on the ground will not reach those levels in the Bay Area, but in the 9,000+ foot peaks in the Sierra they are forecast to reach those strengths. 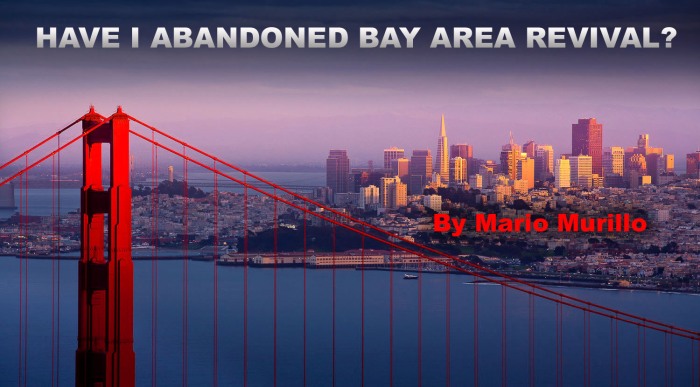 Have I Abandoned Bay Area Revival?

I have moved to Reno.  At the same time, there have come out the East Coast some renewed prophecies of the destruction of San Francisco.  Some have taken this to mean that I have abandoned the quest for revival in the Bay Area. Here is the real story.

Some pastors who embrace San Francisco values and believe it is never right to criticize Obama made it clear to me that I was no longer welcome in the Bay Area.  I did not take them seriously because they do not represent the overwhelming majority of ministers that I know and love in this region.

Their actions released me from a personal vow I made to defer to them on certain issues.  I am now free to confront those issues.

However, I am not released from the quest for Bay Area revival.  I do not agree with the predictions of doom over the city.  The prophecy that moves me is the word about revival that came through Bob Dylan.  It still burns in my soul! That is why we still own property in Martinez with an active prayer group there that meets every Wednesday at noon to seek revival.

I actually believe that our base of operation in Reno will make us even more effective in the Bay Area.  So, now hear this…if you want to win souls, heal the sick, pray for revival and launch outreaches in the San Francisco Bay Area we are your friend and ally.

In fact, we are returning Sunday November 2, 10AM and 6PM to Living Word Family Church to add fuel to the Santa Rosa Fire!

Everything within tells me that God is going to pour out His Spirit on the Bay Area and that is why He sifting His church. However, the time is short.  Those who refuse to speak the counsel of the Holy Spirit will be sidelined.  Those who have a heart to obey and confront evil will be given greater power!

Not only are we not abandoning the army of God in the Bay Area, we are re-positioning ourselves in order to be a greater force than ever in the quest for a moral awakening both in the Bay Area and all across America.