Why does the American Church think she is successful?  Her outward success hasn’t even tapped the brakes of our impending national disaster.  I wish I could say we had stopped the flood of filth and addiction.  I’d even be happy if I could say we had slowed the flood.  But no, as the flood rises, we take pride in how well we can keep people safe and dry in artificial arks of glass and stainless steel.  We celebrate things that are utterly irrelevant in the disaster that is even now at the door.

Across America, countless gleaming Christian campuses churn out activity at a dizzying pace.  Millions of dollars change hands to fuel methods that have zero impact on the enemy. The machine is manmade and utterly useless before the demonic principalities that are tearing our nation apart, limb from limb.

What right does this multi-faceted machine have to say it is effective?  What result can it point to as an example of victory over evil?

The ‘outward-success-machine’ that men have built is not of the Holy Spirit.  It runs on toxic fuel.  Every day we witness the toxicity evidenced in the tragedies of celebrity leaders who are crashing and burning. Why, you ask?  Because this fuel can neither feed the soul of a preacher, nor can it replenish their spirit. 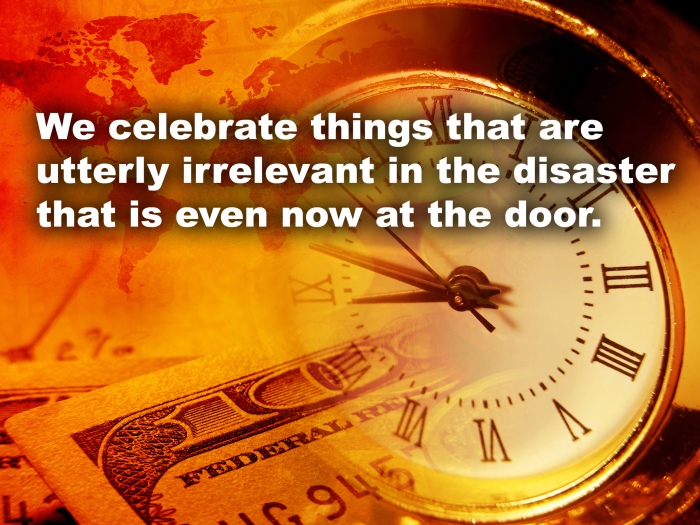 Too many ministers are conditioned to drawing life and self-worth from the adulation of the crowd, instead of receiving fulfillment, power and peace from a life of prayer.  As a result, instead of living in the presence of Jesus and beholding His face, they have grown an unnatural heart that is capable of celebrating hollow successes that they should be ashamed of.

They are thrilled when thousands come to hear them, when they should be crying out in agony.  It is a destructive talent indeed to be able to gather thousands and leave them untouched by conviction.  Few, if any, ever repent under the influence of their ‘seeker friendly’ sermons—a repentance that could have been the budding of the first leaf toward a national awakening.

The devil doesn’t respect personality, human initiative, or feel-good sermons. He only respects the anointing.  He does not stop advancing in the face of concocted-Christianity.  But Satan is absolutely paralyzed before a word that issues forth in power and anointing directly from Jesus, Who is the Head of the Church—the devil only flees before a rhema word that is launched by a pure and anointed member of Jesus’ body on Earth, the Church. 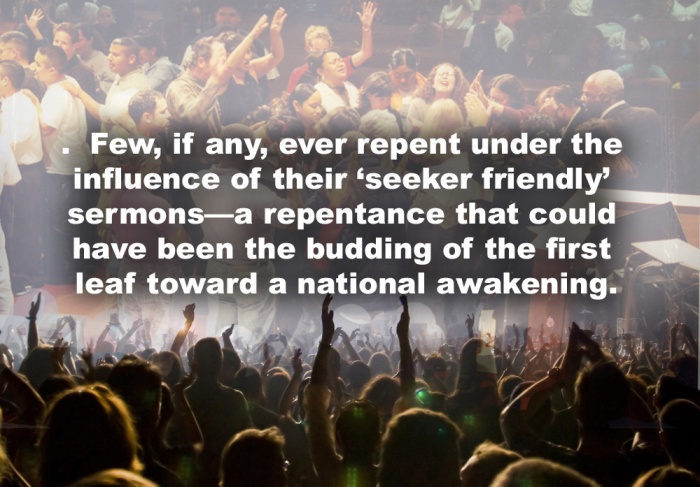 Nothing fits our current condition better than the picture I am about to portray:

Jesus is seated on a donkey, the traditional manner in which the kings of Israel announced their reign.  He is on His way from the Mount of Olives toward Jerusalem.  A roar of adulation not heard since King David returned from a victorious battle shakes the great city. The masses are saying all the right things, “Hosanna! Save us now!  Blessed is He that comes in the name of the Lord!”  The roar is so great that the Jewish religious leaders implore Jesus to tone down the masses.  He tells them that if He did, the very rocks would cry out.

All of His disciples and core believers must have thought, “This is it.” They have been secretly hoping that Jesus is about to set up an earthly throne, conquer the Romans, and return Israel to its former glory. But strangely, even as the joy of the crowd is overwhelming, Jesus begins to weep.  He knows this is too little, too late.

Luke 19:41, “Now as He drew near, He saw the city and wept over it, 42 saying, “If you had known, even you, especially in this your day, the things that make for your peace! But now they are hidden from your eyes. 43 For days will come upon you when your enemies will build an embankment around you, surround you and close you in on every side, 44 and level you, and your children within you, to the ground; and they will not leave in you one stone upon another, because you did not know the time of your visitation.”

The roar of our concerts; the glitz of our technology; the grandeur of our meeting places, our modernization of prayer, and even our New Age-like fascination with the gifts of the Holy Spirit is all a shallow grave.  It has the trappings of being of God, without the engine of God driving it.

By what authority do we claim that ‘church-incorporated’ has the power to save America?  Please enlighten me.  I am all ears.  Moreover, if my words offend you, but they don’t even move you to check your heart, doesn’t that alone bespeak our tragedy?

America will not be saved by shallow thrill seekers. Satan laughs at the antics that distract us in this hour as we stagger toward disaster. But is it also too little too late for us?

But wait…what is that I hear?  I hear a rumble—so faint at first.  YES!  It is the sound of a mighty God Who will not share HIS GLORY WITH ANY MAN!  He would save America His way!  He is at this moment rolling up His sleeves to intervene, and in a most embarrassing way—a way that will bring people we don’t like, who are doing things we didn’t expect, in the places we had written off…

I am addressing those who are, or who desire to be, honest vessels of God: Take heart, you who have been forgotten—you who have been run over by the tractors of Church-incorporated.  Our heavenly Father has not forgotten you, far from it!  He is right now preparing to grant power, fire and miracles! Hallelujah!

Mario has a new book! Listen to what Pastor John Kilpatrick, who led the Pensacola Revival, said about Mario’s  book:

“As I read the manuscript for Mario Murillo’s new book, Vessels of Fire and Glory, I said to myself, “Finally!” Mario has measured the church and the nation in this season and did not hold anything back. His honesty is like the sun rising inside a dark cave. This release is a paradox—it is sobering and refreshing; it is symptoms and the cure. I believe this revivalist has penned a treatise that should be in the hands of all who lead the work of God.”