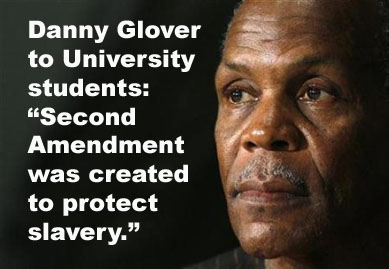 I am asking you  to read the account of Danny Glover’s incendiary remarks about the Second Amendment and even look at the video where he says that it was designed to protect slavery.   In fact, the Second Amendment does the very opposite of what he says, it protects us from becoming slaves to the government!

Before you read it I want to ask you to read this important message:

Why are you doing this Mario?  Why the relentless stream of articles and comments against the current agenda in the United States?   Simple answer: YOU MUST BE WARNED!

Mario why are you taking on so much?  My answer: because my timid colleagues have taken on so little.  America is racing toward an immediate future where personal freedom is plowed under by the blind worship of government.

Today’s warning comes from Abraham Lincoln who said, “What is taught in the classroom today will be the government of tomorrow.”  What I am warning you is that tomorrow is already here.

Think about it: Texas A&M resides in the most pro-gun state in the Union and they are loudly and boldly pushing for a change or outright removal of the U.S. Constitution starting with the Second Amendment.  Ask yourself, “If that is what universities are saying in Texas, what is going on in the rest of the nation’s college and university classrooms?

Here is what is going on: Georgetown University constitutional law professor Louis Michael Seidman said, “As the nation teeters at the edge of fiscal chaos, observers are reaching the conclusion that the American system of government is broken. But almost no one blames the culprit: our insistence on obedience to the Constitution, with all its archaic, idiosyncratic and downright evil provisions.”

Students across America are being taught as if it were fact that we need to remove the U.S Constitution in order to progress as a nation.

What the video shows is an aging actor taking leave of his senses and being treated as if he were some insightful sage on the subject of the Second Amendment.  Danny Glover has spewed many strange things in the past but this, hands down is his most outrageous flirtation with insanity.

Danny Glover is being taken seriously by Texas A&M which refuses to allow opposing voices.  This demonstrates where higher education is in our nation.

Okay, sit down and try to absorb this statement: Sandy Hook Massacre was a horrific tragedy that has been hijacked to sway the nation to remove the second amendment from the constitution;  not by outright amputation but by a thousand paper cuts.  Once again let me say that the Second Amendment is a firewall that stops government from taking over the people and their freedoms.

We are being systemically prepared for the day when America has no bill of rights.  Laugh, scoff or deny it, but it is a fact, and it is a fact that will affect every Pastor, Christian and all future generations.

Perhaps the greatest threat to American Christian comes from within our own ranks:  On the one hand there are those that use end time prophecy to be passive about these events because in their mind there is nothing we can do about it and it is supposed to happen. The other threat is the current abuse of Grace that stretches the truth so far that Christians are left apathetic to do anything to bring revival and especially repentance to our nation.

My take is that we can do something about it, that God wants us to act and that we will have no one to blame but ourselves if we do not.

The Constitution’s Second Amendment was created to bolster slavery and capture land from Native Americans, award winning actor Danny Glover told a group of students at a Texas A&M sponsored event on Thursday.

Actor Danny Glover told students at Texas A&M University the intent of the Second Amendment was to protect slavery.

“I don’t know if you know the genesis of the right to bear arms,” he said. “The Second Amendment comes from the right to protect themselves from slave revolts, and from uprisings by Native Americans.”

Glover, best known for roles in the “Lethal Weapon” franchise and “Angels in the Outfield,” was addressing students at an event being held in honor of Dr. Martin Luther King Jr.

Director of Texas A&M’s Memorial Student Center, Luke Altendorf, told Campus Reform on Friday that the university was unaware of Glover’ talking points prior to his speech.

“I had no idea, we really didn’t know that topic was coming up,” he told Campus Reform. “Someone was asking a question about activism, I think that’s where some of that came from.”

Altendorf declined to say if, or how much the school had paid for Glover’s speech, but said student fees were not used.

“We didn’t feel those speakers you are referring to are bad decisions on these topics because we want to foster discussion,” he said.

The video recording of the event was captured by members of a student group, the Texas Aggie Conservatives (TAC). That group has also created an online petition blasting Texas A&M for its speaker selections.

“It should be a time for real reflection and respect,” he said referring to the memorial breakfast for King. “Instead, the university pushes a political agenda.”

Schroeder also called on university President Bowen Loftin to make up for the event by inviting a conservative speaker of equal star power.

“We expect President Loftin to stand by his commitment to diversity and fully support our efforts to bring in a conservative speaker to provide an alternative to Mr. Glover’s far left message” said Schroeder.