The leading newspaper in the nation has not mentioned Christmas in 10 years. Christmas is attacked by both God haters and religionists. It has fallen into great disfavor—accused of everything from paganism to materialism. It is socially unacceptable to celebrate Christmas.  It is 1843 England. Also known as the hungry 40’s.

A young and gifted writer is deeply restless and can’t sleep. He asks an assistant to meet him in the middle of the night, “take me to see the worst of London. Do not spare me anything.”

What he saw horrified him and left a mark in his soul that would haunt his novels for the rest of his life. Children, living like stray dogs scavenged through garbage in sub-zero temperatures.

Charles Dickens had to do something. So, he mustered his considerable weapon: he marshalled the English language and sent it into war against child abuse. Vast corruption must be exposed! This nation-destroying curse must be lifted! 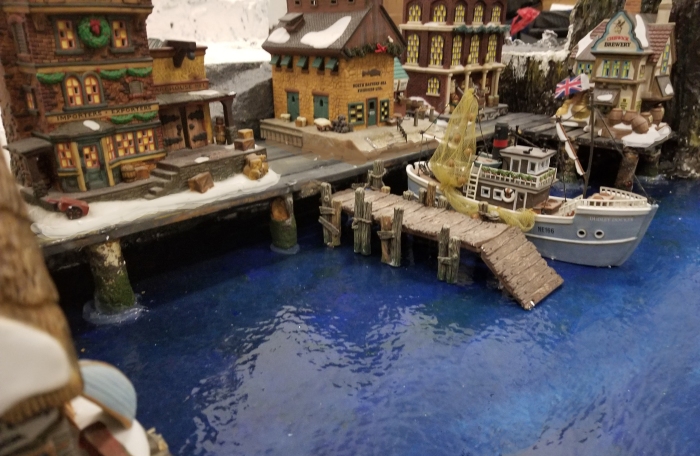 He set ink to paper with the force of a volcanic eruption and the skillful cuts of a surgeon. The result was a pamphlet entitled An Appeal on Behalf of the Poor Man’s Child. Then something happened:

He never released the pamphlet. Historians are divided about why. Usually, it does not fall upon facts but on anti-Christian bias. Here is what really happened: He heard the voice of God. “If you release this pamphlet it will bring good for a season, but if you write the story, I am about to give you, it will bring good for all time.”

It would be a story where the main character is the most uncompelling, and unsympathetic character to any audience: an old man—a wealthy miser! Even his name is off-putting: Ebeneezer Scrooge.

With only weeks left before Christmas how could he finish it and get it published? Astonishingly it was published on December 19, 1843. Not only that, it was made into a script and opened in 2 theaters that Christmas day.

This story is not only credited with saving Christmas, it has been synonymous with Christmas ever since.  Outside the Bible, no written word about Christmas has been more influential and widespread in its power to evoke love for children and the poor.

Christmas has inspired the best music. Musical artist regardless of their fame are compelled to release a Christmas album. It has a power that no one can explain or predict. Opposing armies have stopped combat, met on neutral ground in the middle of a war to celebrate Christmas.

Here is Nephew Fred from A Christmas Carol: “I have always thought of Christmastime… as a good time: a kind forgiving, charitable, pleasant time: the only time I know of, in the long calendar year, when men and women seem by one consent to open their shut-up hearts freely, and to think of people below them as if they really were fellow-passengers to the grave, and not another race of creatures bound on other journeys.”

The supernatural power of Christmas is also seen in the creation of Silent Night. It was written because the organ broke and a song for a guitar was necessary.  Christmas again showed its power with Handel’s Messiah. Handel wrote it in 24 days. When he finished the Hallelujah Chorus, he said it was as if the roof came off his room and he saw the great God Himself.

Christmas is a weapon! It brings proof of the Deity of Christ by its inexplicable effect on the world. Even when it offends it is doing God’s work. Even Scrooge screamed, “then let me leave it alone!” But Christmas won’t let us leave it alone.

But the message about Scrooge transcends even Christmas. It is about God’s power to create a weapon to combat evil through anointed artforms.

It is because of Scrooge, that I find much of today’s formulaic Christian music unimaginative, predictable, and even snowflake like. Bono from U-2 called it “dishonest.” How dare I make such a criticism? Because we didn’t use to scare so easily. We wrote songs of sacrifice and commitment; towering themes filled majestic hymns.

Somewhere in the mid to late 20th Century the church developed an insecurity complex and began to “do things almost as good as the world does.” Not just in music, but in all art forms. We even have green rooms which is a nod to Hollywood.

A great exception is Black Gospel Music. It was so original the world had to copy it for Motown and R and B. Black Gospel was so powerful the world kept trying to steal talent out of the church. Aretha Franklin, Whitney Houston, and many others began in church.

The spark of divine creativity does not rest on those who surmise what might sell or what won’t offend. It comes on those who would sacrifice all to obey God.

However, there is another reason creativity is in short supply: We don’t recognize the multiple opportunities of service outside the pulpit. Not everyone is a preacher—nor should they be! The gifts of God fit in business, art, media, healthcare, education and yes, politics.

Because God came upon a famous novelist like Charles Dickens, the devil was blindsided. What if you are supposed to create something no one has seen before?

Finally, the idea that we need to tone anything down to win souls is hogwash. Johnny Cash comes to mind. It is truly amazing the influence he carried. Bob Dylan, Elvis, the Beatles, and the Rolling Stones revered him. Yet, he never muted his faith or his witness. God gave him a sound the world couldn’t resist.

A heart filled with love for God and hatred for evil, who is willing to be completely open to do something new is our greatest need today. God is searching to drop original miracles on someone like you.

I don’t golf. I don’t collect cars.  So, I learned how to make a village that told the story of Scrooge.  I hope you enjoy my little village video and the pictures.

In 1843, Dickens was the most famous writer in England.  Early that year, he made a strange request.  “Show me the most horrible parts of London.”  He set out with a guide late one night.  He thought he had steeled himself for what he might see. But nothing could have prepared him for the unbridled horror of seeing abandoned children living like animals in sub zero weather. 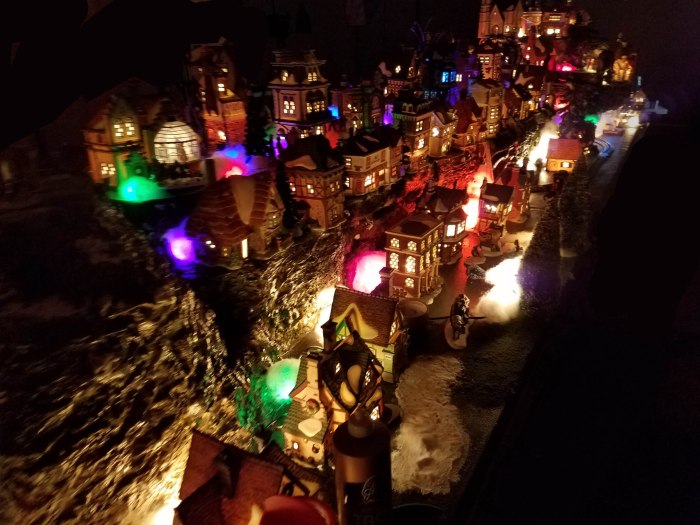 When and how the miracle happened is a matter of debate.  Many say that God gave Dickens a special message.  God told him his pamphlet would only have a limited impact but an original story would have endless impact.

Thus he created the sledge—hammer:  A Christmas Carol.

The following are excerpts for Charles Dickens info.com

It only took Dickens about six weeks to write A Christmas Carol.  Tiny Tim and Bob Cratchit helped speed up the process.  When Dickens wrote he “saw” his characters much like the way that young Ebenezer Scrooge saw the characters from the books he had read.  As Dickens wrote A Christmas Carol he said that the Cratchits were “ever tugging at his coat sleeve, as if impatient for him to get back to his desk and continue “the story of their lives”.

“Old Marley was as dead as a door-nail.”   This line appears toward the beginning of the novel.  Dickens included this because of a dream.  He had dreamt that one of his good friends was pronounced to be “as dead Sir . . . as a door-nail”.

The Cratchit family is based on Dickens’ childhood home life. He lived in poor circumstances in a “two up two down” four roomed house which he shared with his parents and five siblings. Like Peter Cratchit, young Charles, the eldest boy, was often sent to pawn the family’s goods when money was tight. Like many poor families, the Cratchits had nothing in which to roast meat. They relied on the ovens of their local baker which were available on Sundays and Christmas when the bakery was closed.

A Christmas Carol was first published in 1843.  Initially six thousand copies of the book were printed.  More copies were ordered after the first printing was sold in only five days.

Why does the story of Scrooge impact me so deeply?  First, it gives me—as well as most who have heard the story—a deep need to help the poor.

However, it hits me just as hard in another way.  It shows the power of creativity with a cause.  It shows us that we can be original without softening the blow of truth.  It shows us that God can deliver a sledge hammer to a corrupt culture in ways we never imagined. 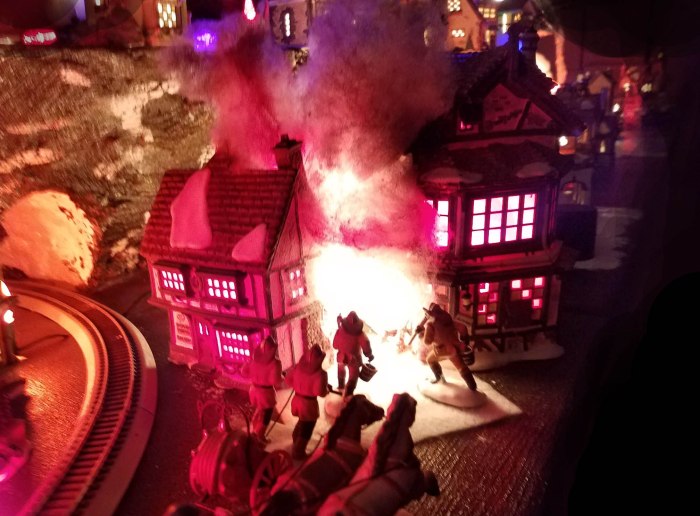 Scrooge rebukes cowardly Christian celebrities who can’t declare the whole counsel God and think it they are being creative when they hide truth.

Scrooge is also a spanking to the lazy preachers who refuse to press in and find a fresher way to deliver timeless truth.  We are not supposed to give out the truth like a cold plate of stale food.

Scrooge reminds us that God stands ready to give us power to pierce a culture with new weapons that are both fresh and effective.