Last night a woman who wore pain like a body suit was instantly healed.  The list of agonies included is too long to list here.  She stood up in obedience to the Holy Spirit and it looked as if she was struck by lightning.  I asked her “can you walk?”  She roared at me, “walk?!… I can run!”  With that she electrified the audience by sprinting across the front leaving all of her diseases behind. 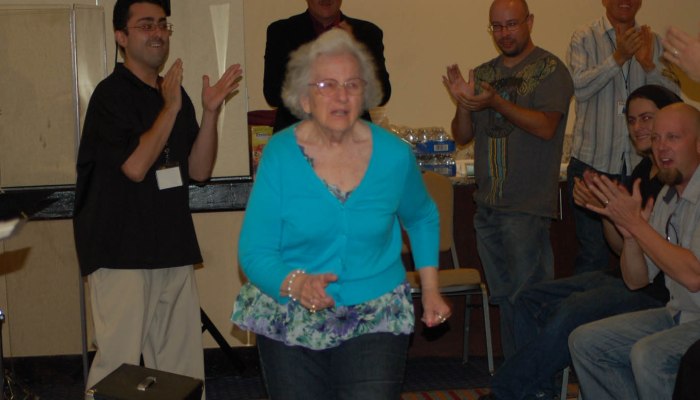 Another man is standing a preacher and a leader.  He is battling disease.  He so wanted to believe that the word from the man of God was accurate…that is when he heard “not only your heart, back, legs and spine but your ears are being healed.”  He heard through his new ears and his hands shot up to give glory to God for his total healing. 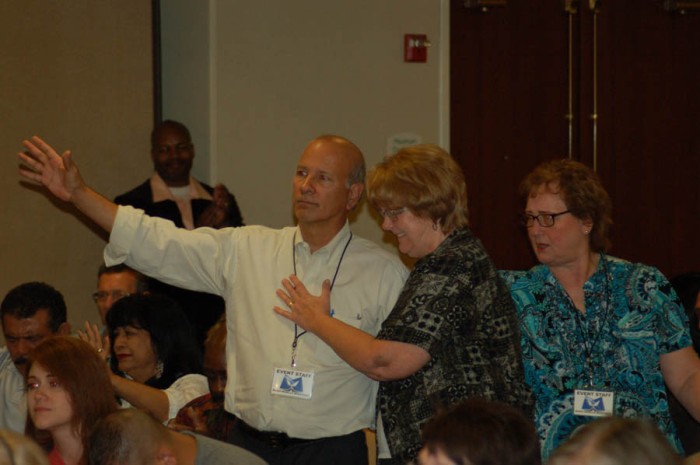 Another woman came desperate for deliverance from addiction and torment.  We do not usually call out lost souls in the middle of a meeting but this time she was called and told to receive Christ.  She, now saved, proceeded to experience supernatural deliverance.  Her blood, teeth, limbs all came under the power of Jesus! 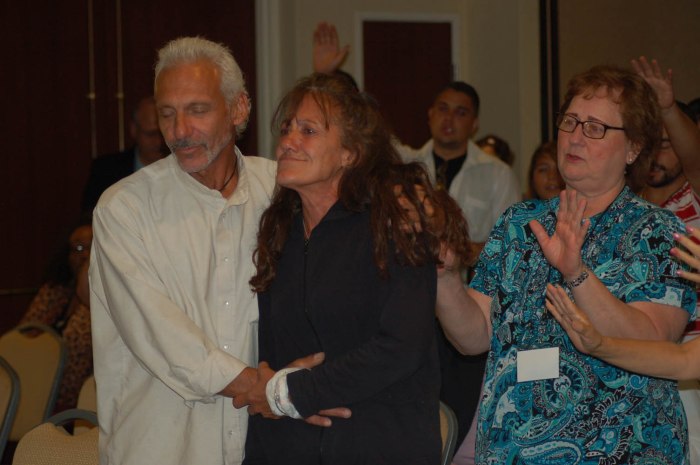 The evening ignited with R.C. and Laurie Carrillo joined by the band from the ARC led worship.  Our concern over the attendance was severe because we had never crusaded in Fairfield before.  That concern was trampled by the capacity crowd that came eager for a miracle.

I preached about taking America back.  I gave the timeless message of Jesus and the Holy Spirit drove it into the hearts of the unchurched. They quaked with conviction and the floodgates opened as they came instantly to fill the front to receive eternal life from Christ. 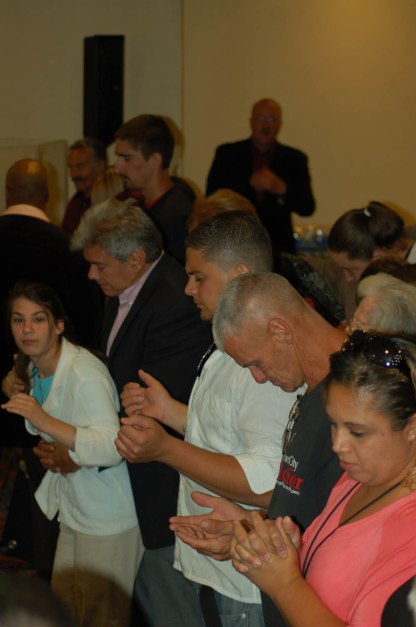 By the end of the night dozens declared how their disease had vanished.  Story after story of supernatural miracles unlocked an atmosphere of glory and explosive celebration.

We did not know how to end the meeting.  In an instant a healing army was born and they were ready to go out and get others for tonight!  Even as I am writing this, soldiers of Jesus are combing the community for souls.  Already they are arriving for the meeting tonight at 7PM.

We will be forced to start early.  We cannot tell what God may do in the next few hours…one thing is certain…and no one could have said it better than the pastor who walked up to me and said, “Mario, God is rocking Fairfield!”

Tonight is the final night!  Doors open at 6PM 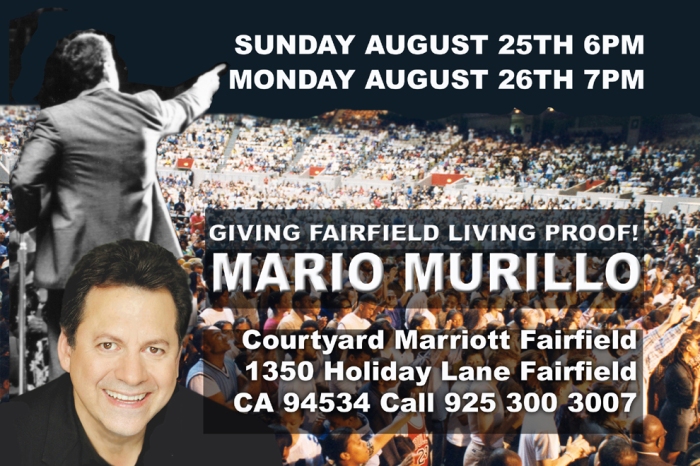 Is it right to offer  miracle healing to a skeptical public?

TODAY WE ARE BEGINNING TWO NIGHTS OF MIRACLES IN FAIRFIELD CALIFORNIA.   THE FACT THAT WE WILL PRESENT DIVINE HEALING BOTH NIGHTS HAS PROMPTED ME TO REPOST  THIS BLOG.

When that young campus radical put his hands on my throat, I know that neither he nor I understood the rage in his hands.  Evil understood clearly what was at stake.  It knows all about the souls that can be saved and the bodies that would be healed when any miracle ministry, anywhere is born.

There is a good reason why my mind raced back to that fateful day in Berkeley.   All afternoon I paced and prayed on the hillside above the campus of 44,000 students.  Two violent forces were colliding within me.  The burning question?  How do I reach a generation of students bent on Marxist revolution?  What reminded me of that day?   The fact that we are now dealing with a White House that is bent on Marxist revolution.

On that hill so many years ago one voice argued that I must study the great modern apologists of the faith.  I should immerse myself in Francis Schaeffer, C.S. Lewis, and G.K. Chesterton.   The other voice said simply, “it is not by might nor by power but by my spirit.”

That night I would get my answer in a most emphatic way.   It happened in front of the Student Union Building of Cal Berkeley at about 11PM.   I was sharing my “apologetic faith” with a flower child.  In the darkness, I could not see the angry radical who was stealing up behind me.

This atheist Goliath grabbed me by the neck and proceeded to choke the life out of me. Now the words of great Christian intellectuals were useless.  There was a demon fueling his rage.

God ordered me to take my stand in the power of the Spirit. In my own faltering way I did.   My assailant suddenly stopped and stood stunned by something behind me in the shadows.  To this day I do not know what startled him, I only know that I ran, and as I ran I affirmed my commitment to the Supernatural Gospel of Christ. 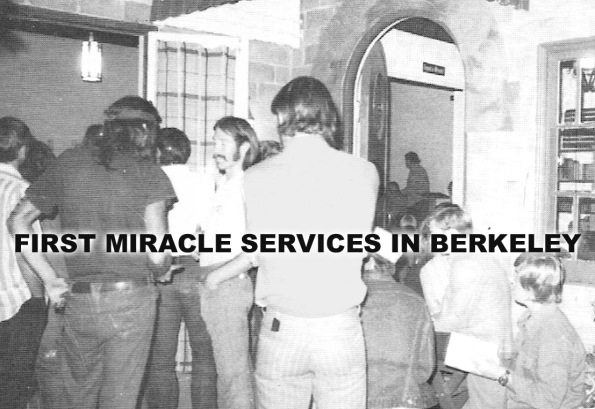 The world began to change when Jesus stood and read these words from the book of Isaiah:  Luke 4: 18 “The Spirit of the Lord is upon Me, Because He has anointed Me To preach the gospel to the poor; He has sent Me to heal the brokenhearted, To proclaim liberty to the captives And recovery of sight to the blind, To set at liberty those who are oppressed; 19 To proclaim the acceptable year of the Lord.”

He was announcing the start and the content of His miracle ministry and He did it publicly.   Here are 6 targets of His ministry:

Give good news to the poor.

Proclaim liberty to the captives.

Recovery of sight to the blind.

To set at liberty those who are oppressed.

To declare the time of God’s favor.

2.  He announces by what authority He is announcing this.

“Today this scripture is fulfilled in your hearing.”  What an astounding statement that is!   Every Jew knew that verse.  Everyone in Israel has been waiting for that verse to be fulfilled and Jesus flat out says that He is fulfilling it. Talk about raising the hopes of the people!

Yet it is right that He does this so that the miracles can be released.  And that is precisely what the Church of Jesus should do.  We must go public about the resurrection of Jesus did to the works of Satan and all of the benefits of the Gospel.

3.  God was with Him in this project. Acts 10:38 says, “Jesus went about doing good healing all who were oppressed of the devil for God was with Him.  Jesus was not acting on His own initiative. 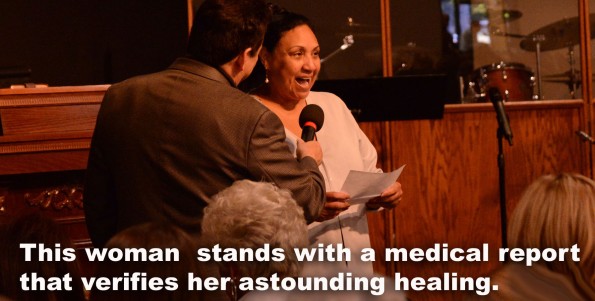 Likewise, we are the continuation of Christ’s war on the works of Satan.  We too must make a public announcement, we must set the time and the place that the Holy Spirit has designated for the supernatural to appear.

Having settled the question in Berkeley we announced our first healing rally.  I was such a newbie that I stood in front of the audience frozen in fear.  What I did not know yet is that God rewards those who show up for war.

In the crowd was a young man lying unconscious on a couch at the back of the chapel.  He had shot a mixture of LSD and Heroin and it made him comatose.   Supernaturally, he woke up and his symptoms vanished.   He came to the front and knelt in utter adoration of God.   This single healing launched ten years of harvest on that university campus.

So today I am in prayer because we have gone very public in the East Bay Area of Northern California.  Thousands of card invitations have been given directly to the public and they plainly state that miracles will happen in the meetings.

If this was a human endeavor I would be panicking right now instead I am clothed with a divine peace.  Nothing man can say or do will be able to undo the conviction that I feel that this is a God event.

Let Church leadership everywhere listen from their heart.  If ever I knew that Jesus was trying to get a message through it is this:  Seek Him now.  Set a date at His bidding.  Prepare your people for signs and wonders.  Vow to give all glory to God.  Invite to public to come and see the awesomeness of our God!

P.S. Latest news from Fairfield:  People are coming from hundreds of miles around to receive.  Do not let distance or anything else keep you from an appointment with a miracle.  On Sunday we will open the doors at 5:30PM sharp and on Monday at 6:30PM.  I cannot overstate these two things: 1. If at all possible bring someone who needs a miracle or needs to know that they are real.  2.  If you need any help at all call us at 925 300 3007.